Three types of phloem loading have been defined in plants: 1.) “active apoplasmic” loading, in which sugar transporters are responsible for the active uptake of sugars into the sieve element companion cell complex (SECCC) which is believed to be symplasmically isolated; 2.) “passive symplasmic” loading, in which numerous plasmodesmata (PD) along the phloem-loading pathway enable sugar diffusion into the 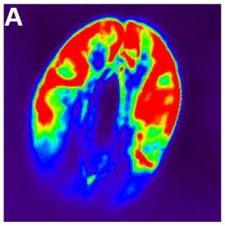 SEs, with the result that active processes are not directly involved in phloem loading; and 3.) “active symplasmic” loading, in which sugars can diffuse into the SECCC, where they are actively oligomerized. This prevents their diffusion back into the surrounding leaf cells. Although the degree of cell coupling by PD is a defining feature of the mechanisms involved in phloem loading, it has been quantified in only a handful of species.  These considerations prompted Liesche et al. (10.1104/pp.18.01353)

to compare PD density, structure, and function in the leaves of nine species, representing the three phloem-loading types currently hypothesized. PD density, as determined by electron microscopy, did not correlate with permeability as assessed by quantifying the intercellular movement of a fluorescent tracer with similar diffusion properties to Suc. These results suggest that PD substructures not visible on standard transmission electron micrographs may have a strong influence on permeability. Another surprising finding of this study is that the ultrastructure of active apoplasmic loaders reveals a high number of PD between phloem and surrounding cells. Furthermore, fluorescent tracer experiments showed a low but significant degree of coupling, indicating that even in active apoplasmic loaders, the SECCC is not completely isolated. The results of the present work also lend support for the occurrence in four tree species of passive symplasmic loading, the most controversial of the three proposed mechanisms of phloem loading.