Gamete formation in sexually reproducing plants begins with formation of a “mother cell” that undergoes meiosis to generate haploid spores. Haploid spores further develop into gametophytes within which gametes differentiate. In flowering plants (angiosperms), including crop systems, the female mother cell, called the “megaspore mother cell” (MMC) develops within ovules that grow out of the placenta of carpels. A single MMC forms per ovule from a hypodermal cell located at the apex of the ovule. MMC formation is a key step in plant sexual reproduction as it conditions the production of gametes. Due to its importance as the precursor of the seed, which is a main source of food, ovule development in angiosperms has been the topic of much research (Drews and Koltunow, 2011). In spite of this interest, few mutants affected in MMC formation have been isolated and characterized to date. As a result, what defines the MMC identity remains much of a mystery. 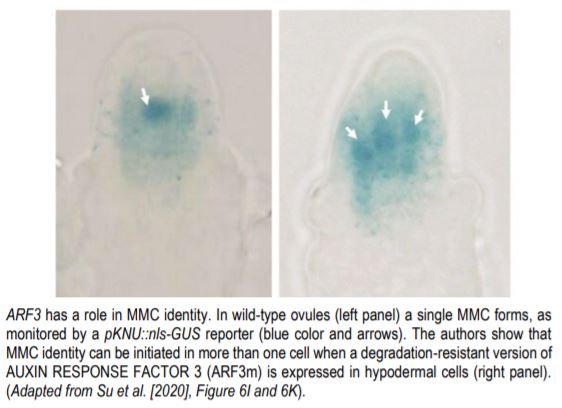 In recent years, identification of new factors involved in MMC differentiation have sparked a renewed interest in ovule development as a model for organ formation and patterning (Pinto et al., 2019). The discovery of a pathway restricting MMC identity to a single cell in ovules in Arabidopsis thaliana was particularly striking (Olmedo-Monfil et al., 2010). The pathway comprises the small RNA processing genes ARGONAUTE 9 (AGO9) and RNA DEPENDENT RNA POLYMERASE 6 (RDR6). This pathway generates and utilizes 24 nucleotide-long siRNAs that essentially silence transposable elements. In ago9 and rdr6 mutants, a proportion of ovules develop more than one enlarged hypodermal cell. However, these extra MMC-like cells largely fail to enter meiosis and rarely produce functional female gametes. Furthermore, the frequency of the phenotype is not fully penetrant in these mutants, suggesting that additional factors remain to be identified.

To identify these factors and characterize the pathway further, the groups of Xuemei Chen and Yuan Qi performed a genetic screen for enhancer mutations in the rdr6 background (Su et al., 2017). They uncovered mutations in TEX1 that encodes a subunit of a conserved complex that exports small RNA precursors out of the nucleus to be processed. They further found that TEX1 represses AUXIN RESPONSE FACTOR 3 (ARF3). ARF3 encodes a transcription factor that is activated in the presence of the plant hormone auxin which regulates cell growth and differentiation. In wild-type, TEX1 restricts ARF3 protein synthesis to the median domain called the chalaza. In absence of the repressive signal, the authors detected ARF3 protein in the apical part of the ovule, called the nucellus. This indicates that ARF3 is sufficient to promote part of the MMC identity program when expressed in the nucellus.

Chen and Qin then sought to identify in which cells of the nucellus does ARF3 function to promote MMC identity? Is it a direct (cell-autonomous) or indirect (non-cell-autonomous) effect? To answer this, Su and colleagues used a non-degradable ARF3 mRNA (ARF3m) that enables ARF3 protein synthesis in the nucellus, and which mimicked the tex1 mutant phenotype (Su et al., 2017). Using different promoters to drive ARF3m expression in wild-type, the authors observed that whereas expression or ARF3m in epidermal cells had little effect, expression of ARF3m in hypodermal cells surrounding the MMC triggered MMC identity in these cells (see figure). These results establish that ovule hypodermal cells, but not epidermal cells, are “competent” to acquire MMC fate and that ARF3 functions cell-autonomously. However, using a similar approach, Su and colleagues mapped the origin of the small RNA signal to epidermal cells of the nucellus.

The authors thus identify a mobile RNA signal that establishes a boundary between the nucellus and the chalaza; this same signal prevents ARF3 expression in hypodermal cells surrounding the MMC. This work shows that the angiosperm ovule, contrary to its apparent simplicity, is an intricately patterned and complex organ. Furthermore, Su and colleagues identify a direct inducer of MMC identity, suggesting that ARFs and auxin may control early steps of MMC differentiation in plants. 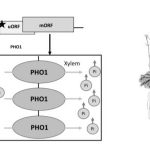 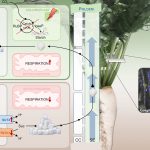