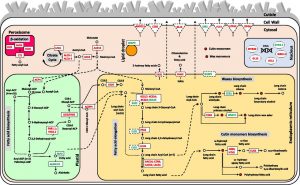 The outer surface of the aerial parts of land plants is covered by the cuticle, a waxy layer that provides a barrier against damage caused by environmental factors as well as  protection against non-stomatal water loss. Castorina et al. (10.1104/pp.20.00322) now show that both cuticle deposition and cuticle-dependent leaf permeability during the juvenile phase of plant development are controlled in maize (Zea mays) by the transcription factor ZmFUSED LEAVES-1 (FDL1). Lack of ZmFDL1 activity in the fused leaves1-1 (fdl1-1) mutant specifically affects seedling development at early developmental stages and results in organ fusions due to the lack of cuticular material in the boundary between organs and irregular distribution of wax crystals on young leaf epidermal surfaces. To gain further insight into the role of ZmFDL1, the authors compared the cuticle composition of mutant and wild-type seedlings and analyzed the impact of the mutation on the transcriptome during early phases of seedling development. They also investigated ZmFDL1 involvement in controlling cuticular permeability and in mediating drought stress response in maize seedlings. Their biochemical analyses reveal that among cutin compounds, w-hydroxy fatty acids and polyhydroxy-fatty acids were specifically affected, while the reduction of epicuticular waxes was mainly observed in primary long chain alcohols and, to a minor extent, in long-chain wax esters. Transcriptome analysis allowed the identification of candidate genes involved in lipid metabolism and a hypothetical construct  of a proposed pathway for cuticle biosynthesis in maize. Lack of ZmFDL1 affects the expression of genes located in different modules of the pathway. Overall, their results indicate that the response to water stress involves the activation of wax biosynthesis and the involvement of both ZmFDL1 and abscisic acid regulatory pathways.  The functional characterization of the ZmFDL1 regulatory gene presented here sheds light on the molecular mechanisms underlying cuticle-mediated drought stress tolerance in maize.

Biosynthesis of Montbretin, an Anti-Diabetes Drug 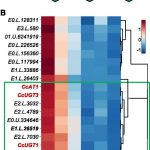 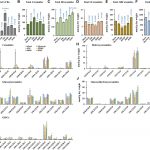 Sphingolipids and Plasmodesmata
Scroll to top