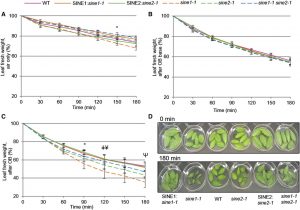 site where the INM and ONM meet forms the nuclear pore, where nucleocytoplasmic transport occurs. Spanning the INM and the ONM are protein complexes known as “linkers of the nucleoskeleton and cytoskeleton (LINC).” LINC complexes contribute to nuclear morphology, nuclear movement and positioning, chromatin organization and gene expression. LINC complexes are composed of Klarsicht/ANC-1/Syne Homology (KASH) ONM proteins and Sad1/UNC-84 (SUN) INM proteins that interact in the lumen of the nuclear envelope (NE), thus forming a bridge between the nucleoplasm and the cytoplasm. Plant-unique KASH proteins have  recently been identified and named “SUN domain-interacting NE proteins” (SINE1 to SINE4 in Arabidopsis). In Arabidopsis leaves, SINE1 is exclusively expressed in guard cells and their developmental precursors. Biel et al. (10.1104/pp.19.01010) have now established that SINE1 and SINE2 play an important role in stomatal opening and closing in Arabidopsis. Loss of SINE1 or SINE2 results in ABA hyposensitivity and impaired stomatal dynamics but does not affect stomatal closure induced by the bacterial elicitor flg22. The ABA-induced stomatal closure phenotype is, in part, attributed to impairments in Ca2+ dynamics and F-actin regulation. Together, the data suggest that SINE1 and SINE2 act downstream of ABA but upstream of Ca2+ and F-actin. This study makes an unanticipated connection between stomatal regulation and nuclear envelope-associated proteins and adds two new players to the increasingly complex system of guard cell regulation.

Open Sesame! Uncovering a Hidden Key Used by Pathogenic Bacteria to Open the... 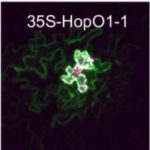 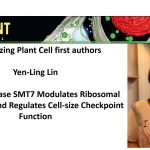