It has been known for several decades, and suggested as early as the 1930s (Caldwell 1931), that viruses move their proteins and other molecules from one plant cell to the next by altering and regulating plasmodesmata (PD), the tiny doors connecting the cytoplasm between plant cells. And only in the past decade (Khang et al. 2010) have scientists discovered that fungi are doing the same. But, apparently, pathogenic viruses and fungi are not the only ones who know how to modulate PD for spreading virulence signals between cells. Aung et al. (2020) demonstrate, in a groundbreaking study, that pathogenic bacteria have also found a way. 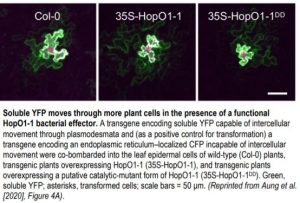 HopO1-1, a putative mono-ADP-ribosyltransferase effector injected into host cells by the bacterium Pseudomonas syringae pv. tomato (Pst) DC3000, was found to increase virulence by interacting with and causing proteasomal degradation of two of the eight Arabidopsis PD-localized proteins (PDLPs). These two PDLPs, PDLP5 and PDLP7, were found to interact with HopO1-1 via their C-terminal cytoplasmic tails. However, PDLP7 appears to be the main target of HopO1-1: it was degraded to a greater extent than was PLDP5, and only PDLP7 levels were reduced following Pst DC3000 infection. Degradation of PDLP7 was found to require arginine residues, known targets of ribosylation, in its cytoplasmic tail. A strain of Pst DC3000 lacking HopO1-1 (ΔhopO1-1) exhibited compromised virulence and failed to reduce PLDP7 levels upon infection. Additionally, both single-knockout pdlp5 and pdlp7 mutant plants were more susceptible to Pst DC3000 than were wild-type (WT) plants and single-knockout pdlp4 and triple-knockout pdlp1/2/3 mutant plants.

Strikingly, the downstream effect of HopO1-1–induced PDLP7 degradation appears to be an increase in intercellular molecular flux, which very well may serve as a general mechanism whereby pathogenic bacteria spread virulence-promoting signals through plants. Via an elegant experiment using particle-bombardment delivery of transgenes into leaf tissue, it was determined that soluble yellow fluorescent protein (YFP) transiently expressed in single cells traveled more often and further to neighboring cells in Arabidopsis plants overexpressing HopO1-1 than in both WT plants and plants overexpressing a version of HopO1-1 that is mutated at its two putative catalytic-site residues (see figure). HopO1-1 seems to exert its influence on molecular flux without drastically affecting the size exclusion limit of PD, as the movement of 2×YFP into neighboring cells was significantly reduced to a similar level in both transgenic HopO1-1 and WT plants, and 3×YFP did not move at all into neighboring cells.

Many questions remain to be answered regarding how, exactly, HopO1-1 influences signaling through PD and alters the architecture of PD themselves. It would be interesting to determine, for example, whether and how endoplasmic reticulum (ER)–plasma membrane contact sites, ER-derived desmotubules, and their associated actin proteins, all found within the PD channel (Nicolas et al. 2018), are regulated by HopO1-1. But what is clear is that just as pathogenic bacteria are opening the doors between plant cells, this study by Aung et al. (2020) is likewise opening its own doors to a whole new field of research into bacterial effector-mediated plasmodesmatal modulation.

Collinear Chromosomes and Shifting Centromeres in the Arabideae 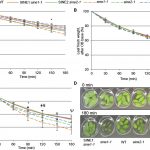 The Nuclear Envelope and Stomatal Dynamics
Scroll to top