Saffron spice is prized for its aroma, flavor, and color. The latter derives from highly concentrated apocarotenoid glycosides called crocins.  Accumulation of specialized metabolites like crocins often requires their sequestration in the vacuole to prevent cellular toxicity, feedback inhibition of biosynthetic enzymes, and further modification by cytoplasmic enzymes.  Crocins can account for as much as 10% of the dry weight within stigmas of Crocus sativus, a feat that relies upon transporters embedded within the tonoplast membrane to facilitate selective uptake into the vacuole.  However, plant genomes encode hundreds of transporters, complicating the identification of these vacuolar transporters.  In this issue, Demurtas et al. (2019) implement a transportomics pipeline to successfully characterize crocin transporters.

Several characteristics were used to narrow the list of potential crocin transporters.  Preference was given to ABCC- and MATE-type transporters, which have a propensity to localize to the tonoplast.  Furthermore, candidates were required to have high transcriptional expression in the stigma and share co-expression networks with crocin metabolites or the first dedicated crocin biosynthetic enzyme, CCD2.  ABCC2, ABCC4a, and MATE4 met all these criteria.

Transportomics is a sensitive, high-throughput methodology capable of simultaneously tracking multiple metabolites in complex mixtures at femtomolar concentrations (Krumpochova et al., 2012).  To identify active crocin transporters and assess their specificity, microsomes (i.e., membrane fragments) isolated from yeast expressing the candidate transporters were incubated in saffron stigma hydroalcoholic extracts (Figure).  Metabolomics was then used to identify which metabolites from the extract were imported into the microsome, to determine substrate specificity.  These assays demonstrated that MATE4 is a flavonoid transporter, whereas ABCC2 and ABCC4a are bona fide ATP-dependent crocin transporters with varying stereoisomer preferences.  ABCC4a transported both cis– and trans- crocin 3 in complex saffron stigma extracts but was able to transport only the cis version when individually purified metabolites were assayed.  This unusual result suggests that a cooperativity mechanism is necessary for uptake of the trans form.  Stereoselectivity might serve as an “isomerization trapping” mechanism (Matern et al., 1983) where acidic conditions within the vacuole favor the formation of the immobile trans form, thereby encouraging its accumulation by preventing crocin escape from the vacuole.

Notably, expression of ABCC4a together with CCD2 in Nicotiana benthamiana leaves stimulated higher crocin production than CCD2 expression alone – evidence that vacuolar crocin transporters can enhance net crocin accumulation.  Importantly, the ability to produce appreciable quantities of crocins in heterologous systems could mean higher supply and lower prices for saffron in the future.  Collectively, this pioneering work lays a foundation for how transportomics can be harnessed to discover transporters of other important plant natural products. 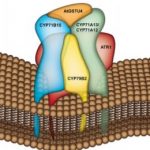 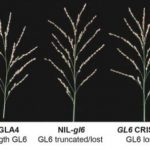