Episode Description: In this episode, we get down to business with two plants that could be a sweet dream or a beautiful (or terrifying) nightmare. Featuring DC Comic’s Black Mercy and Datura.

-Intro music “Age of Technology” by DP Music fades in-

Welcome back to Stories Plantarum, the podcast all about fabulous fantastical plants from sci-fi and fantasy and real-life plants that seem out of this world. I’m your host Rebecca Hayes, and today we’re discussing two mind-boggling plants that meld dreams with reality. A quick note before we begin, starting with this episode I will be posting transcripts of each episode for anyone who wants or needs those along with photos and any bonus content on community.plantae.org. I’ll post an update with links as soon as all of the transcripts for the first four episodes are up, which should be around later this week. Moving forward, I’m gonna shoot for at least 2 episodes a month. Alright as always thanks for listening and now let’s dig in to Stories Plantarum, Episode 4: Deadly Dreams.

-“Play the Game” by Monplasir fades up then into background-

For this story, we travel deep into Space Sector 2811 to a planet that is home to Matris Ater Clementia, also known as Mother Mercy, a benevolent sentient planet that serves as a steward to the rest of the organisms that reside on her. She is an extreme empath and after experiencing the immense pain of a crashed alien as he died, creates an army of space-travelling offspring known as Black Mercy to help ease the pain of the sick and dying throughout the universe

Black Mercy is able to tap into a host’s central nervous system to manipulate the hosts’ psyche and use their memories to create an idyllic fantasy of their greatest dreams. The host forgets all real-world pain in their dream world and is physically paralyzed, while the Black Mercy feeds off of the psychic energy produced by the host hallucination. Black Mercy is also telepathic and can alter host memories.

The Black Mercy’s body is made up of seven dark purple to black colored spherical lobes arranged in a circle with toothy, needle-like mouthparts that tap into the host nervous system in the center lobe. In some depictions, all seven lobes have the terrifying mouthparts. They also have purple spiked tentacles that they use to latch onto hosts.

Despite the good intentions of Mother Mercy, the Black Mercy’s mind-altering abilities fell into the hands of the supervillain and world-conqueror Mongol who weaponized them to use against anyone who dared try to stop him. He even manipulated some of the Black Mercy to produce Earth-shattering nightmares instead of sweet dreams out of the host’s worst fears that the host must live out until the Black Mercy is either removed or the host is killed

Luckily removing the Black Mercy isn’t too difficult, as its psychic grip weakens as the host begins to notice the plant’s manipulation.

Inevitably, most hosts start to suspect something is fishy when suddenly their lives are going unusually well or certain memories are slightly incorrect. When they reach this point, they are able to fight off the Black Mercy’s dream world and physically remove it from their body.

Alternatively, the plant can just fall off like a tick does after it gets enough blood to eat, except instead of a tick it is an equally terrifying plant and instead of blood it is psychic dream energy.

Many notable figures have been attacked by the Black Mercy including Superman, Batman, and Batgirl

Superman’s hallucination took place on Krypton his home-planet in an alternate reality where the planet never exploded. He is happily married with children.

Can you guess what happened in Batgirl’s dreamworld?

She graduates college while maintaining her role as a successful and active superhero, joins the Teen Titans, then the Blue Lantern Corps, then has a son, then is promoted to take the title Nightwing which is a huge family honor while an intern takes over her role as Batgirl.

You go Batgirl, break those stereotypes and chase those goals my friend.

-“Action” by Monplasir fades in and up-

This next plant is more prone to provoke Hellish nightmares than idyllic fantasies, and much more likely to kill you.

Described as a cosmopolitan weed, plants from the genus Datura spread their poisonous seeds worldwide in temperate areas. Not only are the seeds poisonous, but every single other part of the plant is also poisonous, with the seeds containing the highest concentration of toxins.

Effects of ingesting any parts of this plant can include delirium, frenzy, powerful hallucinations, coma, and death. Datura is both revered and feared around the world for its mind-altering properties.

Its been messing with people’s minds since the Roman times and continues to do so today. There are a few high-profile historical accounts of Datura poisoning.

In 38AD, an entire Roman army was brought to its knees from Datura. Stories of the incident describe men meticulously searching through fields as if hunting for some unseen treasure beneath the stones in slow motion, and some historians think that this incident may have inspired the phrase “leave no stone unturned”.

Getting back to the common name “Jimsonweed”, short for Jamestown weed, in 1676 British colonizers in Jamestown were starving and unfamiliar with the native plants, and unfortunately for them, included datura in their foraged salad. Years later Robert Beverly recounted the incident in The History and Present State of Virginia.

I’m gonna read a passage straight from it because trust me, it is too good to try and paraphrase.

“The soldiers presented a very pleasant comedy, for they turned natural fools upon it for several days: one would blow up a feather in the air; another would dart straws at it with much fury; and another, stark naked, was sitting up in a corner like a monkey, grinning and making [faces] at them; a fourth would fondly kiss and paw his companions, and sneer in their faces with a countenance more antic than any in a Dutch droll. In this frantic condition they were confined, lest they should, in their folly, destroy themselves – though it was observed that all their actions were full of innocence and good nature. Indeed, they were not very cleanly; for they would have wallowed in their own excrements, if they had not been prevented. A thousand such simple tricks they played, and after 11 days returned themselves again, not remembering anything that had passed.”

Datura is also referenced in multiple Shakespearean plays as well as in Homer’s Odyssey.

Datura was used historically for medicinal and ritualistic purposes: Aztecs used it as a painkiller in initiation ceremonies and a narcotic for ritual sacrifices.

A species of Datura is one of the stupefying ingredients in the ritual zombification process by Vodun sorcerers, today a common name of it is Zombi Cucumber by locals in Haiti where Vodun is the majority religion. It is also important in the Chumash creation myth.

Today, chemicals derived from Datura are used in various medical applications including treating nerve agent poisoning, heart attacks, GI disorders, and motion sickness, as well as inducing pupil dilations in eye surgery and as a pre-anesthetic.

Datura poisoning is rare in animals as the offensive smell and bitter taste deters them, but the weedy nature of the plant results in the seeds contaminating livestock feed and killing entire herds. Interestingly, some insects are actually attracted to Datura’s narcotic nectar and can become addicted to it.

Poisoning in people is much more common than in animals. Adults often mistake Datura growing as a weed in their garden for an edible herb, while the large, showy, white, trumpet-shaped flowers appeal to young children who don’t know better. Poisoning also happens in the teen and early 20s demographic due to intentional ingestion to mediate the hallucinogenic effects.

Apparently, around 1/3 of users can expect to experience only hallucinogenic effects, while another 1/3 also experience violent rage requiring physical restraint to prevent injury to bystanders, and another 1/3 of users will become unconscious and require emergency medical care.

Common hallucinations are blood dripping from the walls and other objects, seeing deceased family members as if they were alive again, smoking a non-existent cigarette even in folks who have never smoked before, insects crawling on your body, the phenomenon called “room jumping” where the user blinks and suddenly is in a completely different room with different people, and doppelgangers that can be helpful or hostile.

Physiological symptoms have been described as “Red as a beet, dry as a bone, blind as a bat, and mad as a hatter”. Flushed skin, extreme incessant thirst, blurred vision, and psychosis are all common.

One more fun fact for you is that Datura was repeatedly a source of inspiration for the famed United States painter Georgia O’Keeffe. She had several paintings featuring Datura, including the painting “Jimson Weed” described by the Indianapolis museum of art as her most ambitious floral still life which was originally commissioned by Elizabeth Arden for her home gym to inspire her to twist and unfurl her body in stretches like the trumpet flowers of the Datura. This painting was auctioned off in 2014 and broke the record for the most expensive painting ever sold by a female artist at $44,405,000, a title it still holds as of the end of last year.

Alright, that’s all I have for this episode of Stories Plantarum. If you enjoyed the show, please rate, comment, and subscribe on iTunes, it helps other people find the show. Follow us on twitter @PlantarumPod and facebook.com/PlantarumPod, feel free to reach out with any feedback or suggestions for future episodes. You can also find infographics about each episode there.  Like I said, I’ll be posting transcripts for each episode at community.plantae.org, and I’ll let you guys know as soon as those are up. I’ll be back next episode with more tales from the weird and wacky world of plants.

Stories Plantarum is written and produced by me, Rebecca Hayes. Intro music is “Age of Technology” by DP Music, and outro music is “Business Talk” by DP Music. Also featured are “Play the Game” and “Action” by Monplasir on the Free Music Archive. The Black Mercy plant comes from the DC Comics Universe. Sources for the Black Mercy include several DC Comics wiki pages including Black Mercy, Black Mercy Villain, Mother Mercy, and Black Mercies. Sources for the Datura background info included a US Forest Service article titled “The Powerful Solanaceae: Datura”, The American Association for Clinical Chemistry’s drug profile on Jimsonweed, the Cornell Department of Animal Science “Plants Poisonous to Livestock” database profile on Datura, a 2007 ScienceBlogs.com article by user neurophilosophy titled “The ethnobiology of voodoo zombification”, and several user experience stories from people who ingested Datura on erowid.org. 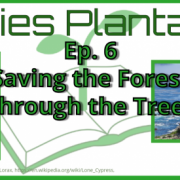 Stories Plantarum E6: Saving the Forest Through the Trees Transcript 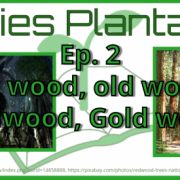 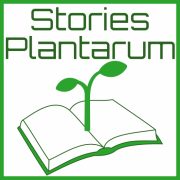 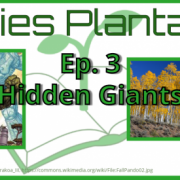 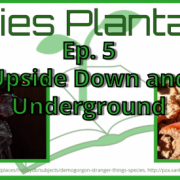 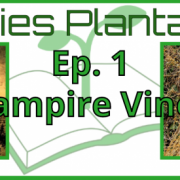 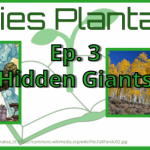 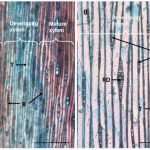