Exocytosis is a form of an active transport in which vesicles fuse with the plasma membrane. This vesicle transport secretes soluble cargo proteins and polysaccharides into the apoplast, but also delivers membrane lipids and transmembrane proteins to the plasma membrane. Vesicle trafficking is initiated in the Golgi complex, where the cargoes are sorted and packed through Sar/Arf GTPases (Yorimitsu et al., 2014) into the transport vesicles for their final delivery. Vesicle tethering to the target membrane is accomplished by RAB GTPases (Rehman and Di Sansebastiano, 2014), while membrane fusion is mediated by SNARE complexes (soluble N-ethylmaleimide-sensitive factor attachment protein receptors) (Kim and Brandizzi, 2012). Based on the core amino acid sequence in the hydrophobic repeats of the SNARE motif, SNARE proteins can be divided into four groups: Qa- (syntaxin 1 like), Qb- (N-terminal half of SNAP25 like), Qc (C-terminal half of SNAP25 like), which are located on the target membranes; and R-SNAREs, which decorate the transport vesicle (Bock et al., 2001). The Arabidopsis thaliana genome contains 65 SNAREs (Kim and Brandizzi, 2012), twice as many as any typical mammalian or unicellular system (Sanderfoot, 2007). This apparent abundance of SNARE proteins coincides with increased multicellularity and the terrestrial lifestyle of plants, presumably facilitating mechanisms of endomembrane trafficking in secretory and vacuolar transport (Sanderfoot, 2007).

The most widely expressed plasma membrane Qa SNAREs, SYP121 and SYP122, are thought to be responsible for the majority of the conventional secretory activity (Sanderfoot, 2007). Their overlapping expression domains and sequence similarity, along with the lack of a clear mutant phenotype in the single mutants under non-stress conditions (Karnik et al., 2015), suggest that SYP121 and SYP122 act redundantly. Yet, they do exhibit distinct functions, as SYP121 promotes fusion of vesicles carrying the potassium channel KAT1 (Eisenach et al., 2012), while SYP122 is attributed early cell wall deposition and bacterial pathogen-related defense (Assaad et al., 2004).

To explore the possible redundant function of SYP121 and SYP122, Waghmare (et al. 2018) compared the secreted proteome from wild-type plants to the proteomes of two single mutants, syp121 and syp122. Plants were grown in liquid culture, the secreted proteome was isolated from the growth medium, and specific proteins were identified using mass spectrometry. Proteins with signal peptides and without the ER retention signal or membrane anchor were considered to be conventionally secreted proteins. In total, 177 secreted proteins were identified, and mutant lines showed reduced protein secretion compared to the wild type. Based on this analysis, the authors concluded that, among the 177 total secreted proteins, 20 and 21 were delivered specifically via SYP121 and SYP122 vesicles, respectively. Interestingly, the specific cargo proteins of SYP121 and SYP122 belonged to overlapping large protein families involved in cell wall modifications, oxidative stress, lipid metabolism and protein degradation. 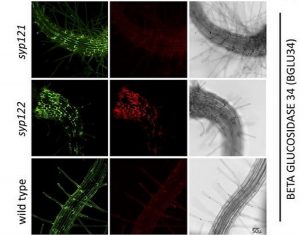 This overlap in cargo protein functions could explain the redundancy of the single mutant phenotypes. Yet, the devil is in the details. The identity of the majority of the specific cargo proteins (13 out of 20, and 16 out of 21 for SYP121 and SYP122 respectively) was determined based on sequence similarity, and is therefore not definitive. Further functional characterization of those cargo proteins will contribute to our understanding of the functional differences in the secretion dependent on SYP121 and SYP122. The approach presented by Waghmare (et al., 2018) exemplifies that it is possible to differentiate between seemingly redundant genes by assessing the single mutants for the phenotype, in this case the secreted proteome, that is most related to the gene function.

Sanderfoot A (2007) Increases in the Number of SNARE Genes Parallels the Rise of Multicellularity among the Green Plants. Plant Physiology 144: 6–17