By Amna Mhamdi and Scott Hayes

They say you can get too much of a good thing, and for plants that is certainly true. Light is essential for growth, but excessive light causes an overloading of the plant’s photosynthetic machinery. This excess energy can spill out and, through formation of reactive oxygen species (ROS), damage the cell. To protect against this, plant tissues that have previously experienced high light levels undergo a process of acclimation that involves changes to gene and metabolite profiles (Suzuki et al., 2012; Foyer et al., 2017). These are particularly important because they can take place in a matter of minutes, quickly protecting against the effects of future light damage.

Acclimation responses are often studied in the tissue that perceives the original stress, but there is growing interest in how light stress experienced by one tissue can affect acclimation in distant tissues. This process is known as systemic acquired acclimation (SAA). In this issue of Plant Physiology, Choudhury et al. (2018) study SAA in Arabidopsis thaliana by subjecting one rosette leaf to extremely high light intensities and then recording changes in the metabolome across time in distant parts of the plant. The authors identify a set of metabolites that are mainly increased in a particular tissue or that have similar responses in more than one specific tissue. Remarkably, changes in the metabolome occur within a very short time, 1–2 minutes in tissues that are at least 12 cm from the site of high light exposure (Figure 1). The authors show that RBOHD is required for the rapid accumulation of at least some of these metabolites (Figure 1). Since RBOHD generates ROS in the apoplast, the authors propose that a ROS wave facilitates the propagation of systemic acclimation to high light. This is in agreement with previous reports showing that a ROS wave is required for leaf-to-leaf communication and stomatal closure (Devireddy et al., 2018). The authors then further investigate the origins of this ROS wave and its interaction with cytosolic ROS-related systems. Through interrogation of their metabolomic data, they identify a rapid systemic decrease in citric acid along with a rapid increase in 2-oxo-glutaric acid. This is relevant as the conversion of citric acid to 2-oxo-glutaric acid is coupled to the production of NADPH, the ultimate substrate for ROS production (at least by RBOHs). The authors show that mutants for the cytosolic NADP‐dependent isocitrate dehydrogenase (cICDH), one of the sources for NADPH, are partially deficient in the acclimation of systemic leaves. 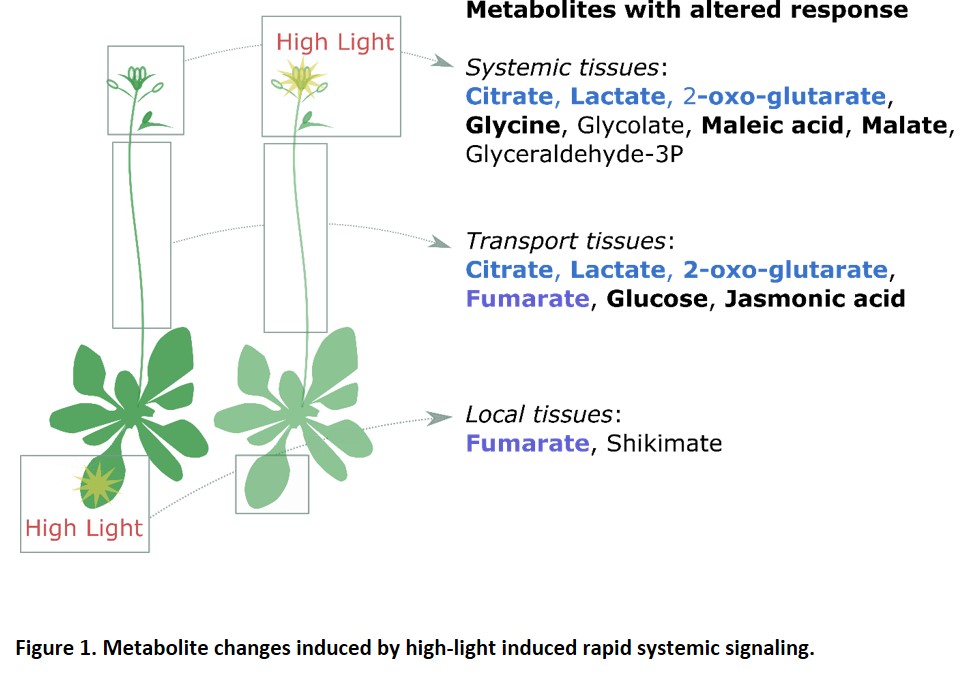 This study raises several important questions. First, are the metabolic changes observed in the different tissues specific to and necessary for systemic high light-induced responses? ROS waves as well as an increase in sugars and TCA cycle intermediates have been reported to occur in response to different stimuli, including oxidative stress, cold, and pathogens (Chaouch et al., 2012 Angelcheva et al., 2014; Noctor et al., 2015). The study by Choudhury et al. (2018) reveals exciting and previously undescribed rapid changes in primary metabolism. It will be challenging to identify how exactly ROS production leads to such a dramatic shift in metabolite profile in such a short time. Assuming that the rapid metabolite shifts are unlikely to be caused by changes in transfer from the stressed cells or de novo enzyme synthesis, how do they occur? What are their relationships with the well-described changes in transcriptomes? Are remotely triggered changes in post-translational enzyme activation somehow involved?

A major challenge facing the fields of SAA is the identification of the bona fide rapidly transmissible signal. In addition to ROS waves, local stresses cause rapid electrical, calcium, and ‘hydraulic’ waves throughout plants. It is currently unclear which of these (or combination of these) is the true driver of the signal. It would be interesting to combine the current analysis by Choudhury et al. with an integrative overview of signals and associated factors that are known to occur rapidly in response to a certain stress and that might undergo crosstalk with the ROS wave, including energy metabolites, calcium, glutathione, and active phytohormone signals. Recent developments in fluorescent reporters and live-imaging techniques may help us piece together just how local stresses are connected to global changes in plant development and metabolism.

Chaouch S, Queval G, Noctor G (2012). AtRbohF is a crucial modulator of defence-associated metabolism and a key actor in the interplay between intracellular oxidative stress and pathogenesis responses in Arabidopsis. Plant J. 69: 613-627