Koga et al. identified a mechanism that produces heterophylly in aquatic plants grown either submerged in water or in air.  Plant Cell.  https://doi.org/10.1093/plcell/koab192

Background: Amphibious plants, which can grow both on land and in water, often exhibit heterophylly, which results in extensive changes in leaf morphologies depending on the surrounding environment. Callitriche palustris (water-starwort) is an amphibious plant that exhibits drastic heterophylly. It makes ovate-shaped leaves on land and ribbon-like elongated leaves under water. Although the extensive heterophylly of C. palustris has been recognized for many years, the molecular mechanism remained to be investigated.

Question: How does C. palustris create different patterns leaf morphogenesis when it grows on land vs. water?

Findings: We found that drastic changes in leaf morphology are attributed to the changes in cellular forms accompanied by a modification of cortical microtubule orientation. The plant hormones ethylene and gibberellin positively regulate submerged-type leaf formation, whereas abscisic acid negatively regulates it. However, the application of exogenous ethylene and gibberellin could not sufficiently induce submerged-type phenotypes, suggesting that further factors are involved in the heterophylly in this species. Our studies also revealed changes gene in expression by means of transcriptome analyses. By comparing data from several growth conditions, we identified a subset of important genes that are likely to regulate its differential leaf development. Compared with previously investigated amphibious plants, we found that C. palustris has specific regulatory mechanisms of heterophylly, representing the independent evolution of amphibious lifestyles.

Next steps: The genes that we found are important in creating the heterophylly of C. palustris have not been elucidated functionally. We will further investigate how these genes function in regulating differential leaf development and how they are controlled by different plant hormones. For a comprehensive understanding of heterophylly in this species, it will be critical to explore additional factors required for promoting submerged leaf formation. In addition, to study the evolution of heterophylly, we will address how such a plastic trait evolved from a nonheterophyllous ancestor using Callitriche species. 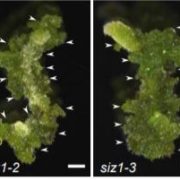 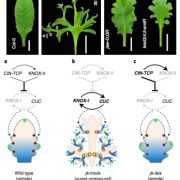 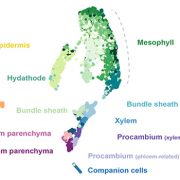 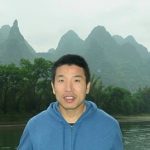 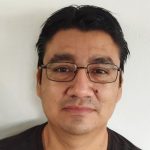