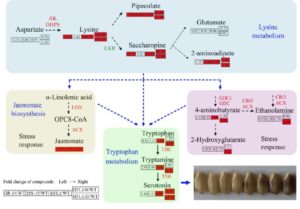 The nutritional quality of cereals often suffers from a deficiency in essential amino acids, especially lysine. Recently, High Free Lysine (HFL) rice (Oryza sativa) has been genetically engineered. The free lysine content in the mature endosperm of two HFL transgenic lines (HFL1 and HFL2) is increased by 25-fold compared to the wild type. The lysine-biofortified rice significantly contributed to improved growth performance, food efficiency, and lysine availability in growing rats. However, the mature endosperm of these HFL rice lines had a peculiar dark-brown appearance. Yang et al. (10.1104/pp.17.01283)  have used an integrated metabolomic and transcriptomic approach to elucidate the key metabolites responsible for the dark-brown phenotype. They report that serotonin biosynthesis is dramatically elevated and closely linked with dark-brown endosperm color in HFL rice. A functional connection between serotonin and endosperm color was confirmed via overexpression of TDC3, a key enzyme of serotonin biosynthesis. Both the jasmonate signaling pathway and TDC expression are strongly induced in the late stage of endosperm development of HFL rice, coinciding with serotonin accumulation and dark-brown pigmentation. The authors propose a model for the metabolic connection between lysine and serotonin metabolism in which elevated 2-aminoadipate from lysine catabolism may plays a key role in the connection between the jasmonate signaling pathway, serotonin accumulation, and the brown phenotype in rice endosperm. The high accumulation of free lysine in HFL rice endosperm induces many plant stress responses, especially the jasmonate (JA) signaling pathway, which results in the enhancement of serotonin biosynthesis and ultimately leads to the observed dark-brown endosperm phenotype. 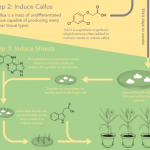