Transcriptomic studies in plants usually involve anonymous survey-style methods, where whole organs or tissues are homogenized, and each cell’s contribution to transcript abundance becomes unidentifiable. This type of approach, although useful for addressing many biological questions at the organ or tissue level, is inherently limited in dissecting processes that take place in rare cell types or individual cells. Methods to profile transcripts from plant cell types were developed soon after microarrays were first used, however, they are still based on laborious and challenging techniques, including laser microdissection of morphologically distinct cell types, and tissue protoplasting followed by fluorescence-activated cell sorting of GFP-tagged cell types (Nakazono et al., 2003; Brady et al., 2007; Celedon et al., 2017). Developing single-cell RNA sequencing (scRNAseq) in plants has been markedly more challenging than in animals, due to the cell wall polymer surrounding each plant cell and the large variation in cell size. 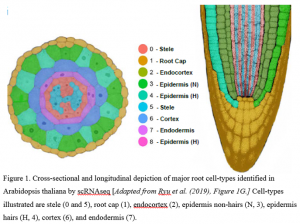 Next-generation sequencing has transformed many fields of plant biology, and recent advances in cDNA library preparation, barcoding, and protocols to isolate individual cells have made scRNAseq more feasible and less costly. In this issue of Plant Physiology, Ryu et al. (2019) describe the application of a commercially available microfluidic approach (10xGenomics) to barcode the RNA from individual cells in Arabidopsis thaliana roots and obtain >7,000 single-cell transcriptomes. Taking advantage of an Arabidopsis catalog of root cell type-specific markers, Ryu and colleagues disentangled eight major root cell type clusters (Fig. 1) and several sub-clusters, including two quiescent center cells, the rarest cell type in roots. The authors also noticed that expression levels of cell type markers varied within each cluster, with lower expression in the center and higher expression towards the edge of the cluster. This pattern suggested that cells in a cluster are organized by developmental gradients and may, in future, allow the reconstruction of plant developmental trajectories, as has been done in other organisms (Shin et al., 2015).

Furthermore, Ryu and co-workers showed that scRNAseq can also provide novel insight into the effect of gene mutations in cell development. As proof of concept, the authors performed scRNAseq of Arabidopsis plants with either a mutated rhd6 gene, which are unable to form root hairs, or a mutated gl2 gene, which lack non-hair cells (Masucci & Schiefelbein, 1994; Masucci et al., 1996). Analysis of root cell-type markers in these two mutant lines showed that rhd6 roots, as expected, had a significantly reduced number of hair cells and an increased number of non-hair cells, while gl2 roots showed the opposite pattern. This suggested that cells were converted from hair to non-hair and vice versa. A closer look at the transcriptomes of hair and non-hair cell clusters revealed that despite the mutated rhd6 and gl2 genes, “converted” cells showed some expression of their original cell-type markers. This implies that rhd6 and gl2 mutations do not entirely convert one cell type to the other and that other genes may contribute to defining hair and non-hair cells in Arabidopsis roots.

Transcriptome studies in model and non-model plants will greatly benefit from the increased resolution of scRNAseq. The ability to interrogate the transcriptomes of individual cells will allow a better understanding of many fundamental plant processes, including organ formation in meristems, the formation and function of the Casparian band in root endoderm cells, and the production of specialized metabolites, all of which take place in specific cell types and at specific developmental stages. Future improvements in protoplast isolation would allow the application of scRNAseq in more mature and recalcitrant plant tissues including wood, bark and seed tissues.  Furthermore, increasing per-cell sequencing-depth in scRNAseq experiments may allow de novo transcriptome assemblies for each cell type, greatly facilitating gene discovery and characterization in plant species that lack sequenced genomes, but have ecological, agricultural, or industrial value. 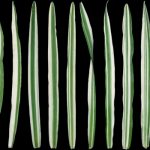 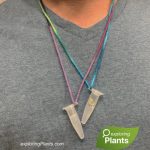