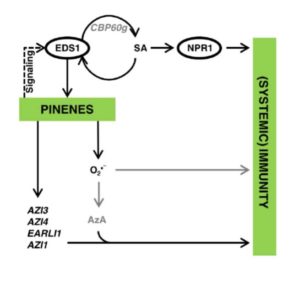 Based on these findings, the authors hypothesized that a-pinene and b-pinene induce SAR. To test this possibility, they exposed wild-type plants to a mixture of a-pinene and b-pinene or to the VOC solvent control for 3 days and then challenged the plants with the pathogenic bacterium Pseudomonas syringae pv tomato strain DC3000 (Pst). They found that bacterial growth was ~10-fold less in the leaves of plants that had been exposed to the monoterpenes, and that the effect depended on pinene concentration. Bacterial growth was not limited in the non-expressor of PR genes1-1 (npr1-1) mutant, which has defects in signaling downstream of SA, or in the sa induction deficient2-1 (sid2-1) mutant, which has defects in SA biosynthesis, after 3 days of monoterpene exposure. Furthermore, ROS O2•¯ accumulated in the leaves of plants treated with pinenes, but not in those of control plants. Microarray analysis showed that pinene treatment directly influenced key regulatory genes in SA biosynthesis and SAR (e.g., the gene encoding the lipid transfer protein AZELAIC ACID INDUCED1). Therefore, pinenes appear to induce SAR, in a manner that depends on SA signaling.

Thus, in addition to functioning in SAR signaling within the plant, a-pinene and b-pinene act as airborne signals that prime neighboring plants for impending danger. This exciting finding suggests that the aroma of a pine forest has an important function. 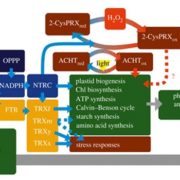 An Inside Scoop on Interviewing to be an Assistant Professor