Plants are photoautotrophs that grow via photosynthetic energy production. Under irradiation, chloroplasts in the plant’s green tissues convert light energy to chemical energy and assimilate atmospheric CO2 into sugars to support growth. Plants do not stop growing during the night, though—they accumulate a portion of the photosynthesis-derived sugars during the day and then consume them for night-time growth (Smith and Stitt, 2007). These sugars are stored as insoluble starch granules in many plant species, including Arabidopsis (Arabidopsis thaliana).

Studies using Arabidopsis starchless mutants, in which chloroplast starch-producing enzymes are deficient (Caspar et al., 1985; Lin et al., 1988), have demonstrated the importance of a continuous sugar supply throughout the entire day for plant growth. In starchless mutants, soluble sugars hyperaccumulate as the alternative to starch; however, they are quickly exhausted early in the night, thereby inducing sugar starvation later in the night (Gibon et al., 2004; Bläsing et al., 2005). This temporal sugar shortage interrupts nighttime growth and attenuates growth resumption the following dawn, resulting in a significant delay of growth (Smith and Stitt, 2007). Therefore, plants must control the pace of starch breakdown to avoid nocturnal sugar deficiency.

The circadian clock plays a role in controlling starch degradation. When Arabidopsis plants are suddenly exposed to an artificial, earlier dusk during growth under light/dark cycles, they avoid sugar shortage by slowing down the rate of starch breakdown during the night, indicating that plants anticipate the time until next dawn (Graf et al., 2010). The transcription factors CIRCADIAN CLOCK ASSOCIATED 1 (CCA1) and LATE ELONGATED HYPOCOTYL (LHY) constitute the circadian clock oscillator (Mizoguchi et al., 2002), and cca1 lhy double mutants exhaust their starch supplies, and therefore experience sugar starvation, before dawn in a 12-h light/12-h dark period (Graf et al., 2010). Those findings reveal that plants control the pace of starch degradation via circadian clock-mediated anticipation of dawn (Graf and Smith, 2011).

In nature, plants are exposed to fluctuating light conditions caused by the daily changes in weather, as well as shading from neighbors and wind-mediated changes in canopy structure. To avoid the nocturnal sugar starvation, plants must adjust the rate of starch breakdown to match the amount of starch acquired by diel photosynthesis, which changes day to day. In the current issue of Plant Physiology, Moraes et al. (2019) assess the role of the circadian clock in controlling starch turnover in response to the amount of diurnally assimilated starch. The authors established an experimental system that mimics the decrease in photosynthetic product due to environmental factors: Arabidopsis plants grown under 12 h-light at 160 µmol m-2 s-1 are subjected to one-day treatments with reduced light intensity (60, 30 or 5 µmol m-2 s-1) or reduced CO2 concentration, without an alteration in the light period.

Those treatments induced an elegant gradient of daytime increases and nighttime decreases in leaf starch contents (Figure 1). With the reduction of light intensity, the rate of starch accumulation during the day was reduced, and starch breakdown during the night also slowed down. The nocturnal decrease in starch content occurred in a linear manner under conditions of moderately low light (60 and 30 µmol m-2 s-1), thereby avoiding complete exhaustion of starch. The low CO2 concentration (40 ppm vs. 400 ppm in the control conditions) mimicked severe sugar starvation and helped the authors distinguish the effect of altered light signaling from the effects of reduced light intensity.

The authors integrated large datasets of diel changes in metabolites related to photosynthetic products and transcripts related to the circadian clock during the one-day treatments described above (Figure 1). Some circadian clock components showed consistent changes in transcript accumulation in response to the moderate reduction of starch levels due to lower light intensity; for instance, EARLY FLOWERING 4 (ELF4), a component of evening complex in Arabidopsis circadian clocks, was downregulated. Additionally, during the one-day treatment, reduced starch levels were accompanied by higher expression of REVEILLEs (RVEs) during the light period and of PHYTOCHROME INTERACTING FACTORs (PIFs) during the dark period. These changes might be an output of the slightly modulated ELF4 expression since the evening complex serves as a suppressor of PIF transcripts (Huang and Nusinow, 2016). However, the changes in clock-related transcripts in response to altered starch levels were small compared to the magnitude of the diel oscillation of clock components. In addition, the changes in PIF and RVE expression due to reduced starch availability were larger than those of the circadian clock components, leading the authors to clock-independent upregulation for PIFs and RVEs. Overall, the authors concluded that a circadian clock-independent system controls starch turnover in response to day-to-day changes in the amounts of photosynthetic products. This conclusion is consistent with the previously proposed model of arithmetic division (the AD model), in which the rate of starch breakdown is set by integrating the starch amount and the period to dawn as parallel inputs (Scialdone and Howard, 2015). 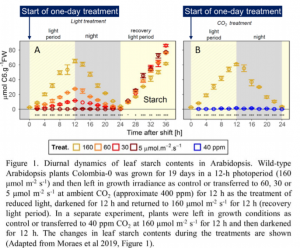 It is also not known how plants sense the amount of total photosynthetic products to determine the rate of nighttime starch breakdown. Can plants directly estimate the amount of insoluble starch? Are there any signal molecules? Intriguingly, trehalose-6 phosphate acts as a signal reflecting energy status (Figueroa and Lunn, 2016), and an increase in trehalose-6 phosphate suppresses the rate of starch degradation (Martins et al., 2013; dos Anjos et al., 2018). Such signaling molecules might play an important role in day-to-day regulation of starch turnover. How plants sense daily outputs of photosynthesis, and adjust sugar metabolism, is an important question that awaits further characterization.

Graf A, Schlereth A, Stitt M, Smith AM (2010) Circadian control of carbohydrate availability for growth in Arabidopsis plants at night. Proc Natl Acad Sci U S A 107: 9458-9463

Plants are thirsty, too! 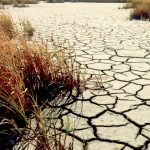 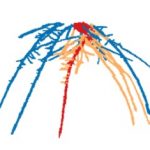