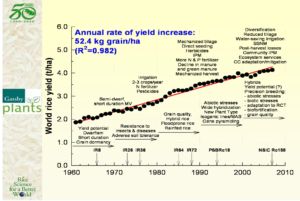 Abstract: Rice is the most important food crop of the developing world and the staple food of more than half of the world’s population, many of whom are also extremely vulnerable to high rice prices. In developing countries alone, more than 3.3 billion people depend on rice for more than 20% of their calories. One fifth of the world’s population, more than 1 billion people, depends on rice cultivation for livelihoods. Harvested from 158 million hectares annually, rice has twice the value of production in the developing world of any other food crop: more than $150 billion per year. Nearly 560 million people living on less than US$1.25 (purchasing power parity [PPP]) per day are in rice-producing areas, far more than for any other crop. Rice remains productive in flooded environments where most other crops would fail. Production systems are unique and the longevity of rice farming speaks for itself. Irrigated lowland rice, which makes up three-quarters of the world rice supply, is the only crop that can be grown continuously without the need for rotation and can produce up to three harvests a year—literally for centuries, on the same plot of land. To maintain future global rice supplies many challenges must be addressed. There will be less land, labour and water available as economies grow, urbanization continues and populations increase. The effect of climate change will only exacerbate the challenges. The research pipeline must be fortified to insure a steady supply of new technologies suitable for adoption by small holder rice farmers. Increased investments are required by both the public and private sectors in the following thematic areas:

Speaker Profile: Robert ”Bob” Zeigler is an internationally respected plant pathologist with more than 30 years of experience in agricultural research in the developing world. He is currently the director general and chief executive officer of the International Rice Research Institute (IRRI). IRRI has around 1,300 scientists and support staff. Its headquarters are in the Philippines, with offices in 15 countries and activities in more than 25 others. IRRI focuses on sustaining, understanding, and using the genetic diversity of rice to improve rice productivity and the livelihood of rice farmers and consumers. There is also a major research emphasis on improving sustainable production practices and understanding the social and political context in which improved rice production systems operate. Dr. Zeigler’s research career has focused on the genetics of host plant resistance, the interaction of plants and their pathogens and pathogen population biology. Most of his work has been with rice and its pathogens. Dr. Zeigler is an elected fellow of the American Association for the Advancement of Science and of the American Phytopathological Society and is a member of the honor societies Sigma Xi (The Scientific Research Society) and Gamma Sigma Delta (agriculture). He is the recipient of several other prestigious awards throughout his career. He earned degrees at Cornell University (Ph.D), Oregon State University, and the University of Illinois (High Honors). Dr. Zeigler has authored and co-authored well over 100 refereed international journal articles, reports, and scientific papers and has delivered numerous invited lectures worldwide. He is married and has three grown children. 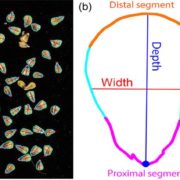 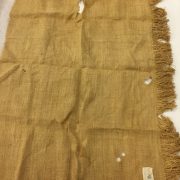 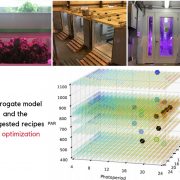 Ottoline Leyser. Thinking like a vegetable: How plants decide what to do