Sweet ripe strawberries (Fragaria spp.) come in colors ranging from deep burgundy to white and everything in between. Such variation attracts consumers and gardeners alike, making fruit color an important breeding target. Strawberry fruit receptacles vary in color due to different levels of anthocyanins. These water-soluble pigments are synthesized at the endoplasmic reticulum via the well-known flavonoid pathway and transported into the vacuole for storage. However, little is known about the network controlling this trait.

The expression of structural genes involved in anthocyanin biosynthesis is fine-tuned by transcription factors such as MYB, bHLH, and WD-repeat proteins. The R2R3 transcription factor MYB10 activates these genes during strawberry fruit development (Medina-Puche et al., 2014). An 8 bp insertion in the coding region of MYB10 was recently associated with the loss of anthocyanins in a white-fruited octoploid cultivated strawberry (F. × ananassa) variety (Wang et al., 2020). However, the subgenome harboring this insertion is unknown, and whether mutations in other MYB10 gene copies or even other genes affect fruit color is unclear. 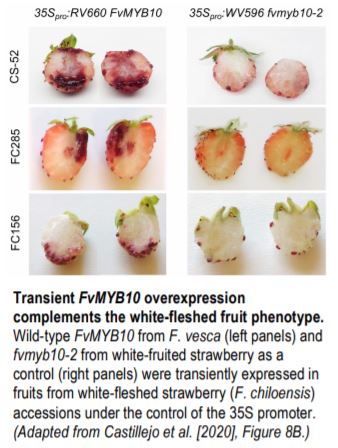 Cristina Castillejo and colleagues (2020) developed a large F2 mapping population from a cross between red-fruited and white-fruited diploid woodland strawberry (F. vesca) accessions and explored the reason behind this variation via mapping-by-sequencing. A gypsy-transposon detected in MYB10 truncates this protein and knocks out anthocyanin biosynthesis in white-fruited strawberry. This fvmyb10-2 allele co-segregated with the white phenotype at a 1:2:1 ratio, as expected for a single-gene codominant trait.

MYB10 target genes in the anthocyanin pathway were not expressed in accessions carrying fvmyb10-2. However, besides anthocyanins, few metabolites were affected in these lines. Therefore, like red fruits, white fruits with downregulated MYB10 expression are rich sources of nutritional compounds other than anthocyanins. Transient overexpression of FvMYB10, but not fvmyb10-2, restored anthocyanin biosynthesis in a white-fruited accession.

The authors looked for various fvmyb10 alleles in a large panel of white-fruited woodland strawberry accessions collected worldwide, from Hawaii to Chile to Europe. Three different FvMYB10 alleles and a deletion of this gene were uncovered, indicating that mutations in MYB10 occurred independently in diverse ecological niches to drive the natural variation in strawberry fruit color.

Despite this exciting discovery, applying it to cultivated strawberry improvement is challenging due to the octoploid nature of this crop and the frequent homoeologous exchanges that have occurred following polyploidization. To further probe the genetic control of color variation in cultivated strawberry, Castillejo et al. performed a genome-wide association study of F. × ananassa populations with a wide range of fruit colors and mapped single nucleotide polymorphisms strongly associated with white fruit skin. An analysis of quantitative trait loci most strongly associated with fruit color variation in an interspecific (F. × ananassa × F. chiloensis) population identified a locus harboring 171 annotated genes; again, MYB10 was the most likely causal gene. Genetic and transcriptomic analyses revealed that MYB10-2 is the dominant homoeolog regulating anthocyanin biosynthesis in developing fruit.

The MYB10-2 promoter showed considerable polymorphism among accessions. A CACTA-like transposon in this promoter was associated with ectopic MYB10-2 expression in fruit flesh and anthocyanin production in red-fleshed accessions, in contrast to white-fleshed accessions. Overexpressing MYB10-2 under the control of a constitutive promoter complemented the white-fleshed phenotypes of various accessions (see figure), making this gene ripe for use in CRISPR-Cas9-mediated gene editing and marker-assisted breeding. 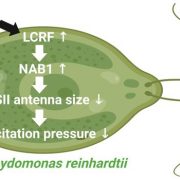 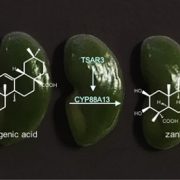 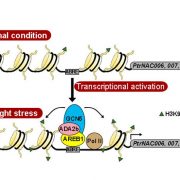 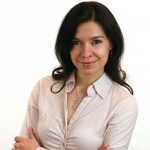 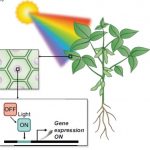