BRI1 (BRASSINOSTEROID INSENSITIVE1) is a plasma-membrane localized brassinosteroid (BR) receptor that is endocytosed to internal membranes following BR binding. In this study, Zhou, Liu et al. provide a mechanistic model of BRI1 endocytosis through ubiquitination. They identified two E3 ubiquitin ligases, PUB12 and PUB13, responsible for the ubiquitination of BRI1. Additionally, they showed through a co-immunoprecipitation study that BR induces the association of BRI1 with PUB13. In this case, BRI1 acts as both a substrate and activator of PUB13. BRI1 phosphorylates PUB13 at serine 344 between the U-box domain and the first ARM repeat. Along with these observations, pub12 pub13 mutant shows the impairment of BRI1 endocytosis. (Summary by Arif Ashraf) PNAS: 10.1073/pnas.1712251115 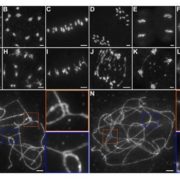 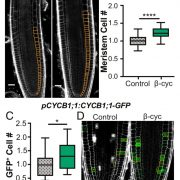 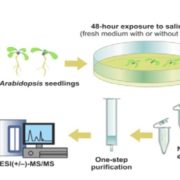 Membrane protein MHZ3 stabilizes OsEIN2 in rice by interacting with its Nramp-like...
Scroll to top