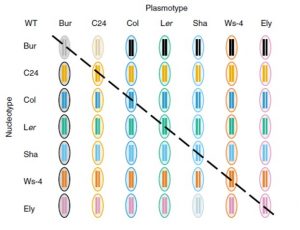 A cybrid is a cytoplasmic hybrid; in other words, a cell or organism in which the cytosolic genomes (mitochondria and plastid) have a different origin than the nuclear genome; the nuclear genome is inherited solely from the paternal parent, and the cytosolic genomes from the maternal parent. Starting with a chance observation and a fortuitous synergy (back story here), Flood et al. have investigated a set of reciprocal cybrids to evaluate the phenotypic contribution of the organellar genomes. They assayed a broad range of traits using several environmental conditions (and have deposited the lines in the stock center so you too can evaluate them). By comparing the two reciprocal cybrids with each parental line, it was possible identify phenotypic effects of the cytoplasmic or nuclear genomes, or their interactions. The authors included two accessions in their study that had known strong organellar-associated phenotypes, but even beyond those they identified some significant effects on parameters such as leaf growth. The potential application of these cybrids includes new opportunities to introduce traits such as herbicide tolerance and male sterility into elite breeding lines. (Summary by Mary Williams)  Nature Plants 10.1038/s41477-019-0575-9 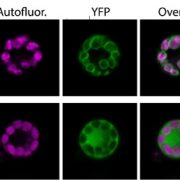 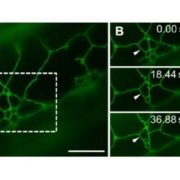 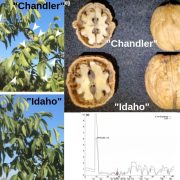 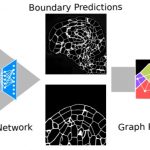 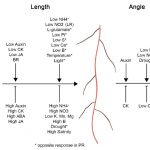