The prohibitin (PHB) protein family is highly conserved from prokaryotes to eukaryotes (Van Aken et al., 2010). Initially identified as a tumor suppressor in rat liver, PHBs in animals are localized in various cell compartments, including mitochondria, nuclei, and plasma membranes, and function as scaffold proteins in many signaling pathways, including those underlying cell proliferation, apoptosis, aging, mitochondrial biogenesis, and immune response. Thus, PHBs have often been targeted for drug discovery and clinical applications (Thuaud et al., 2013). Plants may have multiple PHBs due to genome duplication. Five PHB genes (PHB1, PHB2, PHB3, PHB4, and PHB6) are expressed in Arabidopsis, and have similar expression patterns in the mitochondria of shoot and root meristematic tissues (Van Aken et al., 2007). Loss of function of PHB3 results in mitochondrial swelling, ROS accumulation, inhibition of cell division in the meristem, and growth retardation, demonstrating that PHB functions in mitochondria and in cell division through mitochondrial-generated ROS signaling (Van Aken et al., 2007; Kong et al., 2018). 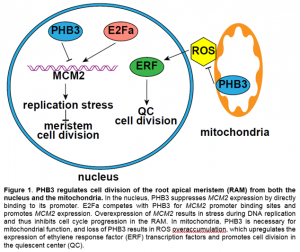 In this issue of Plant Physiology, Huang et al. (2019) report that PHB3 is also localized in the nucleus and regulates cell division and genome stability in the root apical meristem (RAM) via repressing the transcription of MINICHROMOSOME MAINTENANCE (MCM) 2. In animals, PHB3 physically interacts with MCM2-7 (Rizwani et al., 2009), which is a DNA helicase complex that binds to chromatin to separate double-stranded DNA during DNA replication, and is essential for cell cycle progression and genome stability at the replication fork (Riera et al., 2017). In Arabidopsis, loss of MCM2 function is embryonic lethal and overexpression of MCM2 inhibits plant growth (Ni et al., 2009). Huang et al. (2019) showed that the phb3 mutant has a smaller RAM and reduced meristematic activity relative to the wild type. Additionally, phb3 exhibits cell death at the root tip and is hypersensitive to the DNA damaging reagent methyl methanesulfonate. The latter phenotype is not due to ROS overaccumulation in the mutant, because hypersensitivity persists even when ROS levels are lowered in phb3 by treatment with reduced glutathione (Huang et al., 2019). Interestingly, MCMs are upregulated in phb3, and downregulation of MCM2 by RNAi partially rescues the cell division deficiency of the RAM and hypersensitivity to DNA damaging reagent in the phb3 mutant. Moreover, PHB3 directly binds to the promoter region of MCM2 at the E2F binding sites and acts antagonistically with E2Fa to inhibit MCM2 expression (Fig. 1). This demonstrates that plant and animal PHBs function through the same partner MCM, but with different modes of action (promoter binding vs. protein binding).

Although PHB3 directly represses the transcription of MCM2, PHB3 likely also has roles independent of MCM2 in regulating cell division in the RAM. In the phb3 mutant, the expression levels of both the quiescent center (QC) marker WOX5 and the QC regulator SCARECROW are reduced (Kong et al., 2018; Huang et al., 2019), while those in the MCM2 overexpression lines are not altered (Ni et al., 2009). Reduction of MCM2 transcripts to a wild-type level in the phb3 mutant failed to completely rescue the root growth defect, suggesting that other pathways are also involved in transducing the PHB3 signal. Kong et al. (2018) reported that PHB3 restricts ROS accumulation in mitochondria, which in turn limits the expression of ethylene response factor transcription factors, suppressing QC cell division and cell differentiation in the RAM (Fig. 1). It is unclear whether the increased cell division in the QC (Kong et al., 2018) and decreased cell division in the meristematic zone (Huang et al., 2019) in phb3 relative to the wild-type is due to different cell types in the RAM. Nonetheless, these results suggest that PHB3 functions in both the nucleus and mitochondria via different signaling pathways to control cell division and differentiation in the RAM. PHB3 is preferentially localized in the nucleus when the plant is treated with a mitochondrial stress reagent, rotenone (Huang et al., 2019). Studies on the shuttling of PHB3 between cell compartments under physiological conditions may further enhance our understanding of this important protein. 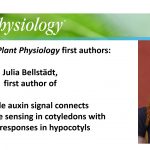 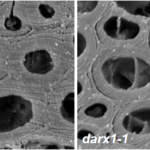