Plasmodesmata (PD) are membrane-bound tunnels that connect the cytosols of neighboring plant cells. The rate of PD transport between cells changes during the course of plant development. Forward genetic screens to identify factors controlling transport through PD have 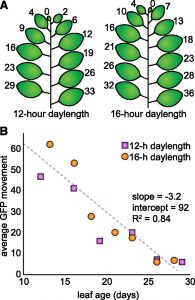 repeatedly revealed that chloroplasts influence PD transport. This has led to a paradigm shift, focusing less on the role of structural changes directly at PD (e.g., callose deposition) and more on how cellular physiology influences the function of PD. Although many groups have now demonstrated that chloroplast function and PD transport are tightly connected, the biological significance of this relationship between chloroplasts and PD remains unresolved. Given the connection between PD transport and chloroplast physiology, Brunkard and Zambryski (10.1104/pp.19.00460) have examined whether PD transport is  sensitive to light.  In the present study, they combine genetic and physiological approaches to show that PD transport is dynamically regulated by light and the circadian clock throughout the diurnal cycle. Light promotes PD transport during the day, but light is not sufficient to increase rates of PD transport at night, suggesting a circadian gating mechanism. Indeed, silencing the expression of the core circadian clock gene, LHY/CCA1, allows light to strongly promote PD transport during subjective night, confirming that the plant circadian clock controls the PD transport light response. The authors conclude that PD transport is dynamically regulated during the day/night cycle. Due to the many roles of PD in plant biology, this discovery has strong implications for plant development, physiology, and pathogenesis. 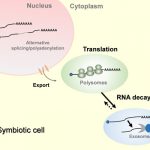