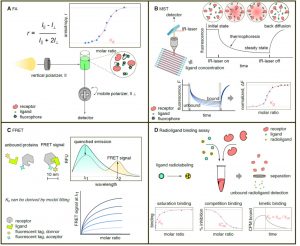 It seems every other paper shows a nice diagram of a signaling cascade that includes a receptor interacting with its ligand. However, sometimes these diagrams are little more than speculation or guesswork. It’s not always easy to figure out if this interaction is real. Here, Sandoval and Santiago review (and nicely illustrate) the approaches that can be used to identify ligand-receptor interactions in vitro, including best practices, limitations and caveats. The methods described include label-free assays such as: Isothermal titration calorimetry, Optical biosensing technologies, Fluorescence anisotropy (and more); labeled-ligand assays such as Microscale Thermophoresis (MST), Förster (Fluorescence) Resonance Energy Transfer (FRET), Radioligand binding assays, and Chemiluminescence-based receptor-ligand assay; and structure-based ligand binding assays such as  Nuclear Magnetic Resonance (NMR), Hydrogen Deuterium exchange Mass Spectrometry (HDX-MS), Wide-Angle X-ray Scattering (WAXS) and Small-Angle X-ray Scattering (SAXS). This is a great resource for those wishing to validate  interactions as well as those who need a quick guide to help them interpret others’ work. (Summary by Mary Williams) Plant Physiol.  10.1104/pp.19.01396 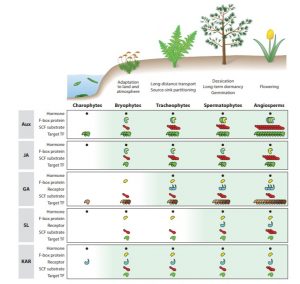 Spatio-temporal action of hormones is essential for proper growth and development of plants. In this review, Blázquez et al. discuss the evolution of the shared features of  signaling pathways of different plant hormones. Auxin, jasmonic acid, gibberellic acid, and strigolactone signaling pathways commonly include proteasome degradation of regulators by Skp1/Cullin/F-box (SCF)- type E3 ubiquitin ligase complexes. The degradation of the regulator allows the linked transcriptional factor to promote transcription of hormone-responsive genes, which is another shared strategy in the signaling cascade. The third common mechanism is the binding of the co-repressor TOPLESS (TPL). High throughput sequencing and large-scale data such as OneKp have provided detailed knowledge of the evolution of these signaling components beyond the model angiosperms. The authors discuss the known information about these regulators and their evolutionarily conserved roles and divergences. Understanding the relationship between the different components in hormone signaling will provide insight on signaling pathways as well as their roles in plant development. (Summary by Suresh Damodaran) Annu. Rev. Plant Biol. 10.1146/annurev-arplant-050718-100309 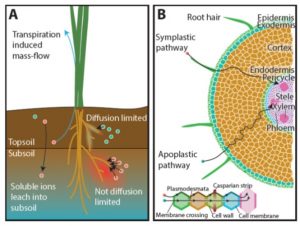 Roots anchor plants and take up water, but one of their most important and complex functions is to bring a large number of different essential nutrients into the plant. Root architecture affects and is affected by nutrient uptake, but ultimately uptake is largely controlled by membrane-bound ion transporters. Griffiths and York review physical, mathematical and experimental descriptions of ion uptake, including radioactive tracer studies, and depletion from a solution (as a function of initial concentration or time). About half of the studies surveyed used maize roots, followed by barley and rice. The authors observe that few studies compare different genotypes of a species, probably due to the challenging nature of available methods. Modeling and simulations can be effective ways to understand how the kinetics and abundance of individual transporters might affect plant growth, as can high-throughput hydroponic systems that could measure nutrient depletion rates in real time. Breeding for enhanced nutrient uptake could provide greater yields from nutrient-poor soils or decrease the use of high-cost, high-impact fertilizers. (Summary by Mary Williams) Plant Physiol. 10.1104/pp.19.01496 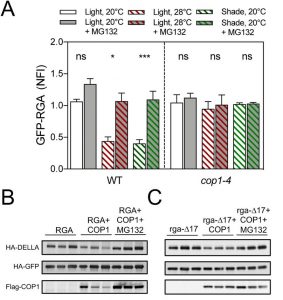 The canonical model of gibberellic acid (GA) signaling pathway includes the recognition of the hormone by the receptor GID1 and the further degradation of the DELLA proteins by the proteasome. In this paper, Blanco-Touriñan et al. observed in Arabidopsis that the DELLA protein REPRESSOR OF ga1-3 (RGA) reduction under warm and shade conditions is independent of GA/GID1 mediated degradation. They found that this environmental degradation of RGA is mediated by the E3 ubiquitin ligase CONSTITUTIVELY PHOTOMORPHOGENIC1 (COP1). Moreover, the DELLA proteins RGA and GAI1 can directly interact with COP1 and SPA1 and be ubiquitinated. They also analyze the physiological relevance of this interaction, showing that in cop1 mutants, the defect in hypocotyl growth is dependent on DELLAs and can be rescued by adding exogenous GA. This work connects the DELLA proteins with COP1/SPA1, central regulators of light and temperature responses. The GA/GID1 pathway emerged in vascular plants, while DELLA and COP1 genes are present in all land plant lineages. This alternative regulation of DELLA stability could represent an ancient mechanism that explains the role of these proteins in other plant lineages. (Summary by Facundo Romani) bioRxiv 10.1101/2020.01.09.897157 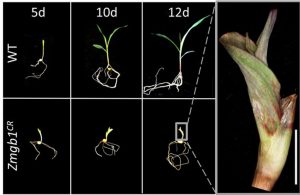 Heterotrimeric G proteins transduce signals between receptors and downstream factors. Previous genetic studies have shown diverse roles for these proteins based on loss-of-function phenotypes; for example mutations in Arabidopsis Gα and Gβ subunits both lead to enlarged shoot apical meristems. Wu et al. used CRISPR/Cas9 to knock out the maize gene encoding Gβ and found a seedling-lethal phenotype (similar to findings in rice). Interestingly, this isn’t a developmental defect, but is instead due to a hyperimmune response. When the knockout was introgressed into a line that suppresses this immunity, the plants survived and showed developmental defects in the shoot apical meristem leading to fasciation (formation of a flattened, strap-like meristem). The authors also identified another fasciated mutant, fea*183, with a single-amino acid change in the Gβ-encoding gene. The authors conclude, “Our study shows that ZmGB1 is a critical regulator in both meristem development and immunity; therefore, this gene has the potential to optimize defense–development trade-offs to improve agronomic production.” (Summary by Mary Williams) Proc. Natl. Acad. Sci. USA 10.1073/pnas.1917577116 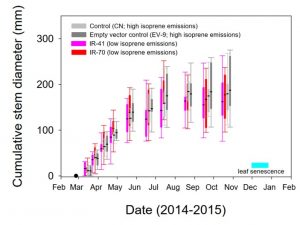 Many trees emit isoprene (C5H8, a small volatile carbon compound) during hot weather, and isoprenes have been shown to help trees tolerate short bursts of high temperatures (heat flecks). Isoprenes are not themselves harmful, but are reactive and can lead to the production of high levels of ground-level ozone, which is harmful to humans and other plants. Monson et al. used genetic engineering to block isoprene production in hybrid-poplar (a plantation tree used for biofuel and biomass). The authors grew unmodified trees, trees carrying an empty vector, and several independent RNAi insertions over several years in Oregon (mild) and Arizona (hot). Overall, they found no significant reduction in biomass in the isoprene-reduced trees as compared to the empty-vector engineered trees (the untransformed control showed some higher growth effects, particularly during the hottest month of the growing season). The authors observe that much of the biomass accumulations occurs before the hottest temperatures, and also that suppression of isoprene biosynthesis suppresses much of the phenylpropanoid pathway, which could shift metabolism towards lignin biosynthesis. This work demonstrates that decreasing isoprene emissions is not incompatible with high tree productivity. (Summary by Mary Williams) Proc. Natl. Acad. Sci. USA 10.1073/pnas.1912327117 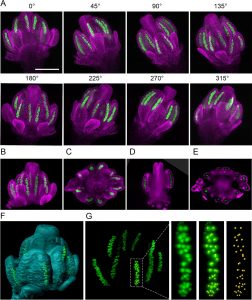 Advances in microscopy have greatly informed our understanding of fundamental plant processes, but the germline cells in flowers have been hard to image as they are tiny and embedded within other tissues. Valuchova et al. present a method using light sheet fluorescence microscopy that allows live cell imaging (for up to five days) of germline cells in Arabidopsis flowers. This allowed them to trace male meiosis within anthers, using a fluorescently-tagged histone H2A to image chromosomes, or they meiotic chromosome marker ASY1. Sepals were removed, and then flowers were embedded in low-melting point agarose in a capillary to hold them in place during imaging. Imaging female meiosis required further dissection to expose the ovules. This paper has some exciting time-lapse videos – see for example https://elifesciences.org/articles/52546#fig3video1 (Summary by Mary Williams) eLIFE  10.7554/eLife.52546 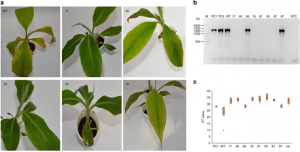 Banana streak virus (BSV) is a plant pathogenic pararetrovirus that has integrated into the genome of banana Musa spp., reducing crop production. When BSV-infected banana plants become stressed, BSV reactivates to create functional infectious viruses that can cause lethal tissue necrosis. Tripathi et al. used CRISPR/Cas9 to inactivate endogenous BSV, preventing plants from becoming symptomatic during drought which would otherwise cause them to become diseased. The three open-reading frames in BSV were targeted by CRISPR to produce frameshift mutations with low occurrence of off-target effects, and a knockout of all three was important to completely inactivate BSV. This study is the first to knock out integrated viral DNA from a host plant genome, demonstrating that CRISPR/Cas9 targeted mutagenesis can permanently inactivate endogenous viruses. Knocking out BSV in other banana cultivars would provide a wealth of previously unexplored germplasm for use in breeding and prevent further decimation of crops. (Summary by Katy Dunning) Commun. Biol. 10.1038/s42003-019-0288-7 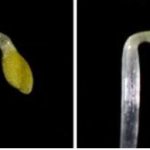 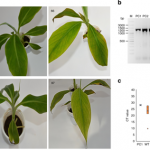