When seeds germinate underground, the emerging seedlings must push upward through the soil to reach sunlight and begin photoautotrophic growth.  As the hypocotyl emerges from the seed, mechanical pressure against the soil induces production of ethylene, which accumulates and promotes hypocotyl curling. This forms a structure known as the apical hook, which protects the young apical meristem from physical damage as the seedling emerges.

Huang et al. (2020) show that SA antagonizes and inhibits the apical hook-promoting effect of ethylene. Treatment with SA induced the accumulation of NPR1 monomers in the nucleus, blocking the transcriptional activity of EIN3 and EIL1 and the expression of AH-promoting genes. On MS medium, etiolated Arabidopsis seedlings formed a typical apical hook (see figure). Growth in the presence of ACC, an ethylene biosynthetic precursor, caused an exaggerated apical hook to form. By contrast, growth in the presence of SA  inhibited apical hook formation. This inhibition required functional NPR1, as shown both by the decreased inhibition in the npr1-1-mutant and by the exaggerated inhibition in a line overexpressing NPR1. 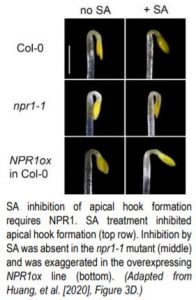 An EIN3 overexpressing line also had an exaggerated apical hook, and an ein3 eil1 double mutant did not form a typical apical hook, even in the presence of ACC, confirming the role of EIN3 in apical hook formation. Additional genetic studies showed that npr1-1 acts upstream of ein3 and eil1. The authors then showed that SA not only suppresses HLS1 expression by inhibiting EIN3 transcriptional activity but also suppresses the positive effect of ACC on HLS1 transcription.

Using split-luciferase complementation, pull-down, and yeast two-hybrid assays, the authors showed a direct interaction between NPR1 and the N-terminal DNA-binding region of EIN3, suggesting a mechanism by which NPR1 could block transcription of EIN3-induced genes. They also found that the NPR1-EIN3 interaction is enhanced by SA. Furthermore, transcriptomic studies showed how SA, NPR1, and EIN3 coordinately and differentially regulate subsets of genes involved in a wide variety of physiological and developmental processes, including the seed-to-seedling transition.

The authors present an excellent model summarizing how SA antagonizes ethylene-induced apical hook formation via NPR1 and EIN3.  As seedlings germinate, ethylene production causes nuclear accumulation of EIN3, which activates genes required for apical hook formation.  In the absence of SA, NPR1 is mostly oligomeric in the cytoplasm, but in the presence of SA, NPR1 oligomers dissociate and NPR1 monomers translocate to the nucleus and bind EIN3, blocking the induction of apical hook genes. 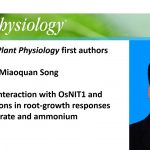 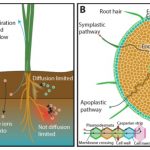