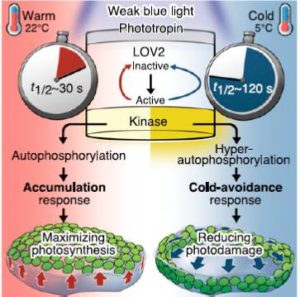 Fujii et al. studied the role that blue-light perceiving phototropins play in sensing temperature. They studied the temperature response in the liverwort Marchantia polymorpha, which has only one phototropin. At 5°C, blue-light perception by phototropins induces a cold-avoidance response in which chloroplasts move to the sides of the cells; by contrast at 22°C the chloroplasts spread out along the cell surface. This cold-avoidance response does not occur in a phototropin knockout suggesting the photoreceptor confers temperature sensing. The authors then undertook a series of experiments, including single cell analyses of temperature controlled blue light responses. They showed the half-life of the activated state of phototropin’s LOV2 domain is temperature dependent, which causes the temperature-sensitive chloroplast behavior. This study provides further evidence of light and temperature information being integrated in a single protein. (Summary by Ian Street) Proc. Natl. Acad. Sci. USA 10.1073/pnas.1704462114 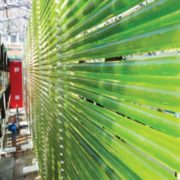 A multi-species synthesis of physiological mechanisms in drought-induced tree...
Scroll to top