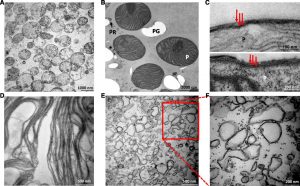 The plastids of Euglena gracilis, a freshwater photosynthetic flagellate, are embedded by three membranes. These membranes are an evolutionary vestige of the  secondary endosymbiotic event that occurred  between a phagotrophic eukaryovorous euglenid and a Pyramimonas-related green alga. The plastids of  Euglena are unusual in being surrounded by only three membranes: most secondary plastids are surrounded by four envelopes: the two innermost are derived from the inner and outer chloroplast envelopes of the primary plastid of the alga that was taken up during the symbiotic event, while the two outermost are derived from the plasma membrane of the engulfed alga (the third) and the phagosome of the host (the fourth).  It is commonly believed that the nucleus-encoded plastid proteins of E. gracilis pass through the middle and innermost plastid envelopes by machinery homologous to the translocons of the outer and inner chloroplast membranes, respectively. Recent transcriptomic and proteomic studies have identified a reduced form of the inner membrane translocon complex but failed to identify either outer membrane translocon homologs or any representative of porin family proteins specific to the outer membrane of primary plastids: these findings raise the question of the origin of E. gracilis’s middle plastid envelope: is it more akin to the outer chloroplast envelope or the plasma membrane of the engulfed alga? To shed light on this question, Tomečková et al. (10.1104/pp.20.00505) compared the lipid composition of whole cells of a pigmented E. gracilis strain and two bleached mutants that lack detectable plastid structures. Unlike any other cell membranes, those of primary plastids are known to have a very specific composition of structural lipids, dominated by glycosyldiacylglycerols (GDAGs). Should the middle plastid envelope be derived from the primary plastid, it too might be expected to be rich in GDAGs. The authors do, indeed, report that the lipid composition of the middle plastid envelope membrane of E. gracilis more closely resembles the membranes of the primary plastid than other eukaryotic membranes. Thus, the lipid composition of the middle plastid envelope, unlike its protein composition, suggest an origin from the primary plastid.

On the Inside: Citrus Greening Disease and Melatonin 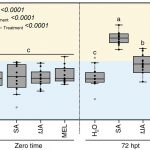 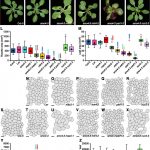 On the Inside: Characterization of a Ribosome Biogenesis Factor
Plant Science Research Weekly Signup