Studies of flower development have lots of information about petals, carpels, and stamens, but let’s not forget the birds and the bees—and the flies and moths—and what draws pollinators to insect-pollinated flowers, including flower color, shape, and rewards that provide energy. For example, to attract pollinators, many plants produce sugar-rich nectar, secreted from specialized organs called nectaries. One tricky (and by tricky, I mean fascinating) aspect of studying nectaries is that different species develop nectaries in different positions relative to the more-conserved positions of the other floral organs. Indeed, most angiosperm species develop nectaries near the carpels or stamens, but some develop nectaries on the petiole or at the base of the leaf.

How do nectaries fit in the ABC model of floral organ specification (reviewed in Irish, 2017), in which MADS-domain and other transcription factors combinatorially specify organs in whorls in the flower. Previous work in Arabidopsis indicated that B, C, and E functions regulate nectary development; however, examining homeotic mutants that lack multiple floral organs may produce unclear results and therefore, the genes that trigger nectary formation remained unclear. To explore nectary specification, Morel et al. (2018) compare Arabidopsis and Petunia hybrida. These flowers represent two major eudicot clades: Arabidopsis belongs to the rosid clade and develops nectaries at the base of the stamen filaments; petunia belongs to the asterid clade and develops nectaries associated with the carpels. 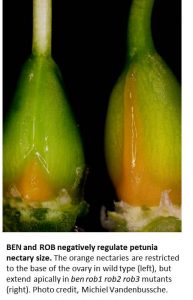 Based on the association of petunia nectaries with carpels, the authors hypothesized that in petunia, C-function genes, which participate in specification of the carpel and stamens, might be required for nectary specification. Petunia has two C genes, PETUNIA MADS BOX GENE3 (pMADS3) and FLORAL BINDING PROTEIN6 (FBP6); Arabidopsis has three, SHATTERPROOF 1 and 2 (SHP1 and SHP2) and AGAMOUS (AG). The authors found that pMADS3 and FBP6 are expressed in petunia ovaries and fbp6-1 pmads3-1 mutants failed to develop nectaries. Moreover, fbp6-1 pmads3-1/+ plants had abnormal carpels and well-developed nectaries, but fbp6-1/+ pmads3-1 plants had nearly normal carpels, but lacked nectaries. Ectopic expression of pMADS3 and FBP6 caused flowers to form ectopic nectaries at the base of the sepals. In Arabidopsis, ag shp1 shp2 triple mutants lack nectaries, but ag and shp1 shp2 mutants develop nectaries, showing that, in petunia and Arabidopsis, the C-function genes redundantly regulate nectary formation. Finally, the authors show that the AP2-like genes BLIND ENHANCER (BEN) and REPRESSOR OF B-FUNCTION (ROB) restrict the expression of pMADS3 and thus limit the extent of nectary formation, with much larger nectaries in ben rob1 rob2 rob3 mutants compared with wild type (see figure).

In Arabidopsis, previous work showed that nectary development requires the YABBY transcription factor gene CRABS CLAW (CRC) and CRC homologs are expressed in nectaries in many flowering plants across the dicots, including rosids and asterids. Arabidopsis has one CRC gene and petunia has two, PhCRC1and PhCRC2. The authors show that in Arabidopsis, ag shp1 shp2 triple mutants lack CRC expression and in petunia, fbp6 pmads3 mutants lack PhCRC1and PhCRC2 expression. CRC homologs from petunia and various Brassicaceae and Solanaceae species have conserved promoter elements indicating that the C-function transcription factors may directly regulate CRC genes. Finally, the authors find that mutants of PhCRC1and PhCRC2 lack nectaries. Therefore, the CRC genes in petunia and Arabidopsis function in specification of nectaries.

Petunia and Arabidopsis represent two different dicot clades, have nectaries in different locations, and have different CRC genes. Despite this, many aspects of nectary specification have been conserved in these species, with redundant regulation of nectary formation by C-lineage genes (SHP1, SHP2, and AG in Arabidopsis and pMADS3 and FBP6 in petunia) and CRC genes.

Design Stars: How GRF-INTERACTING FACTORs Help Determine the Layout of the Root Tip 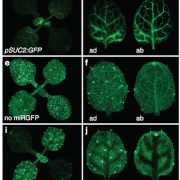 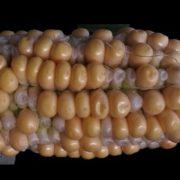