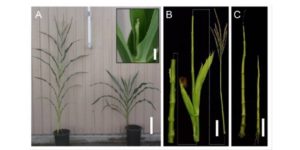 The maize shoot comprises modular domains of leaf, subtending shoot tissue, and an intercalary meristem that sits just above the next leaf down. By contrast to eudicot shoots that form a ring of vascular bundles, maize shoot vascular bundles remain as separate bundles, forming a “disordered” atactostele. Tsuda et al. used a reverse-genetic approach to investigate the function of BELL1-like Homeobox (BLH) transcription factors in maize, and focused on two that are highly expressed in the shoot meristem, BLH12 and BLH14. Both proteins interact in vivo and in vitro with the KN1 transcription factor.  The double mutant blh12/14 was much shorter than its siblings and showed a premature differentiation of the intercalary meristem. Furthermore, in the double mutant vascular bundle number was significantly reduced due to both a decrease in their formation and an increase on their tendency to merge together (anastamose). This study then shows a role for BLH12 and BLH14 in preventing vein fusion, contributing to the maintenance of distinct vascular bundles in maize, and in preventing premature differentiation of the intercalary meristem. Plant Cell 10.1105/tpc.16.00967 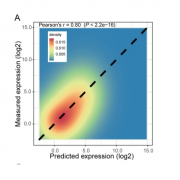 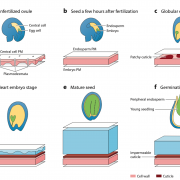 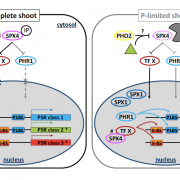 Transcription factor interplay between LEAFY and APETALA1/ CAULIFLOWER during...