Living in California and being surrounded by people who celebrate queerness has given me so much hope for the future. I fantasize about a world where young queer kids have queer role models in STEM, and dont have to face discrimination during their formative years. What magnificent scientists and engineers will these queer kids grow up to be? What can they accomplish and discover when backed-up by supportive family and community?

That fantasy was interrupted after reflecting on the last months of debate about access to healthcare and other support for LGBTQ+ youth. More than a dozen states have followed in Florida’s footsteps and have proposed similar “Don’t say Gay” bills which prohibit school curriculum from including any discussion of gender identity or sexual orientation. Preventing youth from learning about the existence of LGBTQ+ people not only breeds ignorance surrounding the community, it tacitly endorses the vilification of queer people and queerness in general. Perhaps most insidiously, it causes LGBTQ+ youth to feel isolated and ‘othered’ in their classroom, which not only ignores their existence, but prohibits mention of it. 15 states are instating or considering bills that limit minors’ access to gender affirming care, with some states going as far as to classify gender affirming care as child abuse. Blocking access to this specific healthcare will undoubtedly increase discontent for trans kids, emphasize stigma that they face, and cause issues that will follow them through their lives.  Its widely known that suicide rates are much higher among queer people, especially transgender (trans) youth. This is not inherent to queerness, instead it stems from the stigma that queer people face in society. When a young queer person has even one adult in their life who supports them for who they are, suicide attempts decrease drastically. Denying life-saving healthcare to trans kids, along with the seemingly impending roll-back of other rights for queer people, is going to make life harder for LGBTQ+ youth. It will likely cause an increase in suicide attempts. Queer people can’t grow up to be scientists, engineers, and mathematicians if they don’t survive to adulthood.

It has been difficult to continue my research and make progress towards my next steps as a scientist in the midst of all of this. Perhaps even harder is trying to maintain a hopeful tone as I watch my community get repeatedly debated under the guise of ‘states rights’. Not only do I worry for myself and my loved ones in the LGBTQ+ community, I worry for every queer kid who is growing up in a society that is comfortable debating their human rights as if it were a political issue. Recently I was venting to my partner about how hopeless it all feels. She reminded me that if we only focus on what is going wrong, it can make us apathetic, and feel like nothing we could do would help. Grateful for her foresight and level-headedness, I paused to consider that she was probably right. It may seem like things are only getting worse for queer youth, but that isn’t entirely true. Although the existence of these anti-queer bills suggest harrowing times ahead, society has been making strides in the other direction in other ways. The widespread knowledge of LGBTQ+ people in everyday life is evidence that society is warming up to us. Many more people are comfortable being visible as queer in their professional lives than ever before. There is definitely work that needs to be done, but it isn’t all bad, and there is so much potential for positive change even outside of policy changes. Choosing to be hopeful is harder than apathetically steeling yourself for more tragedy to come, but it’s also the only way to continue making progress. It is perhaps more important than ever to be ‘out’ in STEM, to be a beacon of hope for queer kids. Despite the harmful legislation being pushed on queer youth, LGBTQ+ kids will still exist. They will continue to adapt and learn to express themselves beyond the confines of the bigoted system they were born into. They will continue to need loving and supportive adults in their life to recognize them as they are, and nourish their curiosities, wherever they lie. Maybe I can be the supportive adult in a young person’s life, and give them a better chance of growing up and discovering something great.

Marlo Hall is an incoming PhD student at UC Berkeley, interested in the molecular basis of plant-pathogen interactions. For the past 2 years, they have been working at a biotech company studying human biology. Marlo first became interested in plant biology in Alisa Huffaker’s lab at UCSD, and after the break from plant sciences, they are very excited to be directly involved in plant pathology again. 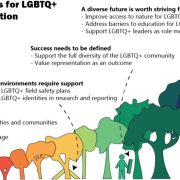 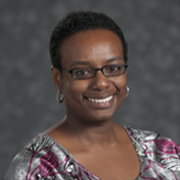 Letter to the editor: Planting equity: Using what we know to cultivate growth as a plant biology community

It’s not about who you know, but how to find them

Transitioning in the lab 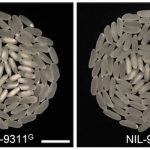