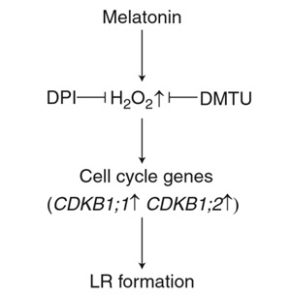 Ann. Botany. Melatonin was first identified in plants in 1995. Since then, it has been found to be involved in many aspects of plant response to biotic and abiotic stress. Chen et al. investigate the effect of melatonin during lateral root (LR) development in alfalfa and Arabidopsis seedlings. Exogenous application of melatonin was found to increase H2O2 content in alfalfa seedlings as well as increased LR number, length, and density. This LR formation was impaired when melatonin treatment was supplemented with inhibitors of endogenous H2O2 production. Similarly, overexpression of a melatonin synthesis gene in Arabidopsis increased endogenous melatonin levels and H2O2 accumulation which enhanced LR formation. Blocking H2O2 production also inhibited melatonin-induced LR formation in Arabidopsis. Furthermore, transcript levels of two cell cycle regulatory genes related to LR formation were upregulated in both aforementioned alfalfa and Arabidopsis assays and negatively impacted by loss of H2O2. These data add to our knowledge of the melatonin pathway and its role in lateral root formation (Summary by Alecia Biel) Ann. Botany. 10.1093/aob/mcx207. 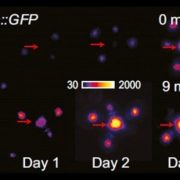