Cadmium (Cd) is a toxic heavy metal that is relatively mobile in the soil and has become a serious worldwide environment problem. Cd is easily taken up by plant roots where it can be loaded into the xylem and transported to above-ground tissues. Cd accumulation in the shoot inhibits plant growth and can potentially cause harm to humans and livestock by entering the food chain.  Pak choi (Brassica campestris ssp. chinensis is one of the most consumed leafy vegetables in China and East Asia,), readily accumulates Cd. Previously, it has been found that the expression of the two main transporters involved in Cd uptake (BcIRT1 and BcZIP2) was significantly repressed by H2. These considerations led Wu et al. (10.1104/pp.20.00377) to examine whether H2 might be incolved in mitigating the harmful effects of Cd uptake in pak choi. They report that the exposure of pak choi roots to Cd resulted in a rapid increase in the intracellular H2 production. Moreover, the exogenous application of hydrogen-rich water (HRW) reduced Cd uptake and accumulation. The authors show that these effects are dependent upon the transport of calcium ions (Ca2+) across the plasma membrane and the apoplastic generation of hydrogen peroxide (H2O2) by respiratory burst oxidase homolog (BcRbohD). The reduction in root Cd uptake by HRW or H2O2 was abolished in the iron-regulated transporter1 (Atirt1) mutant of Arabidopsis (Arabidopsis thaliana), and pak choi pretreated with hydrogen showed decreased BcIRT1 transcript levels. HRW induced a rapid Ca2+ influx into roots, and two Ca2+ channel blockers, gadolinium ion (Gd3+) and lanthanum ion (La3+), eliminated the HRW-induced increase in BcRbohD expression, H2O2 production, and Cd­2+ influx inhibition. Collectively, these results suggest that the Cd-protective effect of H2 in plants may be explained by its control of the plasma membrane-based NADPH oxidase encoded by RbohD, which operates upstream of IRT1. 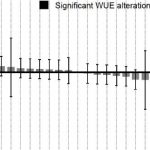 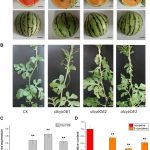 How Cultivated Watermelon Derived its Red Flesh
Scroll to top