The slogan, ‘more crop per drop’, which was popularised in the early 2000s, depicts the need to improve the productivity of crops for the same water inputs (Kijne et al., 2003). Whilst the approaches by which this could be achieved have evolved and expanded, the motivation remains stronger than ever, with water scarcity set to worsen under climate change projections and population growth (Gosling and Arnell, 2016).

Leaf gas exchange forms the basis of the water-for-carbon trade-off with around 200 mols of water lost through transpiration for every mol of CO2 assimilated, because the air outside the leaf is generally much drier than the wet leaf interior. Consequently, whenever stomata open to allow the diffusion of CO2 in to drive photosynthesis, water vapor is driven out of the leaf. At the plant level, the efficiency by which plants use water (water-use efficiency, WUE = ), depends on the temporal variation in gas exchange and the spatial allocation of carbon during plant development. In this issue of Plant Physiology, Simon et al. (2020) demonstrate an important and often over-looked aspect influencing WUE – the circadian clock.

The circadian clock is an endogenous timer that drives rhythms in many biological events, including stomatal conductance and assimilation rate (e.g. Dodd et al., 2004), with demonstrated relevance in both ecological (e.g. Resco de Dios et al., 2016) and agricultural settings (e.g. Edwards et al., 2011). In Arabidopsis thaliana, the circadian clock regulates the temporal expression of around a third of the genome (Covington et al., 2008). Compelling evidence suggests the fitness advantage afforded by circadian timing is the capacity to anticipate and adjust molecular and physiological responses to future stimuli via internal and external feedbacks (e.g. Dodd et al., 2005). For example, Arabidopsis mutants lacking central clock components incorrectly anticipate dawn and as a result incorrectly adjust the rate of starch utilisation, exhausting their reserves before dawn, and decreasing biomass production (Graf et al., 2010). 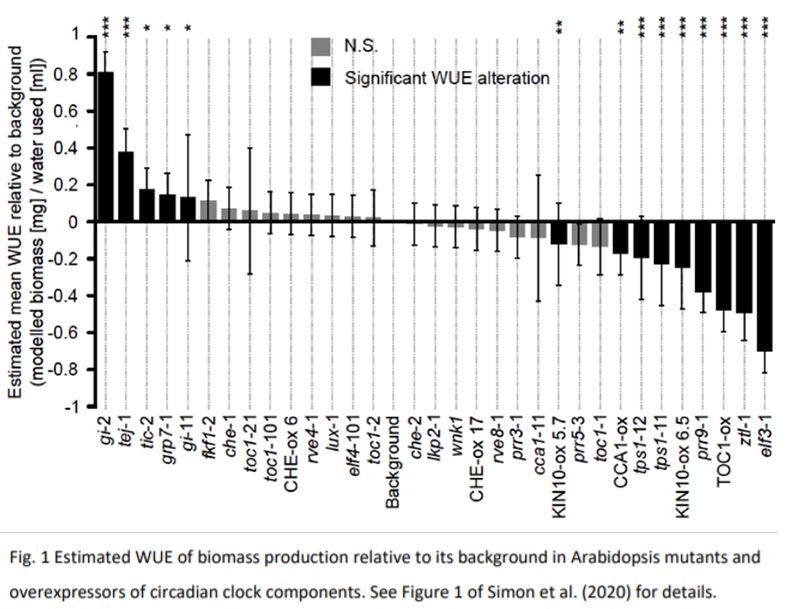 In Simon et al. (2020), 32 single mutants or overexpressors of genes associated with circadian regulation were investigated. These included clock genes associated with particular phases of expression (e.g. morning, afternoon, and evening), genes that alter the photoperiod-dependent transition from vegetative to flowering, and genes encoding proteins that provide environmental inputs to the circadian oscillator.

Mis-expression of circadian regulation genes resulted in a relative change in WUE of biomass production ranging from +80% to -70%, with 44% of lines differing significantly from the wild-type (Fig 1). In interpreting the WUE patterns, three major observations stood out from this study: 1) the magnitude and direction of the effect on WUE was not confined to a specific sub-loop of the circadian oscillator or restricted to its input or output pathways, suggesting that the entire circadian oscillator can influence WUE; 2) there was no obvious relationship between the circadian phenotypes reported to arise from each misregulated gene and the WUE of each of these lines; and, 3) the impact of the misregulated genes on WUE was unlikely the sole effect of altered gas exchange, as changes in plant development and rosette architecture were also noted. The complexity of the circadian network on whole-plant physiology was reinforced by the fact that plants with constitutive overexpression of TIMING OF CAB EXPRESSION1 (TOC1) showed a decrease in WUE, but there was no change to WUE when TOC1 was overexpressed only in guard cells where regulation of gas exchange is likely more direct (Hassidim et al., 2017). Thus, an important next step for interpreting the WUE response of each line will be determining how regulation of the circadian clock in different cell types influences carbon accumulation and water use, especially in those lines with increased WUE.

Under the experimental conditions of this study, no lines increased biomass relative to the background genotype. This mirrors the common conundrum found in breeding for improved drought resistance, with genotypes displaying increased WUE often being poor performers under well-watered conditions (Blum, 2009). It also supports the idea that circadian regulation has been optimised for carbon maximisation rather than WUE per se (Resco de Dios and Gessler, 2018). Thus, it will be interesting to see how these lines perform under different environmental conditions, particularly reduced water availability. Of course, translating these molecular approaches to agricultural crops will be paramount to narrowing down gene targets given species-specific responses to circadian regulation have been observed (Müller et al., 2014). But as the study by Simon et al. (2020) has reinforced, the influence of the circadian clock on WUE is undeniable and presents an exciting way forward for crop research and modelling of ecosystem carbon and water fluxes.

Blum A (2009) Effective use of water (EUW) and not water-use efficiency (WUE) is the target of crop yield improvement under drought stress. Field Crops Research 112: 119-123

Graf A, Schlereth A, Stitt M, Smith AM (2010) Circadian control of carbohydrate availability for growth in Arabidopsis plants at night. Proceedings of the National Academy of Sciences 107: 9458

Resco de Dios V, Gessler A (2018) Circadian regulation of photosynthesis and transpiration from genes to ecosystems. Environmental and Experimental Botany 152: 37-48

The fascinating origin of some favorite foods and how plants help in the fight... 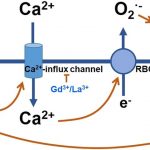