The last week of the year is the time to look back and reflect. We like to take this opportunity to recognize the good work done by the plant science community. Over the next six days we’ll remind you of some of the big stories and successes that came from our community. These stories were highly accessed through the ASPB and Plantae.org blogs, our many social media accounts, and our journal websites. We hope you enjoy this look back at what has been an eventful and productive year in plant science. 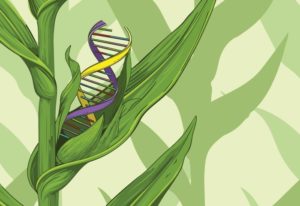 Spotlight: Once again, one of the biggest stories of 2017 has been how the genome-editing power of CRISPR/Cas9 is revolutionizing both basic and applied plant science. If you’re not familiar with CRISPR, you can find a nice, accessible overview in C&EN by Bomgardner, “CRISPR: A new toolbox for better crops”.

Throughout the year we’ve seen powerful applications of this precision technology, from the production of parthenocarpic tomatoes (which form fruit without requiring pollination) by Ueta et al., accelerating the domestication of new crops (Østerberg et al.) to the generation of targeted or untargeted diversity for analysis and selection, including a big improvement in tomato yield through editing a few key genes (Rodríguez-Leal et al.). CRISPR is also being employed for disease resistance: see Bart and Taylor for a nice discussion of its use in the development of disease-resistant cassava. See also reviews by : Puchta, Zhu et al.,  Čermák et al., Arora and Narula, and Volpi e Silva and Patron. Improvements in the CRISPR methods include the use of the Cpf1 nuclease (Begemann et al.),  the finding that heat-treatment enhances CRISPR editing efficiency (LeBlanc et al.) and RNA editing with CRISPR-Cas13 (Cox et al.).

Our top blog post in January was guest-written by Rosanne Quinelle, Associate Professor in the School of Life and Environmental Science at the University of Sydney, Australia (@ah_cue). Roseanne wrote about BotanyOnline, a collection of online resources for learning about botany, which includes an interactive, dichotomous key to all species of vascular plants in the Sydney Region and a Campus Flora app. Be sure to check out the Virtual Slides, very high resolution scanned micrographs of plant sections. They are irresistible!

Spotlight: Tieman, Zou et al. from Harry Klee’s group at the University of Florida reported on a Chemical genetic roadmap to improve tomato flavor, which was featured on the cover of Science. The study combined several approaches including chemical and genomic analyses along with consumer tasting panels, and identified several loci associated with tasty tomatoes. (See tomorrow’s post to see how this article made headlines again in April).

Cephalotus follicularis is a carnivorous Australian pitcher plant. Genomic and transcriptomic analysis revealed that although carnivory evolved independently multiple times, similar genes are involved in diverse species. The article that generated the news is by Fukushima et al., and some of the press includes a Nature News article and a story on NPR.

The other big genome story in February was that of quinoa, Chenopodium quinoa (see Jarvis et al.) Quinoa is a salt-tolerant plant that produces a gluten-free grain, and has widely been described as a “superfood”. The quinoa genome was covered in Popular Science, The Christian Science Monitor, BBC, and many other news outlets.

Join us tomorrow to revisit highlights from March and April.

Review: On the selectivity, specificity and signaling potential of long-distance...