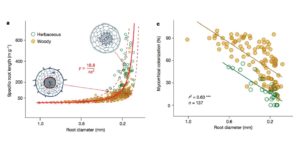 Roots differ in their form and function, as they need to compete for water and nutrients in the wide range of environment. Although we are starting to understand some adaptive aspects of individual root morphology features, the adaptive features of root organization are still poorly understood. Ma and colleagues evaluated the roots of 369 species native to 7 major biomes across 3 continents. The team focused on the plants native to the biomes and evaluated primary root traits related to morphology, physiology and mycorrhizal association. Principle component analysis revealed that traits contributing to the observed variation include root diameter and mycorrhizal symbiosis. Thin-rooted varieties dominated in the biomes with high seasonal variations, where relatively small investment of carbon correspond to exploration of large soil volume for moisture and nutrients, reducing dependence on the mycorrhizal symbiosis. Thick roots were associated with the more stable climates as well as ancient taxonomic groups. The authors hypothesize that thin root species have advantage of adapting their root distribution to seasonal changes in soil resources and inhospitable conditions. (Summary by Magdalena Julkowska) Nature: 10.1038/nature25783 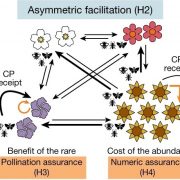 Pollinators contribute to the maintenance of flowering plant diversity (Nature)