Arteaga et al. report that some natural populations of Arabidopsis have trichomes on fruits. They exploit this previously unknown trait to explore the genetic underpinnings of trichome development and their evolutionary relevance. Plant Cell http://bit.ly/3byAMFl

Background: Trichomes, or plant hairs, are specialized epidermal cells that protect different organs from sunlight or water loss, and act as defensive barriers against herbivores. Historically, the model plant Arabidopsis thaliana has been taxonomically characterized by the presence of trichomes in vegetative organs (leaves) and their absence from reproductive ones (fruits). However, in this work we have identified natural populations of A. thaliana that develop trichomes in fruits, which appears as a new trait for this plant.

Question: We wanted to find the genetic mechanisms that allowed the evolution of trichomes in fruits of Arabidopsis plants.

Findings: We found that the formation of trichomes in fruits requires a combination of mutations in three genes regulating trichome development, TRICHOMELESS1 (TCL1), TRIPTYCHON (TRY) and GLABRA1 (GL1), all encoding core transcription factors of the regulatory network for trichome development. TCL1 and TRY are repressors of trichome formation and carry mutations that reduce their expression. By contrast, GL1 promotes trichome development and bears a mutation that increases the activity of the protein. Plants carrying mutations in only one or two of these genes do not develop trichomes in fruits, indicating that these genes interact to regulate trichome formation. In addition, we show that this new trait has evolved specifically in an ancient relict lineage from the Iberian Peninsula, where it is associated with spring precipitation. Hence, our results suggest that trichome development in fruits might be involved in climatic adaptation.

Next steps: On one hand, we plan to study the ecological relevance of trichomes in fruits of Arabidopsis. On the other hand we want to determine if the evolution of this trait in other plants has been achieved by similar or different molecular mechanisms. 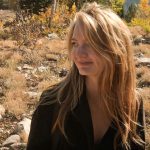 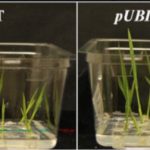 How a Mangrove tree can help to improve the salt tolerance of Arabidopsis and...
Plant Science Research Weekly Signup