Foremost amongst the epigenetic modifications in plants are DNA and histone methylation. While DNA and histone modifications are often associated with heterochromatin and untranscribed DNA, spread of these marks into active genes can be detrimental, leading to a plethora of developmental abnormalities [5, 6]. With a reinforcing feedback loop between CHG methylation by the DNA methyl transferase CHROMOMETHYLASE3 (CMT3) and H3K9 methylation by the histone methyltransferases SU(VAR)3-9 HOMOLOG4 (SUVH4), SUVH5, and SUVH6, active demethylation is required to protect transcribed regions of the genome from accumulation of methylation. H3K9 demethylation is provided by the Jumonji C (JmjC) domain-containing protein INCREASE IN BONSAI METHYLATION1 (IBM1; [5-7]), while DNA demethylation is regulated by DNA glycosylases/lyases including REPRESSOR OF SILENCING1 (ROS1) and ROS3 [8, 9].

IBM1 transcripts are alternatively spliced, with the two longer mRNAs that use a distal polyadenylation site providing functional protein [10]. Alternative splicing of IBM1 is regulated by a complex containing IBM2 and ENHANCED DOWNY MILDEW2 (EDM2). IBM2 has RNA recognition motifs and a Bromo-Adjacent Homology (BAH) domain, which is commonly found in chromatin-associated proteins such as DNA methyltransferases. IBM2 is required for production of full length transcripts from genes with intergenic heterochromatin [11]. EDM2 contains zinc finger domains and is thought to act as an RNA methyltransferase [12, 13]. Other targets of the IBM2-EDM2 complex that also contain intronic heterochromatin include resistance gene RECOGNITION OF PERONOSPORA PARASITICA7 (RPP7), AT1G11270 which encodes an F-box protein, and AT3G05410, which encodes a photosystem II reaction centre PsbP family protein.

In this issue of Plant Physiology, Nicolas Bouché’s group at INRA in Versailles further investigated IBM2 function in alternative polyadenylation site selection by identifying an interacting protein [14]. To isolate IBM2 interactors, they performed a forward genetic screen using the ibm2-4 allele and selected for restoration of a wild-type phenotype. To exclude mutations that more broadly affected DNA or histone methylation of IBM1 targets, a secondary screen ascertained whether transcript levels of AT3G05410 were at least partially restored as transcription of this gene is controlled by IBM2 but not IBM1. Through this approach a new allele of FPA was identified that has intermediate AT3G05410 transcript levels. FPA was originally identified as a component of the autonomous flowering time pathway [15], a function that arises from its broader regulation of polyadenylation site selection [16, 17]. These functions of FPA in flowering time and RNA processing are shared by FCA, another RNA recognition motif-containing protein [17, 18]. 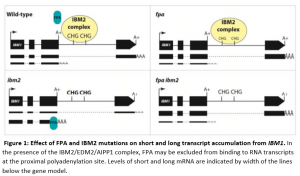 Examining DNA methylation specifically at IBM1, CHG and CHH methylation over the heterochromatic region of the intron were reduced in fpa and fpa ibm2-4 mutants, but unaffected by ibm2-4 alone. Overexpression of IBM1 long transcripts in a wild-type background did not alter CHG methylation in the IBM1 intron, therefore the reduction in methylation at IBM1 in fpa mutants is unlikely to be due IBM1 reducing H3K9 methylation levels and hence limiting action of the DNA/H3K9 methylation feedback loop. Genome-wide, relatively few regions showed changes in DNA methylation in fpa mutants, with only 70 hypomethylated and 86 hypermethylated differentially methylated regions identified by whole genome bisulfite sequencing. The majority of the hypermethylated regions were within genes, whereas most hypomethylated regions were associated with transposons or were intergenic. These results demonstrating that DNA methylation levels are affected relatively few loci in fpa are consistent with previous reports that FPA does not have an extensive role in RNA-mediated chromatin silencing [16]. Methylation was mostly restored to wild-type levels upon complementation of the fpa mutant indicating that the effects of FPA mutation are transient and methylation can be restored upon reintroduction of FPA.

Deremetz and colleagues also examined the function FPA in regulating transcription of genes that are IBM2 targets where the heterochromatic domain is non-intronic. They identified 18 transposons that were downregulated in mutants of components of the IBM2-EDM2 complex by using previously published RNA-seq data [19]. In two cases, these transposons are non-intronic targets which were downregulated in expression in ibm2 and fpa ibm2 mutants but not in fpa mutants, indicating that FPA and IBM2 only act antagonistically at genes with intronic heterochromatin.

Together, the results by Deremetz and colleagues demonstrate that FPA affects DNA methylation of a relatively small number of targets, confirming a limited functional role in polyadenylation site usage. At select loci, IBM2 and FPA act antagonistically to control transcription. These loci include key genes such as IBM1, which encodes a protein involved in H3K9 demethylation, and RPP7, which functions in race-specific disease resistance. Given previous links between FPA and FCA in RNA processing, it will be informative to know whether FCA also functions at IBM2 targets, and whether there is direct interaction between the IBM2/EDM2 complex and FPA/FCA. Also, given the limited number of loci affected by FPA, identification of other proteins that interact similarly with IBM2 at further loci where methylation accumulates in ibm2 mutants will be important.

Figure 1: Effect of FPA and IBM2 mutations on short and long transcript accumulation from IBM1. In the presence of the IBM2/EDM2/AIPP1 complex, FPA may be excluded from binding to RNA transcripts at the proximal polyadenylation site. Levels of short and long mRNA are indicated by width of the lines below the gene model.

Diverse strategies coping with winter in barley and its relatives 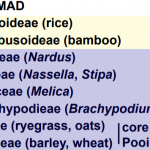 Announcing the Career Fair at Plant Biology 2019
Scroll to top