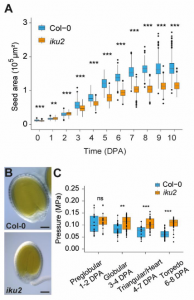 Seed size is a plant trait with agricultural and ecological relevance. However, the mechanisms that determine the final size of seeds are still subject to debate. Here, Creff and colleagues use computational models and mutant experiments to dissect the role of endosperm turgor in Arabidopsis seed size. Typically, turgor drives cell expansion, and previous studies showed that endosperm turgor typically decreases towards the end of seed development as growth slows. However, in haiku2 (iku2) mutants, known for their small seed size, turgor is higher and remains high throughout seed formation. How can increased turgor lead to smaller seeds? Previously, the authors showed that expression of a mechanosensitive gene ELA1 is elevated and induced earlier in iku2 mutants in the outer integument, the cell layer surrounding the endosperm that will give rise to the testa. The authors then used modeling to test the hypothesis that the smaller seed size of the iku2 mutants is caused by precocious stress-dependent stiffening of this region. In support of this model, the authors found an increased expression of pectin methylesterases in the outer integument, which could lead to its precocious stiffening. The authors conclude that the increased endosperm turgor induces precocious testa stiffening and therefore premature growth arrest and smaller seed size. Therefore, this research indicates that endosperm turgor has a dual and antagonistic role in defining seed size and provides fascinating insights into the molecular and biomechanical mechanisms behind it. (Summary by Carlos A. Ordóñez-Parra @caordonezparra) bioRxiv. 10.1101/2021.03.22.436392 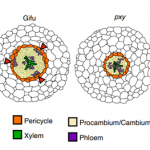 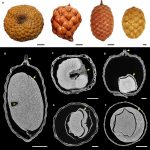