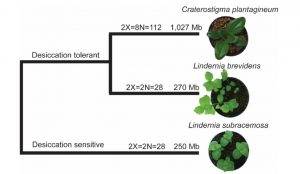 Desiccation tolerance is the property of being able to survive and recover from extreme dehydration. Although there are many desiccation-tolerant plant species, efforts to identify the genetic basis of desiccation tolerance have been limited by a lack of closely-related desiccation sensitive species. VanBuren et al. compared two species of Lindernia, one of which is desiccation sensitive. The comparison of these closely aligned genomes reveals that some desiccation-tolerance genes such as those encodling LEAs (late-embryo abundant) and ELIPs (early light induced proteins) are substantially duplicated in L. brevidens, and there is a general rewiring of the transcriptional networks. The authors conclude, “Desiccation tolerance likely evolved from a complex, additive series of gene duplications and pathway rewiring rather than a simple master regulatory switch.” (Summary by Mary Williams) Plant Cell 10.1105/tpc.18.00517 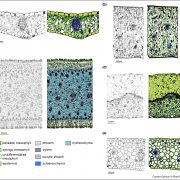 The imprinted gene PEG2 acts as a sponge for the transposon-derived siRNA854,...