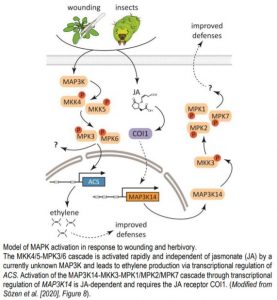 Clade C MAPKs MPK1 and MPK2 that act downstream of MKK3 had previously been associated with wounding and other stress responses (Ortiz-Masia et al., 2007). Sözen et al. tested clade C MPK activation in response to wounding and found that the activity of MPK1, MPK2, and MPK7 increased 30 min to 2 hours after wounding in an MKK3-dependent manner. The authors hypothesized that MKK3 is regulated by clade III MAP3Ks (MAP3K13-MAP3K20). In line with this, MKK3 interacted with MAP3K15-MAP3K20, as well as MAP3K13 and MAP3K14 (after truncation of the C-terminus) in a yeast two-hybrid assay; and both MKK3 and a clade III MAP3K were required for the activation of MPK2 transiently expressed in mkk3 protoplasts. MPK1/MPK2/MPK7 activation in response to wounding was dependent on de novo protein synthesis. Wounding led to a strong increase in MAP3K14 mRNA levels within 15-30 minutes, matching the timing of the relatively slow activation of MPK1/MPK2/MPK7 after wounding. The role of MAP3K14 as a regulator of MPK2 activation upon wounding was further supported by analysis of genome-edited plants encoding MAP3K14 versions with a truncated kinase domain. In the edited plants, MPK2 activation was strongly reduced.

JA has a central role in wounding responses, so the authors tested the effect of JA on MPK2 activation and found that JA activated MPK2 in wild-type, but not in mkk3 plants with similar kinetics as wounding. In turn, in JA biosynthesis and signaling mutants, wounding-induced activation of MPK2 was strongly reduced, further supporting the importance of JA biosynthesis and signaling in the regulation of MKK3-MPK2 module in response to wounding.

In line with previous findings (Hettenhausen et al., 2015), the authors detected rapid MPK3 and MPK6 activation 15 minutes after wounding, but found that this occurred independent of MKK3 and MAP3K14 and dependent on MKK4 and MKK5. However, MPK3/MPK6 activation was not triggered by JA treatment and not compromised in a mutant deficient in JA perception, indicating JA independence of the MKK4/MKK5-MPK3/MPK6 module in wound responses.

Wounding assays only partly mimic herbivory, so the authors asked, whether insect feeding on plants triggers similar activation of the MAPK cascades. Feeding of Spodoptera littoralis larvae on plants induced weak activation of MPK3/MPK6 after 15 minutes, but strong activation of MPK2 after 1 hour, which was dependent on MKK3 and JA sensing. After long term feeding on wild-type or mkk3 plants, S. littoralis larvae grown on mkk3 plants were bigger, suggesting that the defense system in mkk3 did not efficiently deter them. Taken together, these data suggest that the relatively slow JA-dependent activation of the MAP3K14-MKK3-MPK1/MPK2/MPK7 signaling module has a prominent role in activating defenses to protect plants against herbivory (see figure). Identifying the downstream targets of the module will help to better understand how plants defend themselves against herbivores.

A closed mouth catches no pathogens: how plants sense bacteria and regulate... 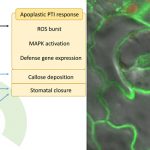 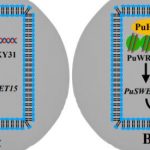 In the Search for the SWEETest Pear
Scroll to top