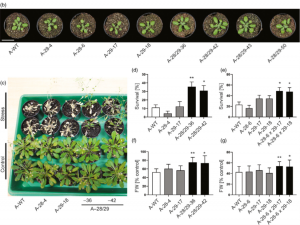 Several potential targets have been suggested to improve drought tolerance and water-use efficiency of crops, but many genes when upregulated can cause negative growth trade-offs. Stress recognition and signaling proteins are attractive targets as they may exert control over multiple downstream pathways and are only activated during stress so are less likely to cause negative phenotypes. Schulz et al. performed novel combinatorial engineering with calcium-dependent protein kinases (CPKs) to identify gene combination that increased drought tolerance. They used 15 Arabidopsis CPK genes to transform Nicotiana tabacum with random combinations of CPKs and screened the progeny for drought resistance and negative growth phenotypes. CPK28 and CPK29 were identified through the screen to increase drought tolerance despite neither being previously implicated in abiotic stress. Further analysis in both Arabidopsis and tobacco uncovered that transformation with both CPK28 and CPK29 are jointly required for increased drought tolerance, possibly through enhanced brassinosteroid signaling. The combinatorial approach used in this study can be used to uncover hidden synergistic interactions between genes in complex genetic networks for both basic and applied research.  (Summary by Katy Dunning @plantmomkaty) Plant Biotechnol. J. 10.1111/pbi.13441 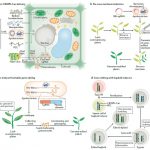 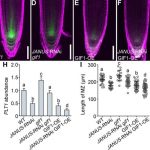 Transcriptional regulation of PLETHORA1 in the root meristem through an importin...
Scroll to top