In C4 species, the expression of photosynthesis genes is partitioned such that leaf mesophyll and bundle sheath cells accumulate different 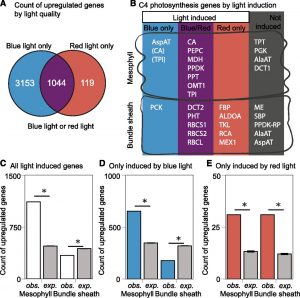 components of the photosynthetic pathway. The expression of nucleus-encoded photosynthesis genes is modulated both by photoreceptor activity and by a network of light-responsive transcription factors. Different wavelengths of light also influence post-transcriptional regulation of gene expression, modulating translational efficiency through light-induced alternate start codon usage and protein degradation through ubiquitination pathways. Different wavelengths of photosynthetically active light vary in their ability to penetrate leaf tissues, with longer wavelength red light penetrating significantly deeper than shorter wavelength blue light. Hendron and Kelly (10.1104/pp.19.01053) have tested the hypothesis that the gene regulatory networks for photosynthesis are partitioned between bundle sheath and mesophyll cells in the C4 plant maize (Zea mays) in a manner that is consistent with biophysical light filtration within the leaf. That is, the expression of genes whose transcripts preferentially accumulate in mesophyll cells will be responsive to both blue- and red-light stimulation, while expression of genes whose transcripts preferentially accumulate in bundle sheath cells will be responsive only to red-light stimulation. They show that transcription factors and photoreceptors that are known to regulate photosynthesis differentially accumulated between mesophyll and bundle sheath cells in maize leaves. Moreover, blue light, but not red light, resulted in rapid accumulation of chlorophyll fluorescence from functional PSII assembly. Furthermore, transcripts encoding mesophyll-specific genes increased in abundance in response to either red or blue light, while transcripts  encoding bundle sheath–specific genes increased in abundance in response to red light. Together, these findings provide evidence that the subdivision of light signaling networks contributes to cellular partitioning of C4 photosynthesis in maize.

The Fate of Acetate During Hypoxia 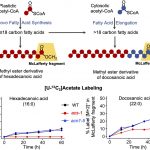 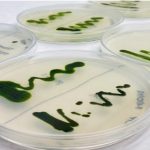