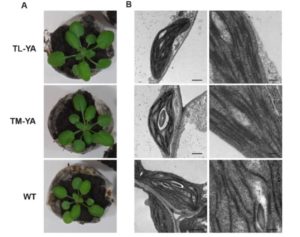 Transient changes in intracellular free Ca2+ concentration ([Ca2+]) are involved in the sensing of a wide variety of abiotic and biotic stimuli iIn plants. The unique spatiotemporal patterns in [Ca2+] that result enable specific stimulus-response coupling. Several intracellular compartments of the plant cell participate in Ca2+ homeostasis, including the vacuole, endoplasmic reticulum, mitochondria, and plastids. Numerous studies indicate that chloroplasts require a fine-tuned control of the organellar Ca2+ concentration. It is known that free Ca2+ modulates crucial aspects of photosynthesis, including the assembly and function of PSII, the regulation of stromal enzymes of the Calvin cycle, as well as other plastid-localized processes such as the import of nucleus-encoded proteins and organelle division. However, little is known about the mechanisms that underlie the generation and dissipation of Ca2+ transients and the transduction of environmental signals within plastids or their localization inside the organelle. To investigate the involvement of thylakoids in Ca2+ homeostasis and in the modulation of chloroplast Ca2+ signals in vivo, Sello et al. (10.1104/pp.18.00027) targeted the bioluminescent Ca2+ reporter aequorin (fused with Yellow Fluorescent Protein) to the lumen and the stromal surface of thylakoids in Arabidopsis. In resting conditions in the dark, free Ca2+ levels in the thylakoid lumen were maintained at about 0.5 mM, which was a 3- to 5-fold higher concentration than in the stroma. Monitoring of chloroplast Ca2+ dynamics in different intrachloroplast subcompartments (stroma, thylakoid membrane, and thylakoid lumen) revealed the occurrence of stimulus-specific Ca2+ signals, characterized by unique kinetic parameters. Oxidative and salt stresses initiated pronounced free Ca2+ changes in the thylakoid lumen. Evidence was also obtained for dark-stimulated intrathylakoid Ca2+ changes. The novel toolkit of thylakoid-targeted Ca2+ reporters reported upon advances our current understanding of Ca2+ regulation in chloroplasts and paves the way for future investigations on plant organellar Ca2+ signaling.

Bridging the Gap Between Pathogen Detection and Defense Activation

Iron Accumulation and Fraxetin, a Coumarin
Scroll to top