The environment plays a major role in determining whether, when, and how growth occurs, and resource allocation towards growth is an important factor in many contexts. For example, plants whose defenses against pathogens are activated often grow less, and plants that must grow taller to reach the light in crowded and shaded conditions can be compromised in defense. The balance between growth and defense in plants has been known for decades (for a review, see Huot et al. 2014), but the precise interplay of these factors in shade conditions, specifically, and the incorporation of light and hormones into these phenomena — leading to potentially complex crosstalk among these pathways — have yet to be examined in depth. Liu et al. (2019) have made headway in this area, elegantly demonstrating, in a series of experiments testing various genetic and physical interactions among molecular players in Arabidopsis thaliana, the connection between phytochrome and jasmonic acid (JA) signaling pathways in the shade avoidance syndrome, via the interaction of FAR-RED ELONGATED HYPOCOTYLS3 (FHY3) and FAR-RED-IMPAIRED RESPONSE1 (FAR1) transcription factors with JAZ proteins.

In light with a low red–to–far-red ratio (R/FR), i.e., shade, which signals to plants that other plants are nearby and preferentially absorbing red light for photosynthesis, wild-type (WT) plants grow tall, but there is such a thing as being too tall. In the shade, the fhy3 single and fhy3 far1 double loss-of-function mutants grew even taller (via increased cell length) than WT, and lost the ability to repress growth in response to JA (see figure), just like a JAZ1 overexpressor line and the coi1 mutant that is defective in JA perception. Shade-induced marker genes were also significantly more upregulated in these plants with excessively elongated hypocotyls, and fhy3 far1 mutants specifically exhibited an overall downregulation of stress-response genes and a marked reduction in the upregulation of JA genes as compared to WT plants, in shade, independent of JA treatment (see figure). While WT plants were more susceptible to the necrotrophic fungus Botrytis cinerea in the shade as compared to in high R/FR light, fhy3 and fhy3 far1 mutants were even more susceptible, in both shade and non-shade conditions (see figure). 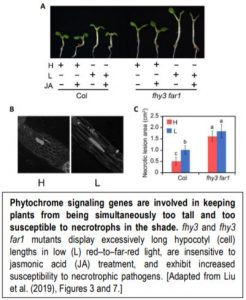 On a mechanistic level, Liu et al. (2019) provide molecular evidence suggesting that normally, in shade conditions, FHY3 and FAR1, which activate phytochrome responses to far-red light, bind to the promoters and increase the expression of the PAR1 and PAR2 genes to reduce excessive growth, and also bind to MYC2, MYC3, and MYC4 to help induce the expression of JA-mediated defense genes. JAZ proteins, inhibitors of JA signaling, directly bind to and counteract FHY3 and FAR1 activity, causing reduced JA-mediated defenses and simultaneous increased growth.

These results support a proposed role for FHY3 and FAR1 in JA-mediated defense, and importantly, support the notion that being too tall can make plants even more susceptible to some stresses. While JA promotes defense against necrotrophic pathogens and insect herbivory, salicylic acid (SA), which counteracts JA, promotes defense against biotrophs. Therefore, it is interesting to speculate as to whether, during shade avoidance, resistance against necrotrophs is independent of SA, and how the various hormone pathways are coordinated to effect resistance to other pathogens. Only time (and shade!) will tell.

Phytochrome signaling genes are involved in keeping plants from being simultaneously too tall and too susceptible to necrotrophs in the shade. fhy3 and fhy3 far1 mutants display excessively long hypocotyl (cell) lengths in low (L) red–to–far-red light, are insensitive to jasmonic acid (JA) treatment, and exhibit increased susceptibility to necrotrophic pathogens. [Adapted from Liu et al. (2019), Figures 3 and 7.] 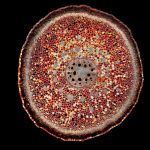 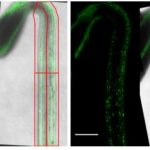