Much like the spikes that deter birds from sitting on fences, trichomes — hair like projections on the leaf surface — are the epidermis’ first line of defence, discouraging insects and other pests (Levin, 1973). In addition to their role protecting the plant, trichomes are an excellent marker to study developmental biology: they arise from the same progenitor cells as stomata and pavement cells, are easily visible, and their patterning is under strict genetic control. 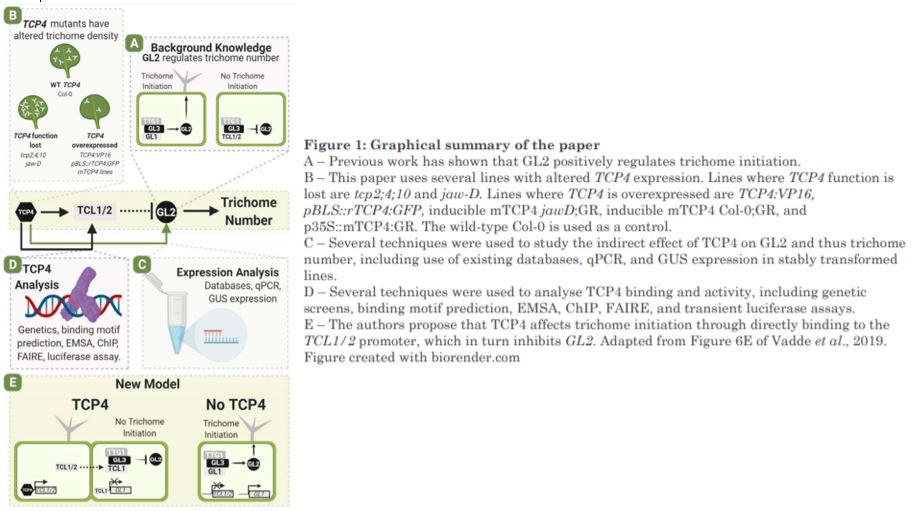 To better understand trichome development, we must understand two core processes: trichome patterning (or the fate determination of progenitor cells), and trichome differentiation, both of which have been most studied in Arabidopsis thaliana. The decision to adopt a trichome or other epidermal cell identity is regulated antagonistically by two protein complexes termed the initiator complex and the inhibitor complex (Figure 1A). The initiator complex consists of GLABRA1 (GL1), GLABRA3 (GL3) or ENHANCER OF GL3 (EGL3), and TRANSPARENT TESTA GLABRA1 (TTG1) (reviewed in Pattanaik et al., 2014). This initiator complex activates expression of GLABRA2 (GL2), whose transcription factor product initiates trichome morphogenesis (Szymanski et al., 1998). Replacement of GL1 by an inhibitor renders the complex unable to activate GL2 expression, preventing trichome morphogenesis. While the expression of most trichome inhibitors is regulated by the initiator complex, a small number are not, including TRICHOMELESS1 and 2 (TCL1 and TCL2). To date, the roles of TCL1 and TCL2 in trichome development in leaves have not been extensively studied, and their upstream regulators in this early stage of development are unknown.

In this issue of Plant Physiology, Vadde et al., 2019, from the Indian Institute of Science, present their comprehensive characterisation of the role of a class II TCP (a family named after the first four studied members: TEOSINTE BRANCHED1 (TB1; Zea mays), CYCLOIDIA (CYC; Antirrhinum majus) and PROLIFERATING CELL NUCLEAR ANTIGEN FACTOR1/2 (PCF1/2; Oryza sativa)) in the regulation of TCL1 and TCL2, and therefore its role in trichome development on Arabidopsis thaliana leaves. The authors hypothesised that upstream regulators of TCL1 and TCL2 would be transcription factors present for the duration of leaf morphogenesis. The TCPs are a family of plant-specific transcription factors that can be split broadly into two classes, which act antagonistically to promote (class I) or repress (class II) cell proliferation (reviewed in Martín-Trillo and Cubas, 2010). TCPs are known to regulate several developmental processes, including leaf shape determination, petal and stamen development, and circadian clock function (Li, 2015). In addition, TCP expression overlaps both temporally and spatially with factors involved in trichome initiation, making them a potential candidate in this process.

Plants with TCP4 (a class II TCP) gain-of-function have previously been observed to have fewer trichomes on their leaf surfaces compared to wild-type plants (Efroni et al., 2008). Vadde and colleagues confirmed this observation through examining two TCP4 gain-of-function mutants: TCP4:VP16, in which TCP4 is fused to a viral activation domain; and pBLS::rTCP4:GFP, which expresses a miR319-resistant form of TCP4 fused to GFP under an early leaf-specific promoter. Both plant lines showed reduced trichome density compared to the wild-type. Conversely, two TCP4 loss-of-function lines, the triple mutant tcp2 tcp4 tcp10 and jawD (an over-expressor of miR319, whose targets include class II TCPs TCP2, TCP3, TCP4, TCP10, and TCP24), displayed an increased trichome density compared to the wild type (Figure 1B).

Publicly available gene expression data show that positive regulators of trichome initiation GL1 and GL2 are significantly up-regulated in TCP loss-of-function mutants and vice-versa in gain-of-function mutants. This was validated by Vadde and colleagues by qPCR time-course experiments and GUS assays (Figure 1C), demonstrating that TCP4 suppresses the expression of these two genes. As the class II TCPs are transcriptional activators, it was hypothesised that this down-regulation of GL1 and GL2 by TCP4 is an indirect effect.

To identify which genes act downstream of TCP4 in GL2 transcriptional regulation, transcript levels of known trichome initiator and trichome inhibitor complex genes were compared between a TCP4 gain-of-function line and the wild type. Four genes, TCL1, TCL2, ENHANCER OF TRY AND CPC2 (ETC2), and ETC3, were up-regulated in the TCP4 gain-of-function line. Comparison to microarray data previously produced in the Nath lab revealed that only TCL1 and TCL2 are activated soon after TCP4 induction (Challa et al., 2016). TCL1 and TCL2 activation is associated with down-regulation of GL1, supporting the model that TCP4 prevents trichome morphogenesis via activation of TCL1 and TCL2, which constitute part of the trichome inhibition complex.

Vadde and colleagues go on to show that TCP4 directly targets TCL1 and TCL2. In the absence of protein synthesis, induction of TCP4 increased TCL1 and TCL2 transcript levels by at least 2-fold. Putative TCP4 binding sites were identified in the regulatory regions of both TCL1 and TCL2. These in silico predictions were verified by in vitro electrophoretic mobility shift assays (EMSAs), which demonstrated that TCP4 binds specifically to these sequence motifs, and chromatin immuno-precipitation (ChIP) showed that TCP4 is recruited to these sites in the genome. Formaldehyde-assisted isolation of regulatory element (FAIRE) assays confirmed that the presence of TCP4 increases chromatin accessibility in the promoters of TCP1 and TCP2. Furthermore, an in vivo luciferase assay in isolated protoplasts and an in planta GUS assay both confirmed that TCP4 binds to and activates the TCL1/2 genes, supporting the model that trichome morphogenesis is inhibited by TCP4 through direct activation of TCL1 and 2 (Figure 1D).

Further genetic experiments showed that TCL1 is required for the reduction in trichome number observed in the leaves of TCP4 overexpression lines. Here, examination of trichomes on the inflorescence stems and older leaves could have been included to determine whether TCP4 regulation of TCL1 is restricted to young leaves or is ubiquitous throughout plant development.

The thorough work presented in this paper is an important step forward in our understanding of trichome development, summarised in Figure 1E. For the first time, an upstream transcription factor controlling inhibitory regulators of trichome morphogenesis in leaves has been identified. Excitingly, TCP4 is also implicated in repression of cell proliferation (Schommer et al., 2014) and in fundamental leaf patterning (Koyama et al., 2017), and thus may play an important role in the co-ordination of development. As there is some degree of functional redundancy within the TCP family (Danisman et al., 2013), whether further TCPs are involved in trichome initiation and patterning must await further study. TCPs are ubiquitous across plant species; thus, advances in our understanding of their role in co-ordinating development will also be beneficial when considering economically important crop species.

The Evening Complex of the Circadian Clock and Chromatin 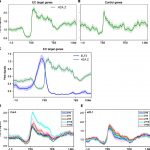 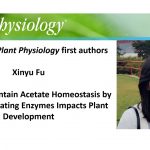