Among cereal crops, barley (Hordeum vulgare) is the most salt-tolerant species and is widely used for salt-tolerance studies. Recently, a genome-wide 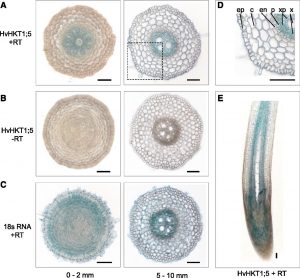 association study on 2,671 barley genotypes showed that single nucleotide polymorphisms from HvHKT1;5, a member of the high-affinity K+ transporter (HKT) family were associated with increased salt tolerance. It is well known that a Ser/Gly residue in the first selectivity pore-forming region (P-loop) is crucial for cation selectivity and subfamily features: the HKT subfamily 1 has a Ser residue in the first P-loop region, which is considered to be associated with specific Na+ transport. The exact function of HvHKT1;5, however, remains to be elucidated.  Huang et al. (10.1104/pp.19.00882) now establish that HvHKT1;5 negatively regulates salt tolerance in barley and has different functions from its homologs in other cereal crops. HvHKT1;5 encodes a plasma membrane protein localized to root stele cells, particularly in xylem parenchyma cells adjacent to the xylem vessels. Its expression was highly induced by salt stress. The heterogenous expression of HvHKT1;5 in Xenopus laevis oocytes revealed that HvHKT1;5 was permeable to Na+, but not to K+, although its Na+ transport activity was inhibited by external K+. HvHKT1;5 knockdown barley lines showed improved salt tolerance, a dramatic decrease in Na+ translocation from roots to shoots and increases in K+/Na+ when compared with wild-type plants under salt stress. The negative regulation of HvHKT1;5 in salt tolerance distinguishes it from other HKT1;5 members, indicating that barley has a distinct Na+ transport system. These findings provide a deeper understanding of the functions of HKT family members and the regulation of HvHKT1;5 in improving salt tolerance of barley.

Insights into the Evolution of C4 Photosynthesis in the Grasses 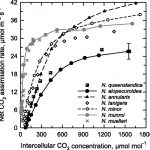 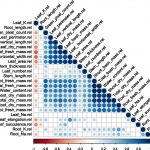