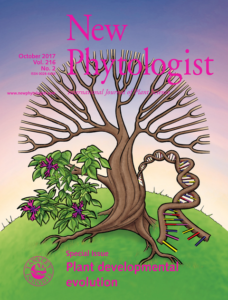 This issue is rooted in the 37th New Phytologist Symposium on ‘Plant developmental evolution’, 2016, that gathered researchers working on the developing field of plant evo-devo. The issue is a wonderful compendium of work presented during the symposium and the contribution of other researchers working in the field. The papers discuss and present work that sheds light on the molecular mechanisms involved in development and the evolution of new traits, from leaf and flower morphologies, to vasculature and other plant tissues of early plants. For proper organ development, cells gain their identity early on, commanded by several genetic networks. The environment in which plants find themselves also has a say—plant-environment interactions can determine developmental and physiological responses within their lifetime and across generations. How plants get to those environments is also relevant as they could evolve mechanisms that let them reach long distances by themselves or with the help (and sometimes manipulating the attraction) of diverse pollinators. In the end, the final goal for plants would be to adapt their life cycles to selective environments, and we still need more information to finally disentangle the evolutionary mechanisms involved. (Summary by Gaby Auge). New Phytol.  Volume 216, Issue 2. 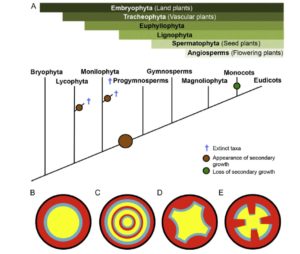 Secondary growth from the vascular cambium, a lateral meristem, increases the plant’s girth. It also produces wood (secondary xylem) and important fibers like flax, jute and hemp (secondary phloem). Ragni and Greb review secondary growth in plants. They start with a review of the evolutionary history of secondary growth (which includes both gains and losses), and describe cambial oddities. They then summarize our understanding of cambium initiation and proliferation, and production of tissues derived from cambium. They also describe the roles of genes identified initially from studies of primary meristems (e.g., CLV1, WUS, KNOX) on control of cambium activities.  Semin. Cell Dev. Biol. 10.1016/j.semcdb.2017.08.050 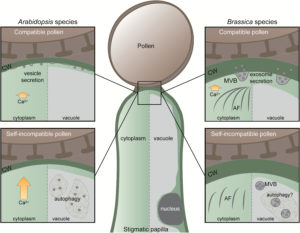 Some plants are able to suppress inbreeding through a system called self-incompatibility, in which “self”-pollen is unable to reach “self” eggs. Self-incompatibility has evolved multiple times and takes several forms. Goring reviews the cellular processes of self-incompatibility that occur in Brassicaseae in pollen-stigma interactions, the “first checkpoint in pollen selection”. Pollen coat proteins are involved in the recognition of compatible or incompatible pollen. Compatible pollen stimulates secretion from stigmatic papillae, which also involves changes in the actin cytoskeleton and calcium ion fluxes, making this system a useful model for studies of polarized secrection. J. Exp. Bot. 10.1093/jxb/erx340 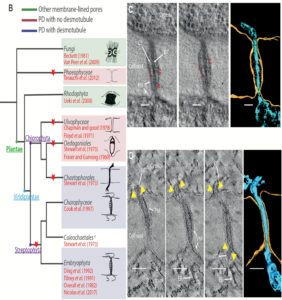 Plasmodesmata are tiny channels between cells that allow intercellular movement of messages and metabolites as well as pathogens. They are structurally complex and usually have a central strand of endoplasmic-reticulum (the desmotubule) that passes between adjacent cells, connected by spoke-like elements to the plasma membranes that line the channel. Nicolas et al. speculate on how the structure of plasmodesmata affects their function, and whether they can be considered a specialized form of membrane contact site (a transfer point between membranes of two cellular compartments, with one typically being the ER). From this perspective, they then further ask about the identity of the spoke-like elements and the role of membrane microdomains in plasmodesmatal functions. J. Exp. Bot. 10.1093/jxb/erx225 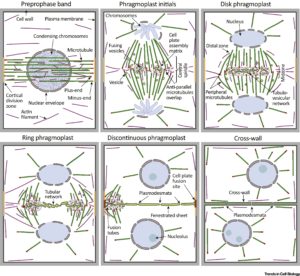 Cell division in plants is a structurally beautiful process that involves striking and dynamic changes in the cytoskeleton, endomembranes, and nucleus. However, as authors Smertenko et al. observe, “Current plant cytokinesis terminology was developed using data generated by fluorescence microscopy of live or fixed cells, electron microscopy of chemically or cryofixed cells, and genetic strategies,” so some structures and processes have multiple names. In this Opinion article, the authors (a who’s who of plant cell biologists) propose a new, standardized terminology. Furthermore, in introducing this terminology, the article provides a nice overview of the process of cytokinesis in plant cells.  Trends Plant Sci. 10.1016/j.tcb.2017.08.008 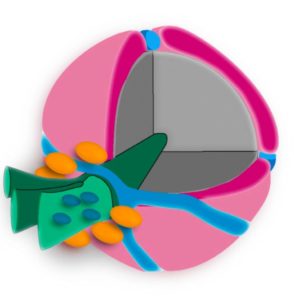 Photosynthesis in aquatic organisms is made difficult due to the low solubility of CO2 in water. Algae such as Chlamydomonas rheinhardtii overcome this limitation through a carbon-concentrating organelle called a pyrenoid. Two papers in Cell redefine our understanding of the pyrenoid structure. Mackinder et al. (10.1016/j.cell.2017.08.044) tagged pyrenoid-localized proteins and examined their locations as well as their interactions. Their study revealed new insights and additional complexity to the pyrenoid structure including the presence of at least four distinct outer protein layers, and the surprising finding of a carbonic anhydrase localized to the flagella, where it might aid in chemotaxis towards HCO3–. Using cryo-electron tomography (a method that was the subject of the Nobel Prize in Chemistry this week) and FRAP (fluorescence recovery after photobleaching), Freeman Rosenzweig et al. (10.1016/j.cell.2017.08.008) showed that rather than being crystalline-like, the Rubisco-rich pyrenoid matrix is instead liquid-like, which may better enable its sequestration into two daughter cells during cell division. Cell. (Even if you don’t have time to read the papers, check out this cool movie). 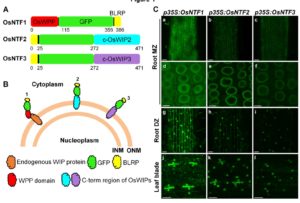 Reynoso et al. describe the Isolation of Nuclei from TAgged specific Cell Types (INTACT) in rice. In this method, modified from one described previously in Arabidopsis and tomato, nuclei are labeled with a biotinylated nuclear-envelope anchored protein. Best results were obtained when a rice WIP (WPP-Interacting protein) was fused to GFP and BLRP (biotin ligase target peptide). The protein is biotinylated at the outer surface of the nucleus through a second transgene encoding biotin ligase. Biotin-labeled nuclei are then purified through the use of streptavidin-coated beads. The purified nuclei are sources of nuclear RNA and proteins for studies of gene regulation. Plant Physiol. 10.1104/pp.17.00688 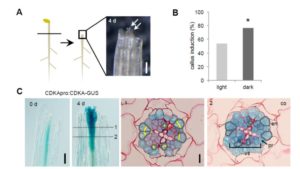 Plants are known for their ability to regenerate tissues following wounding. Wound repair requires the induction of cell proliferation, leading to the formation of undifferentiated callus at the wound site, followed by cell differentiation. Ikeuchi et al. explored transcriptional changes following wounding damage to the hypocotyl, and through mutant analysis and measurement of hormones evaluated the contributions of hormones to wound repair. The authors identified a key role for cytokinins and a set of wound-induced transcription factors in callus formation. Plant Physiol. 10.1104/pp.17.01035 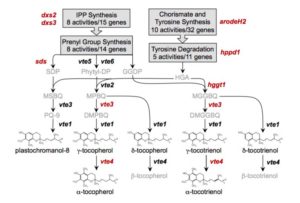 Vitamin E (alpha-tocopherol and related tocochromanol compounds) is a lipid-soluble antioxidant that contributes to numerous cellular activities and confers protection against many diseases, from cancer to cardiovascular disease. The main sources of vitamin E for humans are plant oils, but most crop seeds produce tocopherols with only low vitamin E activity. The biosynthetic pathway of tocochromanols is fully known for Arabidopsis.  Diepenbrock et al. took advantage of existing genetic tools (including recombinant inbred lines and HapMap sequence variants) to identify genes responsible for natural genetic variation in maize.  They identified 14 genes associated with natural variation for tocochromanols, of which six had not previously been identified as affecting tocochromanols in any plant species. These findings provide new insights into the biosynthesis of these compounds, and provide tools for breeding and engineering of vitamin E in crops. Plant Cell 10.1105/tpc.17.00475 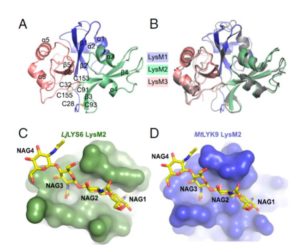 Small molecules are crucial for the recognition of friends and foes. For example, Nod factors are N-acetylglucosamine-derived “friend” signals produced by bacterial microsymbionts. Chitin is an N-acetylglucosamine-derived fungal wall polymer that plants perceive as indicating the presence of an enemy.  The question of how plants perceive their friends and enemies became even more perplexing when it was recognized that Nod factors and chitin are recognized by closely-related lysine-motif (LysM) receptors. Bozsoki et al. used two model legumes, Lotus japonicus and Medicago truncatula to dissect the functions of different LsyM receptors. They showed that LjLYS6 binds with high affinity to chitin oligomers, whereas previous studies showed high-affinity binding of LjNFR1 and LjNFR5 to Nod factors. They further showed that mutants of Ljlys6 and its ortholog Mtlyk9 are impaired in defense responses, but showed no difference from wild-type in symbiosis phenotypes. These data indicate that although related, different LysM genes have fundamentally different roles in friend-versus-foe recognition. Proc. Natl. Acad. Sci. USA 10.1073/pnas.1706795114 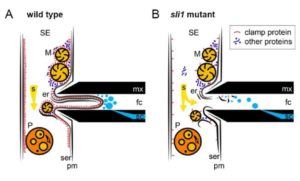 Aphids are major pests that damage plants by sucking out phloem sap and as by acting as vectors in transmission of more than 300 different viruses. Kloth et al. used a high-throughput method involving video-tracking of aphid behavior on leaf discs to score 350 Arabidopsis accessions for aphid resistance. They then used genome-wide association mapping to identify a gene that affects aphid feeding behavior. SLI1 encodes a small heat-shock protein of unknown function.  Expression of SLI1 is negatively correlated with the duration of phloem feeding, indicating that it has a resistance effect. The authors propose that SLI1 restricts phloem sap flow (and feeding) by increasing the firmness and thickness of the parietal layer between the ER and the plasma membrane.  SLI1 also enhances heat tolerance. Plant Cell 10.1105/tpc.16.00424 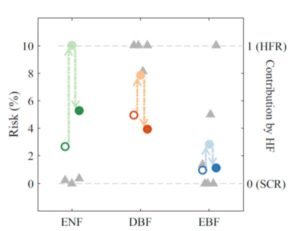 Liu et al. used models to predict the effects of climate change on tree mortality in 13 temperate and tropical forest biomes across the globe. When only increased temperature and changes in precipitation are considered, mortality increases in most biomes, with higher emissions models leading to increased mortality. However, when increases in CO2 concentration are included in the models, some or most of the increased mortality is alleviated for most of the biomes, with the exception of needle-leaf forests which will suffer increased mortality in all models. Interestingly, the authors also investigated the origins of tree mortality, and concluded that in some biomes the trees are likely to die due to hydraulic failure, and in others due to inadequate CO2 uptake (as a consequence of excessive stomatal closure) leading to carbon limitation. Proc. Natl. Acad. Sci. USA  10.1073/pnas.1704811114 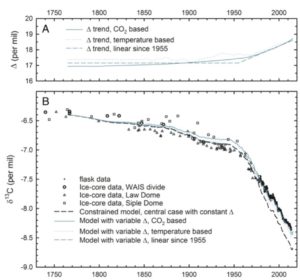 Carbon exist in two stable isotopic forms; 99% as 12C and 1% as 13C. The carbon-fixing enzyme Rubisco preferentially fixes 12C, so fossil fuels are enriched for 12C, and since the industrial revolution the atmospheric 13C / 12C ratio has been increasing as the 12C-enriched fossil fuels are reconverted to CO2. Interestingly, measured data do not match the expected change in 13C / 12C ratio, indicating that some other unaccounted for factor is also affecting it. Keeling et al. looked at various models to identify the source of the unexpected ratio, and determined that it results from an increase in the discrimination between 13C / 12C that is occurring due to increased atmospheric CO2. Their findings indicate that, “at the global scale,  land plants have regulated their stomatal conductance so as to allow the CO2 partial pressure within stomatal cavities and their intrinsic water use efficiency to increase in nearly constant proportion to the rise in atmospheric CO2 concentration.” Proc. Natl. Acad. Sci. USA  10.1073/pnas.1619240114 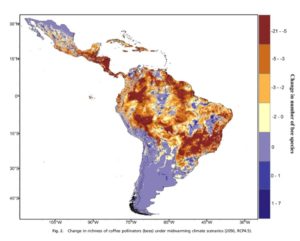 With changing climate, crops may need to be relocated to new regions for optimal growth temperatures or precipitation, but temperature and rainfall are not the sole influencers of productivity. Many crops, including coffee, depend on pollinators, which may or may not be available in other regions. Imbach et al. modelled future projections for both coffee-suitable and bee-suitable regions. Their results showed large decreases in coffee-suitable regions by 2050. They found that some future coffee-suitable regions will show an increase in bee richness and many others will show a decrease, although all are expected to sustain at least five bee species. This study highlights the need to assess coupled effects of climate change on crops and their pollinators, especially for planning future land use practices. Proc. Natl. Acad. Sci. USA 10.1073/pnas.1617940114.