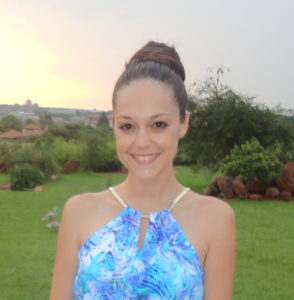 Danielle is a PhD candidate in the Forest Molecular Genetics (FMG) Programme at the University of Pretoria, South Africa. She has been a Plantae Fellow since September 2017, having joined after attending her first ASPB Plant Biology meeting. Danielle is a plant geneticist, and her research focuses on the evolution and development of xylogenesis in the land plants, with a special focus on the underrepresented land plant lineages.

Review: Organization out of disorder – liquid-liquid phase separation in plants 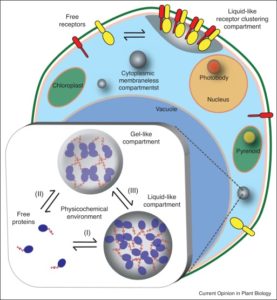 Within cells there are vast numbers of different activities and processes occurring simultaneously. In eukaryotic cells, some of these processes are segregated into distinct membrane-bound compartments. Cuevas-Velazquez and Dinneny review how membraneless compartments also contribute to subcellular organization, with a focus on those predominantly found in the green lineage including pyrenoids and photobodies. The authors describes current understanding of how these membraneless compartments organize, their physical properties, and their molecular components. They also summarize the contribution of low complexity sequence domains (LCDs), features of intrinsically disordered proteins such as the LEA hydrophilins, in the formation and functioning of membraneless compartments and their potential role in stress responses. (Summary by Mary Williams) Curr. Opin. Plant Biol. 10.1016/j.pbi.2018.05.005

Roles of AGCVIII kinases in the hypocotyl phototropism of Arabidopsis seedlings 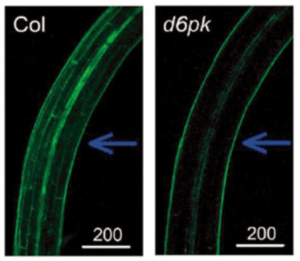 Phosphorylation and de-phosphorylation are fundamental events for signal transduction. Phytohormone and light signaling are no exception in this case. Plants face towards light by creating lateral auxin gradient between exposed and shaded sides. This asymmetric auxin distribution is mediated through auxin transporter PIN-FORMED (PIN) proteins. One possible mechanism is the regulation of PIN protein through phosphorylation. In this study, they have studied AGCVIII kinase family (D6PK, phots, PID), known to regulate auxin transport activity via PIN phosphorylation. They have demonstrated that D6PK (D6 PROTEIN KINASEs) plays critical role in hypocotyl phototropism. Additionally, AGC1-12, another AGCVIII kinase, phosphorylates serine residues of PIN1 at hydrophilic loops and it shares the preferred phosphorylation site with D6PK. Taken together, D6PK and AGC1-12 play functionally important role for maintaining both phototropism and gravitropism in the hypocotyl by regulating PIN-mediated auxin transport. (Summary by Arif Ashraf) Plant Cell Physiol. 10.1093/pcp/pcy048 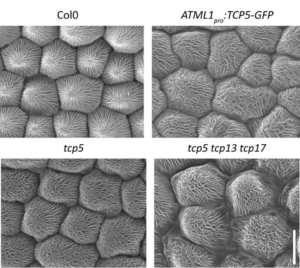 The flower is one of the most important organs of a plant as it provides fruits and seeds. Due to its economic value, flowers are studied extensively to understand its developmental process. Based on the popular ABC model of flower development, floral organ development is mostly regulated through the interaction of MADS box family of transcription factors (TFs). In this paper, they have studied the function of TCP5-like TFs is petal development. Triple knock out mutants (tcp5 tcp13 tcp17) result in wider petals and overexpression of TCP5 shows smaller petal size. Gene expression analysis suggests that ethylene biosynthesis and signaling are involved in this process. They have demonstrated that TCP5 as TF binds to the ACS2 promoter and ethylene pathway inhibitor was able to recover triple knockout phenotype. Altogether, this study suggests the function of TCP5 in ethylene-mediated regulation of petal growth. (Summary by Arif Ashraf) Plant J. 10.1111/tpj.13904

Discarding unwanted organs is a highly regulated process in plants 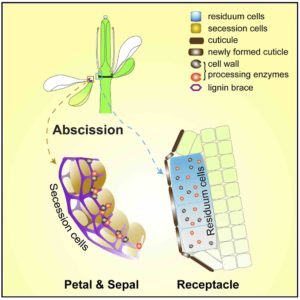 Plants frequently, seasonally, discard unwanted organs (termed abscission), which include dead leaves, flowers and ripe fruit. Abscission requires tight control to avoid exposure to biotic and abiotic factors, which can lead to tissue damage or infection. Due to the presence of the cell wall, plant cells are tightly linked together, and cell migration is not possible, which is in contrast to the wound healing mechanisms in animals. The cell wall, therefore, needs to undergo specific chemical changes and modifications to enable safe abscission. Recently, Lee et al (2018) demonstrated that two neighbouring cell layers in the Arabidopsis thaliana flower abscission zone have distinct and coordinated activities that allow for precise abscission of plant organs. The cell layer that remains attached to the plant (residuum cells or RECs) undergoes transdifferentiation to become epidermal cells, the only known time when non-epidermal cells become epidermis de novo after embryogenesis, while the cell layer that separates from the plant body (secession cells or SECs) develops a honeycomb structure of lignin that allows for cell wall hydrolysing enzymes to be localised and restricted only to the region being separated. These findings significantly enhance our understanding of the abscission process in plants, and the authors believe their work will contribute to improved crop and fruit production strategies. (Summary by Danielle Roodt Prinsloo) Cell 10.1016/j.cell.2018.03.060 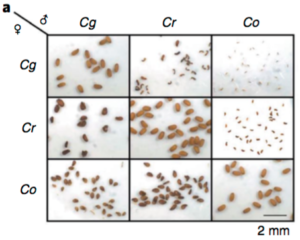 Hybrid seed lethality represents a major reproductive barrier in angiosperms and facilitates species divergence over evolutionary times. Hybrid seed lethality is mainly due to defective endosperm development, leading to embryo arrest. Hybrid seed defects show a parent-of-origin effect, but the underlying molecular mechanisms remain elusive. In this study, Lafon-Placette et al. assessed the contribution of parentally imprinted genes to hybrid seed lethality using interspecific crosses between three species from the genus Capsella. They first evaluated the hybridization barrier between the species and confirmed that the observed seed lethality is due to endosperm failure. Transcriptome analyses revealed that species-specific paternally expressed imprinted genes (PEGs) were deregulated in hybrid seeds, suggesting that dosage imbalance from PEGs could be a major cause of hybridization failure. They further show that species-specific PEGs are preferentially found in the vicinity of transposable elements and exhibit higher DNA methylation, suggesting that inter-species variation in transposable elements contributed to imprinted genes divergence between Capsella species. Together, this study reveals a major contribution of imprinted genes to hybridization barriers, fuelled by polymorphisms in transposable elements, and provides a framework for prediction of hybridization success. (Summary by Matthias Benoit) Nat. Plants 10.1038/s41477-018-0161-6 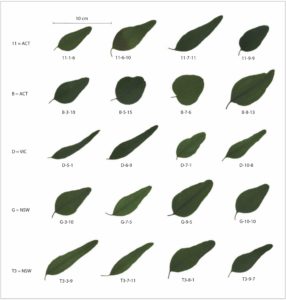 Yellow box, Eucalyptus melliodora, is an iconic Australian tree and foundation species of a critically endangered woodland community that is the target for restoration efforts. This community is currently severely fragmented, and less that 5 % of its original distribution remains. Models of climate prediction and other environmental changes can and should be used in seed sourcing to increase the chance of successful restoration and the long-term survival of restored communities. For yellow box, for example, an ecological niche model predicted that by 2090 suitable areas for this species will have decreased by 77 % due to environmental change (Broadhurst et al, 2018). Applying appropriate seed sourcing strategies can aid in identifying suitable variation able to survive and thrive in predicted future environments. Recently, Supple et al (2018) developed a landscape genomic model to assist in building resilient populations of this foundation species. They found that gene-flow extends as far as 500 km, and observed that great phenotypic variation exists between sampling sites, which indicates that seeds can be sourced broadly to ensure for greater genetic diversity. Combining environmental, genomic and ecological knowledge of especially foundation species will greatly enhance the probability for successful restoration projects in changing environments. (Summary by Danielle Roodt Prinsloo) eLIFE 10.7554/eLife.31835 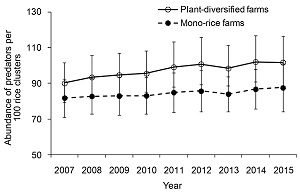 As more people move to cities, urban agriculture will make larger contributions to food security. There has been little investigation on the role of plant biodiversity in urban agricultural systems. Wan and colleagues use monitoring data collected from community farms in Shanghai, China, to investigate the role of border and neighboring crops on rice production. Border crops (soybeans) and neighboring crops (maize, eggplant and Chinese cabbage) increased the abundance of invertebrate predators, which decreased pest abundance. This caused a decrease in insecticide use as well. There was an overall increase in rice grain yield and economic profits. Randomized experiments of low and high plant diversity practices confirmed the monitoring data results. Diversifying urban agriculture through the use of diverse broader and neighboring crops helps to decrease pests and increase yields. (Summary by Julia Miller) eLIFE 10.7554/eLife.35103

Review: Organization out of disorder – liquid-liquid phase separation in plants...
Scroll to top