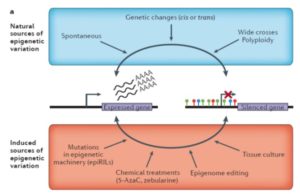 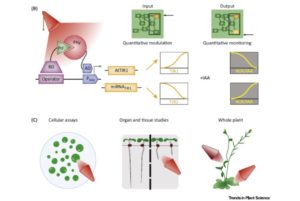 Samodelov and Zurbriggen describe approaches to exquisitely fine-tune protein and metabolite expression levels through a variety of synthetic and semi-synthetic biology approaches. For example, optigenetics tools enable gene expression to be activated precisely via a light beam; when combined with downstream regulators including miRNAs and inducible protein degradation tags, the gene product can be reliably switched off as well as on. Similarly, the authors review efforts to use synthetic biology to optimize biosensors (transcriptional, degron, or FRET based) that read out spatially resolved and quantitatively sensitive levels of hormones or metabolites, as well as efforts to mathematically model plant processes based on the collected data. One of the outstanding questions raised by the authors is “How can the novel theoretical–experimental concepts of synthetic and quantitative plant biology best be incorporated into teaching curricula to prepare future generations of plant researchers for the challenges ahead?” – this review is a good place to start. Trends Plant Sci. 10.1016/j.tplants.2017.05.006 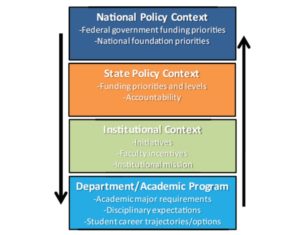 A new report (free to download) from the National Academies, edited by Gentile et al., provides insights into how undergraduate research experiences (UREs) enhance and support undergraduate education, whether they are faculty-mentored lab or field-based research or research embedded in a course. This report describes many forms of URE with recommendations for how to design and assess them. It further elaborates on the role of funding agencies and national policies, and addresses the needs and benefits of UREs for both students and faculty. National Academies Press 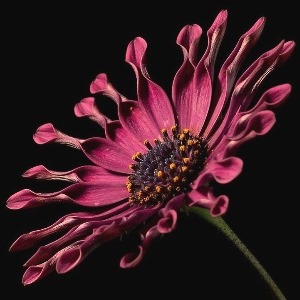 The current issue of Genome Biology features a collection of review and research articles on the topic of plant epigenomics, with an overview editorial by Köhler and Springer. This collection “highlights advances in our understanding of the functions of epigenetic modifications, and the application of this knowledge.” Topics include how chromatin marks contribute to stress responses and flowering, retrotransposon mobilization, and the effects of hybridization and polyploidization on epigenomics. As the editors say, “we look forward to seeing these discoveries being translated into practical applications of benefit for breeders and consumers.” 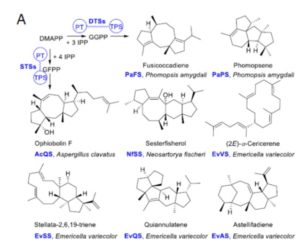 Sesterterpenes are a family of natural products; some (derived from corals and fungi) have been shown to have antitumor, antimicrobial and antiinflamatrory activities. Huang et al. used genome mining to identify sesterterpene biosynthetic genes in the Brassicaceae. The first committed step is carried out in fungi by a bifunctional enzyme, but by two enzymes in plants. Function of the plant genes was confirmed by transient expression studies in Nicotiana benthamiana. This study provides a foundation for further studies of plant sesterterpenes. Proc. Natl. Acad. Sci. USA 10.1073/pnas.1705567114 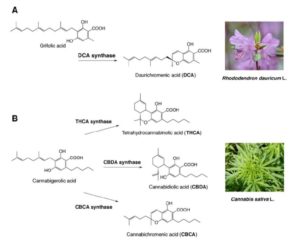 Daurichromenic 1 acid (DCA) is a meroterpenoid with anti-HIV properties that is produced in young leaves of Rhododendron dauicum. In this study, Iijimi et al. identified a DCA synthase gene. Starting with their previous observations that this enzyme is a stereoselective meroterpenoid oxidocyclase, similar to cannabinoid synthases of Cannabis sativa, the authors looked in a transcriptome database from Rhododendron dauicum for cDNAs encoding cannabinoid-synthase-like proteins. When candidate cDNAs were expressed in a heterologous system (Pichia pastoris), the recombinant enzyme showed DCA synthase activity. The identification of the DCA synthase gene provides an opportunity for semi-synthetic production of this anti-HIV natural product. Plant Physiol. 10.1104/pp.17.00586 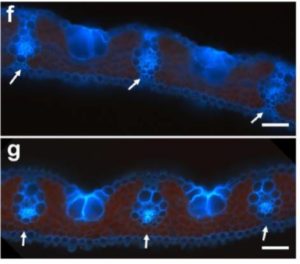 Most plants that use the more efficient C4 form of photosynthesis also exhibit Kranz anatomy, in which the PEPC and Rubisco carboxylases reside in distinct cells. Key genes that control the development of Kranz anatomy have been hard to find. In this report, Wang et al. analysed the effects of constitutively expressing in rice candidate Kranz-regulatory maize genes (36 encoding transcription factors, 14 encoding leucine-rich repeat receptor like kinases, and 10 encoding other putative regulatory functions). Most (47) of the genes tested showed no clear phenotypic effect. Others affected shoot and /or root growth, in some cases through what appear to be effects on hormone responses, whereas in others through changes in cell wall deposition. Future work includes refining the expression of some of these genes through cell-specific or inducible promoters. Sci. Reports 10.1038/s41598-017-04361-w 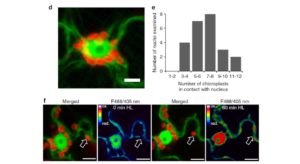 Because most chloroplast proteins are encoded in the nuclear genome, there must be ways for signals from the chloroplast to inform the nucleus and direct changes in gene expression. Several candidates have been proposed as chloroplast-to-nucleus (retrograde) signals. Using hydrogen-peroxide (H2O2) specific sensors, Exposito-Rodriguez et al. show that upon illumination with high light, hydrogen peroxide produced in the stroma of chloroplasts located near the nucleus appears to be transferred to the nucleus. They were able to block nuclear H2O2 accumulation by expressing ascorbate peroxidase (a hydrogen peroxide detoxifier) in the chloroplast stroma, but not when APX was expressed in the cytosol, suggesting that the H2O2 moves directly from the chloroplast to the nucleus, and could serve as a rapid and specific retrograde signal of high light.  Nature Comms. 10.1038/s41467-017-00074-w 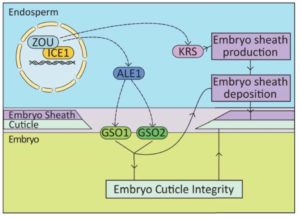 Following double fertilization, the embryo and the endosperm form within a developing seed. In Arabidopsis, the endosperm is somewhat transient, as most of the space it occupies is eventually taken over by the embryo. The question of how the embryo pushes aside the endosperm has not been fully clear. Previous studies showed that the surface of developing embryo incorporates an epitope recognized by the monoclonal antibody JIM12. Moussuet et al. observed that this epitope is lacking in zou mutants of the transcription factor ZHOUPI, and that the endosperm sticks to the embryo, and that zou mutants are lacking an extracellular layer over the embryo cuticle that they describe as the embryo sheath. Transcriptional targets of ZHOUPI include a gene encoding a Cys-rich peptide that they named KERBEROS “after the mythical guardian of the underworld who separates the dead from the living.” Sheath formation appears to be necessary for proper seperation of the embryo and endosperm. Plant Cell 10.1105/tpc.17.00016 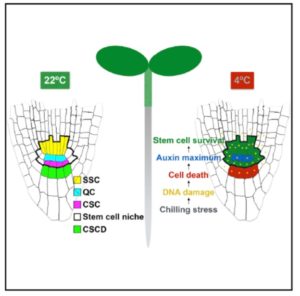 Chilling to 4° induces cell death in a subset of cells at the Arabidopsis root tip, the CSCDs (columella stem cell daughters, located just distal to the quiescent center). Hong et al. show that this cell death is dependent on cell division and that it is an active, programmed response. Blocking this cell death renders the root more sensitive to chilling; therefore these cells are sacrificed for the root’s survival. This response is auxin-mediated, and affects auxin transporters and auxin distribution. The authors show that CSCD death leads to the re-establishment of the auxin maximum in the quiescent center and protects the stem cells.  Cell  10.1016/j.cell.2017.06.002 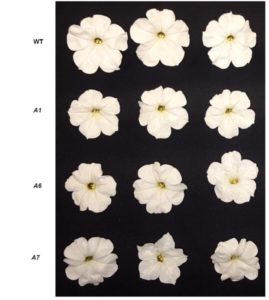 Plants can emit up to 10% of the carbon they fix as volatile organic compounds (VOCs), which function in abiotic stress tolerance, pollinator attraction, signalling between plants, and defending against pathogens and herbivores. It has been an open question whether these small molecules pass directly and passively through the plasma membrane or whether their transport is facilitated by proteins. Given that waxes are transported through ABC transporters, Adebesin et al. queried petunia petal RNA sequencing datasets for ABC transporters. They identified PhABCG1 which has expression patterns consistent with being involved in volatile transport; expression of the protein in cultured tobacco cells demonstrated that it can transport methylbenzoate and benzyl alcohol, two abundant petunia petal VOCs. Gene expression knock-down through RNAi decreased VOC emission from petunia petals, and the petals showed disruptions to the plasma membrane, presumably due to the accumulation of the VOCs within the cell. The extent to which ABC transporters are involved in other plants and other VOCs remains to be seen.  Science 10.1126/science.aan0826 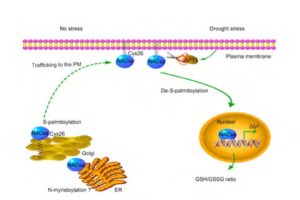 Regulation of transcription factor (TF) localization is a common strategy for gene expression regulation. Wang et al. identified  a membrane-anchored TF, MfNACsa, as contributing to drought stress responses. In unstressed plants, MfNACsa is anchored to the plasma membrane through covalent-attachment of a palmitic group (a fatty acid) to a cysteine (known as S-palmitoylation). Upon drought stress, MfNACsa is de-S-palmitoylated by a thio-esterase, permitting its translocation to the nucleus. There, it induces expression of stress-responsive genes including Gly1, which is involved in glutathione homeostasis during drought. Plant Cell 10.1105/tpc.17.00044 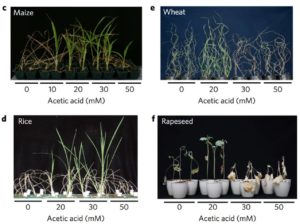 Kim et al. explored the molecular basis for the drought tolerance previously observed for mutants of histone deacetylase HDA6. They observed that genes involved in acetate production are upregulated in hda6 mutants and in drought-stressed plants. Furthermore, acetate biosynthesis mutants are more sensitive to drought, indicating a role for acetate in drought tolerance. Finally, they showed that applying low concentrations of acetic acid to various plants enhanced their tolerance to drought. Their data suggest that this effect is mediated through the jasmonic acid signaling network. Nature Plants 10.1038/nplants.2017.97 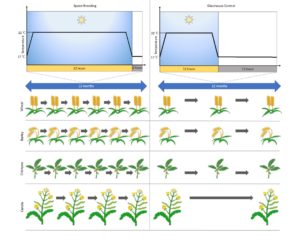 Watson and Ghosh et al. describe protocols to accelerate the lifecycle of several crop species using “speed breeding”, which essentially involves extending the daylength to 22 hours with supplemental lighting. They describe methods and results from glasshouse and growth chamber speed breeding. In spite of greatly shortened generation times, seed production was similar for the conventional and accelerated plants, making this a promising approach with which to develop new varieties. bioRxiv 10.1101/161182