This week’s edition is guest edited by Ian Street. Ian is a plant scientist, the writer and editor of The Quiet Branches Blog, The Resources Editor at The AoB Blog and an Associate Editor at The POSTDOCket and co-host of The Recovering Academic podcast. He can be found on Twitter @IHStreet.

Plant blindness and the implications for plant conservation 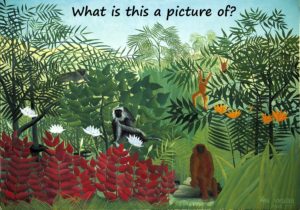 Plant Blindness negatively affects plant conservation, despite plants being a majority on the endangered species list. Balding and Williams review the research on plant blindness and argue that it isn’t inevitable. There are cultures in the world more keenly aware of plants than most in western societies whose minds focus more on animals. This bias extends to education where plants tend to be focused on less as well. Their prescribed solutions are getting people to identify, empathize, and appropriately anthropomorphize plants to bring more awareness to the plant world. Conservation Biology: 10.1111/cobi.12738 (OA for a limited time) 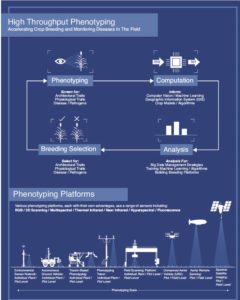 High throughput phenotyping (HTP) is a frontier in plant biology. Shakoor et al. review the state of HTP and various levels of implementation, current limitations, and the new horizons for the field. Envirotyping – getting all the information possible from an individual plant in a field to fully understand its context and phenotype – is a large-scale future goal in agricultural research. Monitoring via field sensors to satellite imaging to diagnose disease outbreaks and assess plant growth traits also strongly dovetails with Earth monitoring efforts of other scientists. Improving technologies show promise in stopping plant pathogens, predicting high-yielding genotypes early in a season, and more. However there are experimental design, data collection, analysis, and computing power issues to grapple with. Based on this review, scientists are doing just that. Curr. Opin. Plant Biol. 10.1016/j.pbi.2017.05.006   (Suggested by Jennifer Mach) 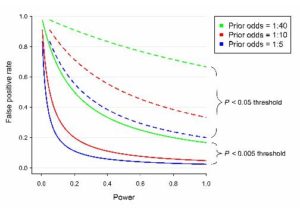 With data generation, high false positive rates, and inability to reproduce findings all on the rise in science, Benjamin et al. propose lowering the standard threshold of the p-value to 0.005. The p < 0.05 standard would be termed “suggestive” under this scheme. Some of the caveats are that this applies to new hypotheses, not the retesting of old hypotheses and obviously does not apply to fields where the standard is already under p < 0.005. It’s a good reminder to scientists to learn statistics and data analysis well. They do point out that this won’t necessarily solve all the issues science has, but is an accessible step. More on this pre-print was reported in Nature and Science. PsyArXiv Preprints 10.17605/OSF.IO/MKY9J (OA) 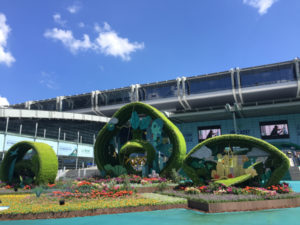 The International Botanical Congress was held in Shenzhen, China (#IBC2017) last week. The AoB Blog published several blog posts and tweet collections from the conference. The Congress also voted on The Shenzhen Declaration on Plant Science designed to unite plant scientists around several priorities and actions. Reviewing conference dispatches is a good way to take a quick look at what botanical colleagues are up to, get new ideas, or find a new collaboration across disciplines.  AoB Blog. (OA) 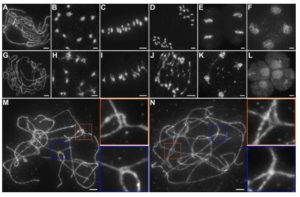 Hu et al. found a sterile rice mutant defective in meiosis. They mapped it to MEICA1, a widely conserved but uncharacterized protein required to ensure crossovers occur between allelic regions of chromosomes. It also inhibits allelic homologous recombination. This adds to a suite of proteins eukaryotic organisms have to maintain genome integrity and ensure proper chromosomal segregation during meiosis. With a combination of genetics, yeast-2-hybird assays, and gorgeous immuno-localisations, they determined at least some of the proteins MEICA1 interacts with and where it functions as cells undergo meiosis. Plant Cell 10.1105/tpc.17.00241 (OA)

With both biotic and abiotic stresses predicted to worsen due to climate change, the ideal crop of the future must have traits to handle both. Common abiotic stresses like drought, cold, and salinity cause osmotic stress by disrupting cell turgor. Exposure to a mild salt treatment leads some plants to acquire osmotic tolerance. Ariga et al. identify the ACQUIRED OSMOTOLERANCE (ACQOS) locus and show that osmotolerant A. thaliana accessions carry a deletion spanning ACQOS. Despite this positive effect on osmotolerance in its absence, phylogenetic analysis revealed widespread retention of ACQOS, leading to the hypothesis that having this gene can be advantageous. In fact, the authors demonstrate that plants retaining ACQOS are less able to suppress bacterial growth in response to flagellin. The environmental dependence of the effect of ACQOS is a beautiful illustration a trade-off between abiotic and biotic stressors. Nature Plants 10.1038/nplants.2017.72 (Contributed by Lyza). 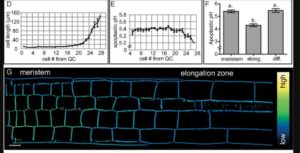 Barbez et al. introduce a fluorescent dye (8-hydroxypyrene-1,3,6-trisulfonic acid trisodium salt, HPTS) to track apoplastic pH in Arabidopsis roots and uncover some nuances in the auxin acid growth hypothesis. A sudden spike in auxin, perhaps counter-intuitively, causes a transient alkalization of the apoplast, preventing cell expansion. The mechanism may depend on the concentration of auxin, as has been observed before with lower concentrations of auxin stimulating growth and high concentrations inhibiting it. They also note that there is a biphasic role for auxin, where the initial alkalization abates and apoplastic pH becomes acidic in the presence of auxin, promoting cell expansion. HTPS has cellular resolution and pH in the meristem was observed to be high before becoming acidic in the elongation zone and rising again in the differentiation zone. PNAS 10.1073/pnas.1613499114 (OA) 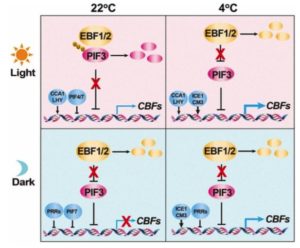 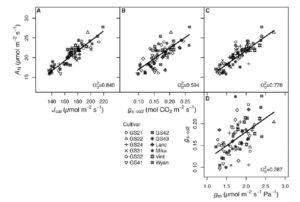 Boosting photosynthetic efficiency in crop species has long been a goal since efficiency of photosynthesis is a critical factor in crop yield. One strategy for improving photosynthetic rates is enhancing mesophyll conductance to carbon dioxide. Tomeo and  Rosenthal examined 12 cultivars of soybean (Glycine max) under both field and control conditions to examine differences in 20 different leaf structure and function traits. Under controlled conditions, cultivar variation did not have an impact on structural traits, but there were significant variations in a few physiological traits including electron transport rate, net assimilation rate, and mesophyll conductance. Mesophyll conductance had a strong positive correlation with photosynthetic yield, as well as, stomatal conductance and leaf mass per area. Using leaf mass per area as a selection factor has the potential for breeding soybean with greater photosynthetic efficiency; however, as stomatal conductance is also correlated with this trait there will be trade-off with water use efficiency that must be managed. Plant Physiol. 10.1104/pp.16.01940 (Contributed by Jen) (OA) 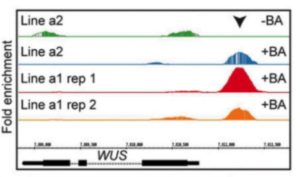 Cytokinin, one of the major plant hormones, is involved in many aspectis of plant growth and development. Over the last few decades, the biosynthetic and signaling pathways have been discovered. The mechanistic explanation to control a myriad array of gene expression is still a black box. Zubo et al. used a GFP tagged version of the transcription factor ARR10 (ARABIDOPSIS RESPONSE REGULATOR 10), one of the major cytokinin signaling components, to do genome-wide ChIP-seq analysis to identify cytokinin-regulated target genes involved in plant growth, development, and stresses. This ChIP-seq dataset will be a valuable resource to study hormonal cross talk, developmental mechanisms, and stress responses and mediated through cytokinin. PNAS 10.1073/pnas.1620749114 (Contributed by Arif)

Subfunctionalization of duplicated genes (ohnologs) is known to occur through eventual differential gene regulation/expression and sequence divergence. Winkler et al. explore the example of the negative regulators of auxin signaling, AUX/IAA proteins IAA6 and IAA19 and how their divergent structures in the ubiquitinated and unstructured regions flanking the domain II degron differs between the two proteins. It is also interesting that ubiquitination sites have a propensity to appear in unstructured regions of proteins. The structural differences lead to differential lysine ubiquitination and therefore different auxin responses, in degradation rate or signaling. These ohnolog differences lead to differing auxin level sensitivity and responses. Nature Comm. 10.1038/ncomms15706 (OA) 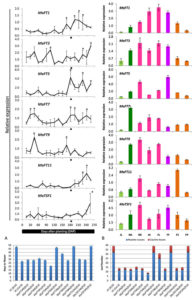 Flowering time is regulated by FLOWERING LOCUS T (FT), its paralog TWIN SISTER OF FT (TSF), and related proteins.  Banana (Musa spp.) is an economically-important day-neutral plant with a months-long vegetative phase prior to flowering.  The banana cultivar Grand Nain has 14 FT/TSF-like genes spread among its chromosomes.  Using qRT-PCR, expression of a subset of banana FT genes was shown to peak immediately prior to or during flowering.  Most banana FT/TSF-like genes also show a varying expression over a 24-hour period.  Nine FT/TSF-like genes can functionally complement the delayed flowering phenotype in the Arabidopsis ft-10 mutant.  Ten FT/TSF-like genes could also induce early flowering in wild-type Arabidopsis plants, which demonstrates conserved protein structure and function between banana and Arabidopsis.  This paper shows a path to manipulate flowering time in banana through its FT/TSF-like genes. (Summary by Daniel Czerny). Sci Reports 10.1038/s41598-017-06118-x (OA) 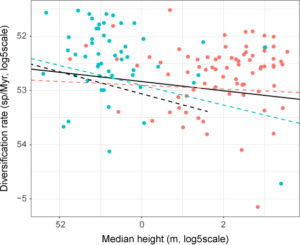 Diversification in plants is driven by many factors, but one trait, plant size, has been systematically overlooked, in contrast with the zoological field where the influence of body size on diversification has long been recognized. In this Viewpoint paper, Boucher et al. try to convince us why we should consider this trait. Using height as a proxy for plant size, the authors discuss how the characteristics of small plants might affect the rate and probability of speciation and extinction by processes like dispersal distance (with smaller plants dispersing seeds over shorter distances), fine-scale environmental perception (with smaller plants responding better to multiple fluctuating factors), population size and density (with stronger selection pressure on small plants and more effective transfer of pollen for outcrossing), and generation time (with smaller plants having shorter generation times). In addition, through a meta-analysis of a global database of plant traits, the authors show there is a negative correlation between plant height and diversification rates, mainly driven by families with species of shorter herbaceous plants. Altogether, they suggest that with all else being equal, small plants should have higher speciation rates and lower extinction rates than large plants, with the reduced scale for gene flow and stronger selection pressure accounting for higher speciation rates, and the higher population sizes accounting for the lower extinction rates. Thus, plant size should be considered when studying plant diversification and speciation. (Summary by Gaby Auge) New Phytol. doi: 10.1111/nph.14697

Plant size: a key determinant of diversification
Scroll to top