Editor-in-Chief Ivan Baxter introduces the new journal Plant Direct, “a new journal from Wiley and the societies behind Plant Physiology, The Plant Journal, and The Plant Cell” [that is, the American Society of Plant Biologists (ASPB) and Society for Experimental Biology (SEB)]. This new Open Access journal is a “sound science” journal, which means that manuscripts will be judged by “whether the experiments and analysis are performed to an acceptable technical standard and described in adequate detail in standard English, how well the conclusions are supported by the data, and whether the manuscript and contents meet all ethical and research integrity standards.” EiC Baxter is also eager to hear suggestions and commentary about the practices of this new journal. Send feedback to @PlantDirectJ and join the discussions at the Plant Direct network on Plantae.org. Plant Direct 10.1002/pld3.1 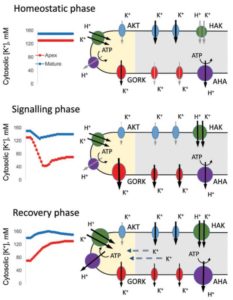 Potassium (K+) retention in the roots and shoots is correlated with increased tolerance to salinity and drought. However, in response to salt stress, K+ efflux  from roots is induced. Shabala investigates three possible reasons for this stress-induced K+ efflux: K+ could leave to charge-balance the Na+ that enters, K+ efflux could trigger programmed cell death for example in the promotion of aerenchyma, and K+ efflux could serve as a metabolic signal that slows growth and elicits defense responses. He provides a scenario through which this latter effect could occur, and suggests that by analogy to transient Ca2+ fluxes, we might start thinking about transient cytosolic K+ fluxes as signals. J. Exp. Bot. 10.1093/jxb/erx238 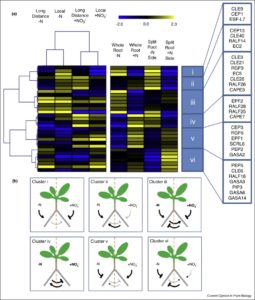 The October issue of Current Opinion in Plant Biology includes several articles that review various topics on the subject of plant nutrition. These span the spectrum of nutrients from trace and metal nutrients to macronutrients. The reviews also span topics such as membrane and tissue-level transport, regulatory signals, nutrient sensors, interactions with microbial symbionts, and the intersections between nutrients and development and nutrients and metabolism.  It’s a great set of articles to brush up on the latest insights into one of the fundamental fields of plant physiology. Curr. Opin. Plant Biol. 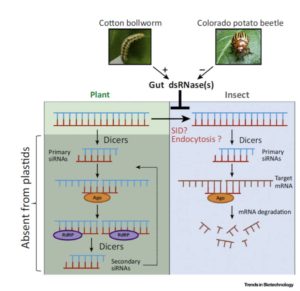 Insects compete directly with people for the energy and nutrients contained in plant matter, so it’s crucial for future food security to develop safe, effective and inexpensive means to control insect pests on crop plants. Zhang et al. review progress in using plant-mediated RNA interference (RNAi) for insect control. Challenges include differential sensitivities across insect species due to different feeding practices or stability of the double-stranded RNA (dsRNA) in the insect gut, and problems with the abundance and stability of the dsRNA needed for RNAi. One promising avenue to ameliorate several of these problems is to engineer plants to produce the dsRNAs in the plastid, as described by the authors. Trends Biotechnol. 10.1016/j.tibtech.2017.04.009 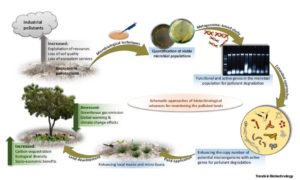 One of the challenges of future food security is to feed a growing population without further impinging on undisturbed ecosystems, which is a primary goal of efforts to increase yields. At the other end of the equation, Tripathi et al. address opportunities to recover degraded lands for sustainable development. They describe methods for removing metals and organic pollutants from soils, ranging from microbe- and plant-remediation efforts, to nanobiotechnology and biosensors for environmental monitoring. Further, the authors propose that, “such restoration activities must be targeted to derive additional benefits like soil carbon sequestration, biomass and biofuel  production, and for obtaining bioproducts for industrial benefits.” Trends Biotechnol. 10.1016/j.tibtech.2017.05.001

Ethnophytotechnology: Harnessing the power of ethnobotany with biotechnology ($) 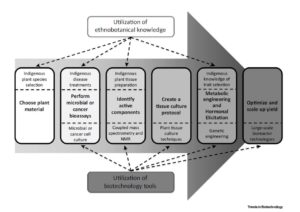 De la Parra and Quave describe the fascinating intersection of ethnobotany and biotechnology, which they define as ethnophytotechnology: “the use of plant biotechnology to improve or enhance the inherent economic or culturally valuable traits of plants as described and influenced by ethnobotany”. They observe that by applying modern tools to “thousands of years of indigenous knowledge,” drug discovery and production can be accelerated. They describe synergies between biotechnology and ethnobotany at every stage of drug development, from choosing plant material to optimizing production, and they identify opportunities for further development of the ethnophytotechnology strategy. Trends Biotechnol. 10.1016/j.tibtech.2017.07.003 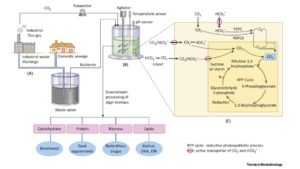 Electricity-generating power plant produce CO2, and industrial and household waste water contains inorganic nutrients that can pollute waterways. What if both of these pollutants could be put to good use, for example in a growth medium for biofuel-producing algae? Ghosh and Kirin describe the feasibility of such a scheme, and point to opportunities for improving algal strains to be more photosynthetically efficient and more tolerant to other industrial gases including traces of SOX and NOX. Trends Biotechnol. 10.1016/j.tibtech.2017.05.003 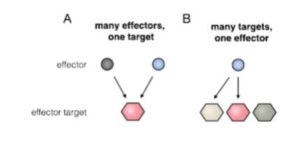 Two of the key players in the plant-pathogen interaction are the effectors produced by pathogens (that “modulate plant physiology to favor host infection and colonization”) and the plant immune receptors (including NLR proteins: nucleotide-binding domain and leucine-rich repeatcontaining) that are instrumental in eliciting host responses. This particularly nice review by Białas and Zess et al. focuses on three effector proteins from the rice blast fungus Magnaporthe oryzae, and from these draws 12 key lessons about pathogen-host interactions. The authors do a good job of explaining key ideas and concepts, which along with good illustrations make these key lessons accessible even to those outside the discipline. bioRxiv  10.1101/171223 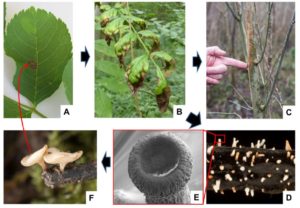 The fungal pathogen  Hymenoscyphus fraxineus that infects European ash (Fraxinus excelsior) has caused a huge epidemic and cost millions of trees their lives. Downie describes the employment of molecular techniques to trace the origin of the fungus in Europe, and describes how the fungal life cycle contributes to pathogen diversity.  He also describes the associative transcriptomics approach that has been used to identify genetic markers linked to pathogen susceptibility. By sequencing RNA from individuals with varying levels of susceptibility, changes in gene expression levels (GEMs, gene expression markers) and SNPs (single nucleotide polymorphisms) correlated with lower susceptibility were identified.  The author observes that associated transcriptomics can be useful for combating other pests, including the insect pest emerald ash borer (Agrilus planipennis). PLOS Pathogens 10.1371/journal.ppat.1006381 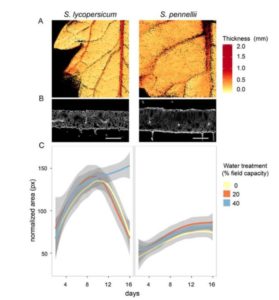 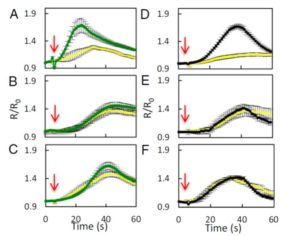 Guard cells are crucial gatekeepers that control entry and exit of gases, water vapor, and pathogens. Rapid stomatal pore closure in response to pathogen perception or the hormone abscisic acid (ABA) is supported by activation of the aquaporin (water channel) PIP2;1. Rodrigues et al. investigated the contribution of PIP2;1 in guard cell responses to the pathogen-associated molecular pattern flg22, and the role of the reactive oxygen signal hydrogen peroxide (H2O2) in this response. Using plants expressing HyPer (an engineered fluorescent H2O2 sensor protein) they showed that pip2;1 mutant guard cells are limited in the entry of exogenous H2O2 in response to ABA or flg22, raising the possibility that PIP2;1 modulates guard cell turgor through both influx of signaling H2O2 as well as efflux of water. Proc. Natl. Acad. Sci. USA 10.1073/pnas.1704754114 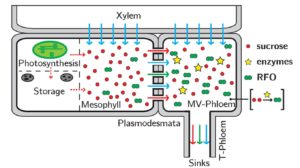 Sugars produced in photosynthetically active mesophyll cells move into the phloem through a process known as phloem loading, but not all plants phloem load the same way. Some use a passive process in which sugars move down a concentration gradient into the phloem, but others use active transport processes. Some species use a “polymer trap” strategy, in which sugars move passively and symplastically (through plasmodesmata) into the phloem where they are converted into oligosaccharides (RFOs, raffinose-family oligosachharides). In this work, Comtet et al. develop a kinetic model to better understand the physical and chemical mechanisms as well as selective advantages of plasmodesmatal transport and polymer trapping. Their model supports the interpretation that polymer trapping can provide reasonable sucrose export rates in plants with the specialized plasmodesmata found in these species, and it provides the opportunity to explore novel approaches to increase photosynthetic efficiency through enhanced phloem loading.  Plant Physiol. 10.1104/pp.16.01041 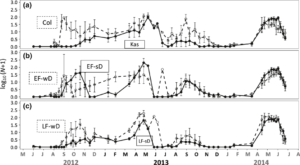 Local adaptation and plant fitness (how plants perform on those localities) are strongly influenced by the seasonal timing of germination and flowering. Germination timing affects when a plant flowers and the selective environment under which flowering occurs. The other way around is also true, timing of flowering influence when seeds are set and dispersed, as well as the environment seeds would have when they germinate. Although genetic variation (set of alleles that confer plasticity in responses) associated to these traits has been extensively studied, the contribution of this variation for timing of seed germination and flowering on life history expression and fitness over multiple generations in natural conditions has been overlooked. Taylor et al. show that genetic variation for dormancy and flowering time influences phenology and life cycle expression across multiple years and generations in the field. However, population growth rates (fitness) were not affected, suggesting variation associated with expression of differing life cycles could coexist in a certain environment. Plants integrate information to adjust their life cycles to seasonal environments; shedding light on the complexity of the underlying genetic mechanisms and their interaction with the environment is a extremely compelling task. (Summary by Gaby Auge) New Phytol. doi:10.1111/nph.14712 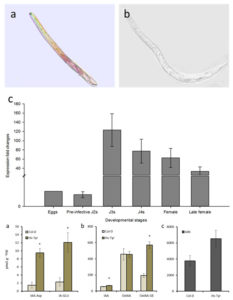 The nematode Heterodera schachtii is a parasite of the sugar beet.  Understanding how H. schachtii parasitizes the plant is crucial to develop tools to minimize infestation and crop losses.  From the H. schachtii transcriptome, the authors identified the sequence of a putative secreted effector protein containing a tyrosinase domain, termed Hs-Tyr.  Hs-Tyr mRNA expression peaked during the parasitic feeding stages of the nematode life cycle, and RNAi silencing of Hs-Tyr decreased nematode robustness.  Hs-Tyr transcripts were localized to the esophageal glands, suggesting the protein could be secreted to help establish nematodes in the sugar beet.  Expressing Hs-Tyr in Arabidopsis increased susceptibility to nematode infection while increasing levels of the ethylene precursor ACC, the auxin precursor indole-3-acetonitrile, and auxin metabolites. (Summary by Daniel Czerny) Sci. Reports 10.1038/s41598-017-07269-7

Viewpoint: Signalling by potassium: another second messenger to add to the ...