Plant seed oils (such as canola oil, sunflower oil, and soybean oil) are important for the human diet and store energy vital to support seedling development. Therefore, there is tremendous interest in understanding the regulation of seed oil biosynthesis. Triacylglycerols (TAGs) are the major form of seed oil in plants, and de novo fatty acid biosynthesis in plastids provides precursors for TAG formation (Baud 2018). 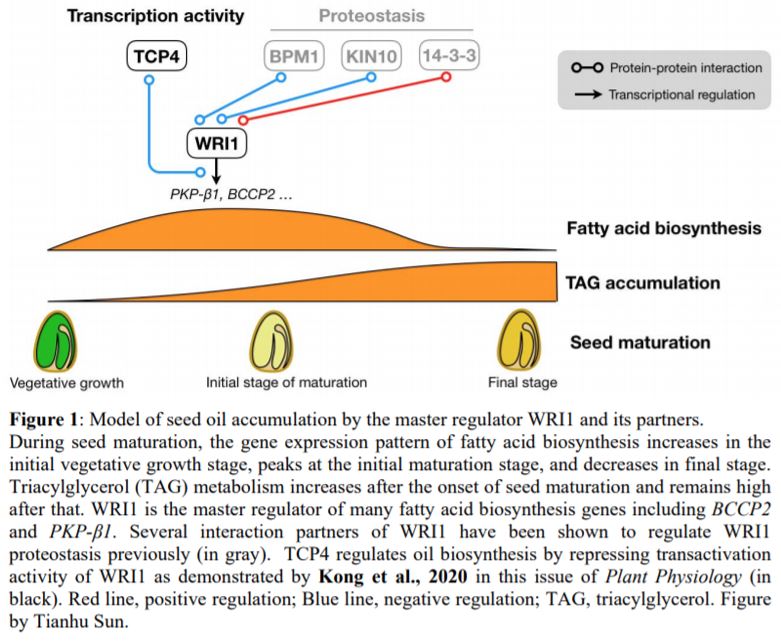 The model plant Arabidopsis thaliana (Arabidopsis), a close relative to a major oilseed crop Brassica napus, has become an ideal system to investigate seed oil biosynthesis. Over a decade ago, an Arabidopsis mutant wrinkled1 (wri1) with 80% reduction of seed oil content was isolated (Focks and Benning, 1998). It was subsequently identified as a loss-of-function mutant of WRI1, a master transcriptional regulator of fatty acid biosynthesis (Cernac and Benning, 2004). In recent years, several interaction partners of WRI1, such as BTB/POZMATH 1 (BPM1) (Chen et al., 2013), 14-3-3 proteins (Ma et al., 2016), and the protein kinase KIN10 (Zhai et al., 2018), have been identified as regulators of WRI1 proteostasis (Figure 1). However, considering the crucial role of WRI1 in seed oil accumulation, how WRI1 activity is fine-tuned to regulate fatty acid biosynthesis is still incompletely understood.

In this issue of Plant Physiology, Kong et al. (2020) provide new insight into WRI1 function by demonstrating that a TEOSINTE BRANCHED1/CYCLOIDEA/PROLIFERATING CELL FACTOR (TCP) transcription factor, TCP4, binds to WRI1 and negatively regulates seed oil biosynthesis through the repression of WRI1 transactivation activity. The authors searched for protein-protein interaction partners of WRI1 by a yeast two-hybrid screen. Several TCP transcription factors (TCP4, TCP10, and TCP24) were obtained and the interactions were further confirmed by bimolecular fluorescence complementation (BiFC). Although TCPs are involved in various plant developmental processes, their role in fatty acid biosynthesis was not documented previously.

While the expression pattern of TCP4 is consistent with it having a role in fatty acid biosynthesis, the authors sought additional genetic evidence to support its participation. They examined the seed oil content of several mutant lines: single mutant tcp4, triple mutant tcp2 tcp4 tcp10, and a mutant jaw-D that shows repression of several TCP genes (including TCP2, TCP3, TCP4, TCP10, and TCP24). Compared to wild type, all lines with decreased expression of TCP4 showed increased seed oil levels while the mutation or repression of other genes showed minor additive effect. These results clearly indicate that TCP4 is the major repressor of seed oil content.

Next, the authors asked how TCP4 works together with WRI1 to regulate oil biosynthesis. A convenient and robust method to functionally validate oil biosynthesis regulators is to transiently express the regulator in Nicotiana benthamiana leaves and then examine oil accumulation (Ma et al., 2015). Kong et al. (2020) tested the effects of different combinations of TCPs and WRI1 with this method. As expected, expression of WRI1 induced oil accumulation. Co-expression of TCP4 and WRI1 led to a decreased level of oil production as compared to TCP4 alone, while co-expression TCP10 or TCP24 with WRI1 showed no change comparing to WRI1 alone. These results clearly show that TCP4 represses WRI1-induced oil biosynthesis.

Previous work showed that fatty acid biosynthesis genes BCCP2 and PKP-β1 are direct transcriptional targets of WRI1 (Schommer et al., 2008). In this work, the authors found that these WRI1 target genes are down-regulated in a TCP4 over-accumulation line. Next, they examined the effect of TCP4 and WRI1 interaction on WRI1 function. Although TCP4 itself does not show transactivation activity, the addition of TCP4 to WRI1 represses the transactivation activity of WRI1 on the promoters of BCCP2 and PKP-β1. However, whether TCP4 competes at the WRI1 binding site, or inhibits WRI1 activity though binding to a novel site of these promoters needs to be further addressed.

This work also raises additional questions. For example, the molecular mechanism of how TCP4 represses WRI1 transactivation is not yet clear and the authors proposed several possible models which could be tested in future. Not only oil, but also other storage compounds such as starch and protein will accumulate during the seed maturation process. Thus, the partitioning of carbon between these compounds is assumed to be balanced at certain stages. However, a recent study showed that the seed oil yield can be boosted without compromising storage protein and starch in seeds, and also without negatively impacting shoot biomass (Li et al., 2020). Therefore, the negative control of WRI1 and fatty acid production by TCP4 may serve to fine-tune fatty acid biosynthesis in an as yet undefined tempo-spatial manner.

Focks N, Benning C (1998) wrinkled1: A novel, low-seed-oil mutant of Arabidopsis with a deficiency in the seed-specific regulation of carbohydrate metabolism. Plant Physiol 118: 91-101 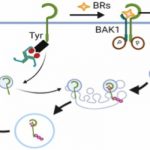 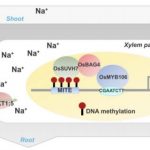