Pyrimidine nucleotides (e.g., dCTP, dTTP, UTP, and CTP) are essential building blocks for DNA and RNA synthesis in all organisms. In plants, sucrose and cell wall polymer synthesis depend on pyrimidine nucleotide-derived substrates, such as UDP-glucose, and important classes of membrane lipids are made using CDP-activated substrates. In addition to de novo synthesis pathways, pyrimidine nucleotides are produced via salvage pathways. Uracil is salvaged by uracil phosphoribosyl transferase (UPRT; EC 2.4.2.9), using phosphoribosyl pyrophosphate as substrate to produce UMP, while uridine is salvaged by uridine kinase (UK; EC 2.7.1.48), which uses ATP to phosphorylate uridine to UMP. In this manuscript (Ohler et al., 2019), the authors show that pyrimidine salvage in Arabidopsis occurs predominantly via uridine/cytidine (see figure), with the main enzymes being the bifunctional cytosolic uridine/cytidine kinases 1 and 2 (UCK1 and UCK2; EC 2.7.1.48). A double knockout of UCK1 and UCK2 leads to severe growth restrictions in green tissue (Chen and Thelen, 2011), indicating that Arabidopsis relies on both de novo pyrimidine synthesis and pyrimidine salvage via cytosolic uridine/cytidine. These enzymes have a UPRT domain but do not exhibit any UPRT activity. The only enzyme responsible for UPRT activity in Arabidopsis is the chloroplastic UMP pyrophosphorylase (UPP; EC 2.4.2.9), which is involved in pyrimidine salvage via uracil, but despite being functional, this plastidic uracil salvage pathway has a non-essential role in Arabidopsis.

The light-dependent expression of UPP shown by the authors and the wild-type-like growth of upp-1 in darkness, shown by Mainguet et al. (2009), further support a function for UPP in photosynthesis establishment. However, it was an open question whether the UPRT catalytic activity of UPP or a secondary, non-catalytic function (i.e. a moonlighting function) is essential for photosynthesis establishment. Addressing this question, the authors showed by genetic complementation experiments that the lethal phenotype of upp-1 could not only be rescued by expression of wild-type UPP under the control of the UBQ10 promoter, but also by expression of mutated UPP proteins with almost no UPRT activity, generated by substitution of amino acids that are critical for catalysis. However, expression of a catalytically active UPP from a non-photosynthetic organism, Escherichia coli, in the Arabidopsis upp-1 did not rescue the phenotype. These results indicate that UPP plays a vital role in the establishment of photosynthesis, but this is independent of the protein’s UPRT activity. Interestingly, the two enzymes downstream of UPP in the plastidic uracil salvage pathway, UMP kinase (PUMPKIN; EC 2.7.1.14) and nucleoside diphosphate kinase 2 (NDPK2; EC 2.7.4.6), are also moonlighting proteins that function in photosynthetic mechanisms (Schmidt et al., 2019; Dorion and Rivoal, 2015). These findings not only reveal a crucial role for UPP in establishing photosynthetic capacity, but also add to a growing list of moonlighting plant enzymes that have dual catalytic and non-catalytic functions (Claeys et al., 2019).

Moving on Up: An MCTP-SNARE Complex Mediates Long-distance Florigen Transpo... 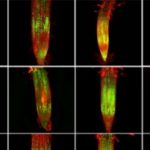 The same but different: CoMoVa, an algorithm to identify functional variation...
Scroll to top